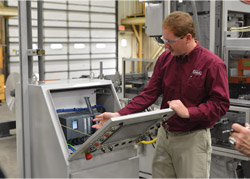 As Burr Oak celebrates its past this year, it also looks to the future. The company recently implemented the latest hardware and software from Siemens Industries — TIA Portal engineering software and S7-1500 series PLCs, respectively — in its new FP 400 fin press. As a result, engineering time has been reduced by about 30 percent.

“We weren’t holding a stopwatch to our activities, but everything moves faster with TIA Portal,” said Adam Broadwater, research and design engineer at Burr Oak. “We make and ship 20-50 fin presses annually. In the past, it took at least two hours of a software engineer’s time per machine to debug the errors. Those hours are saved because the technicians can debug the units themselves now.”

Burr Oak Tool president Brian McConnell said the relationship with Siemens has been a productive one, and he hopes it will help him reach his goal of growing the company and expanding its market share in years to come.

“We’ve been blessed, and the market has been kind to us,” McConnell said. “We’re going to land just short of $70 million this year, and I’d like to get to $100 million and 400 [employees]. That will maximize our profitability and innovation.”