SAVANNAH, Ga. — Mingledorff’s Inc. commemorated 75 years of history during its 2014 dealer meeting celebration in Savannah, Ga. The three-day event hosted dealers to a tradeshow, tailgate party, brand breakouts, special speakers, a comedian, and a new truck giveaway. The conference began with a welcome from David Kesterton, president and CEO of Mingledorff’s. He acknowledged the long history of the company as well as the foundation of leadership that the company was built on.

“Lee Mingledorff started the company and along the way there have been many generations of leadership,” said Kesterton.

Looking back at 75 years and celebrating was part of the program, but looking ahead and preparing for what is to come was also a strong focus. 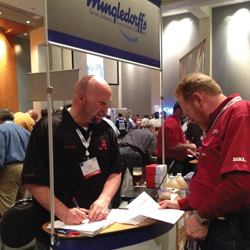 In a market recap, Kesterton announced that 2013 product sales in residential standard, residential mid-tier, residential high efficiency, commercial, and aftermarket had all risen 21, 20, 58, 2.1, and 5.4 percent, respectively.

“We think the outlook for 2014 is a positive one,” said Kesterton. “Be prepared to take advantage of this year, especially with high-tech systems and connectivity.”

Chris Nelson, president, Carrier Residential and Commercial Systems North America, provided an industry outlook for 2014. In the presentation, he indicated that GDP and unemployment are heading in the right direction, single family homes are on a recovery path, and housing starts were on their way up. Nelson cautioned that these factors would likely be a long climb, noting that the effects on the HVAC industry could look like continued market recovery with low single-digit growth.

“In residential and commercial we expect a lot of what we saw in 2013 to be what we see in 2014,” said Nelson. “The market is recovering and many are asking, ‘How do I take advantage of this and where do I invest?’ ”

Bob Swilik, Advanced HVAC Systems manager, Carrier Corp., answered these questions by taking a look at the current trends in the technology market. He noted that 56 percent of adults own a smartphone, up from 35 percent in 2011. He also pointed out that for 18-29 year olds, household income doesn’t seem to affect smartphone ownership.

“There are 7.9 new apps per day and this number is consistently increasing,” said Swilik. “The typical person will use eight apps per day and this usage varies widely. When it comes to energy apps, however, there is an average of 6.9 mobile log ins per week. That is 15 percent more than the average social networking app.” 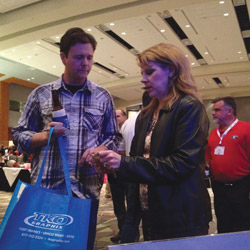 According to Swilik, the smartphone market is beginning to experience saturation and the next market gaining is tablets. Beyond tablets is a trend towards things, not people being connected to the Internet.

“Over 50 percent of Internet connections are things,” explained Swilik. “Everyone is fighting for people’s homes with connectivity and they are starting with security and energy management.”

These factors are lending toward the smart optimization of the HVAC system so that customers can save money, according to Swilik.

Swilik went on to break down the three points of entry into the home — home energy management, lifestyle and convenience, and fire and security.

“We want the homeowner to call you. We want homeowners to tell these other companies that they want to keep their energy management system,” he said. “I encourage you to get started and then figure out the things you don’t know.”

Joe Calloway was the keynote speaker and his presentation centered on being the best at the most important things. He is a performance coach and advisor to companies across the nation and worldwide. During his presentation, Calloway asked attendees, “What do top performers do, that any of us could do, if we just choose to do it?” 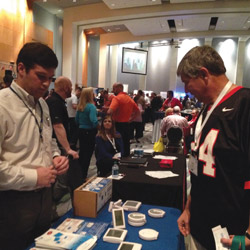 His answer came in an examination of companies like Apple, Google, Amazon, and Zappos. Taking a first look, the audience didn’t find a unifying theme for these companies, but in discussing what each of their core services are, the fact that they make things easy for customers surfaced repeatedly. Besides conducting business simply, Calloway encouraged attendees to win at the basics of business. This is the crux of his new book, “Be the Best at What Matters Most.”

According to Calloway, businesses win the basics by starting with quality products and quality work. Moving from there, a business will have to answer the following six customer service questions.

6. Who wants my business?

Once these have been answered, Calloway suggests going back and improving what needs to be improved and getting better at what a company already does extremely well. With these pieces of information in place, Calloway went on to discuss being a thought leader and implementing new ideas. He warned attendees not to get stuck in a pattern of thinking of new plans and solutions but not putting them into action.

“From a dead stop it takes a lot of energy to get going,” he said. “Fear of the unknown and making mistakes keeps people from taking action as well. We will never know what we really can do unless we try.”

This year, Mingledorff’s combined its tradeshow with a tailgate party. In the center of over 60 vendors stood the company’s booth where attendees could purchase products at show special pricing and meet more of Mingledorff’s staff. From there, vendors and food stations branched out across the floor. Giveaways, raffles, swag, and the scent of a football stadium filled the room as attendees visited with each other and their vendors, as well as met new vendors.

In the expansive lobby outside the tradeshow, a cornhole tournament was held. Teams of four competed for a chance to win the Carrier and Bryant custom cornhole sets.

These events, along with business breakouts, dealer training, and brand breakouts kept attendees moving from one event to another. Dinner and entertainment were provided and comedian James Gregory kicked off the night with a few laughs. His performance had the audience roaring with laughter. The evening ended with awards and the big truck giveaway, followed by music from The Sweetwater Junction Band, and dancing.

Find out more about Mingledorff’s programs, services, and events at www.mingledorffs.com.

Tips, Maintenance, and the Future of Boiler Technology

The Benefits of High-End HVAC, and How to Service and Sell It