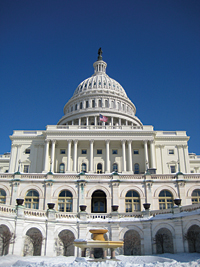 A settlement in the ongoing regional standards lawsuit may be less than two weeks away.

An abeyance motion, filed Tuesday in the U.S. Court of Appeals for the D.C. Circuit by the U.S. Department of Energy (DOE) — with the consent of all parties and intervenors involved in the case — has suspended all court proceedings until March 3 to accommodate pending mediation.

Tuesday’s abeyance motion reads: “With the assistance of a mediator, through this Court’s appellate mediation program, all parties and intervenors are nearing agreement on final terms of a settlement of this case. We anticipate that the negotiations on settlement and implementation will be completed by March 3, 2014. In addition, the government will seek approval of the settlement pursuant to 28 C.F.R. Part Y. We will undertake our best efforts to obtain such approval within the same timeframe.”

The DOE also filed an abeyance motion in November 2012, less than two months before settling with the American Public Gas Association (APGA) and filing a joint motion with APGA to vacate and remand for further rulemaking the regional standards for nonweatherized natural gas furnaces. That joint motion has not yet been accepted by the court.

To view a timeline of events in the regional standards case, visit http://bit.ly/RegionalStandards.