Project Files: No Horsing Around with Ventilation 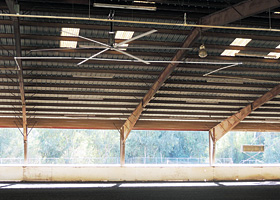 Objective: To provide ventilation and effective cooling for spectators and participants — both human and equestrian — at Riverside Rancheros’ covered arena.

Work Completed: Riverside Rancheros’ open-sided, 49,000-square-foot arena was built in 1987 for equestrian competitions, but the structure’s metal roof radiates heat. The organization’s location in a valley also prohibits natural breezes from developing, often causing temperatures to soar to 100°F or higher in the arena, putting competitors and spectators in danger. To help keep both the horses and humans comfortable and safe, Riverside Rancheros considered cutting vents into the metal roof, but after visiting MacroAir’s nearby headquarters and seeing high volume, low speed (HVLS) fans in action, the organization decided to install a 24-foot MacroAir AirVolution fan in the center of the arena. In the 330-foot-long facility, airflow may be felt as far as 150 feet from the fan. Since the fan’s installation, Riverside Rancheros has seen a 10-20 percent increase in contestant participation, with very little increase in cost to operate the fan.

Quote: “We were concerned the fan would scare the horses, but there is no noise at all. We’re quite happy with the fan. All the cowboys and cowgirls are really happy with it, too. People who see the fan are in awe because of its large size and slow movement, but it’s effective.”
- Louie Tavaglione, member, Riverside Rancheros board of directors