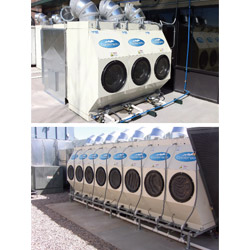 Work Completed: At the NSIDC, the data center occupied just 2 percent of the total square footage of the building, though it accounted for more than half the building’s energy consumption — half of which went just to cooling the equipment. At Green House Data, a 100 percent wind-powered data center, the server room required reliable and constant cooling to protect its critical IT infrastructure. To cut cooling costs at both facilities, eight Coolerado M50 air conditioners were installed inside the NSIDC’s data center and 14 Coolerado M50 air conditioners were installed inside Green House Data’s server room, reducing energy consumption at the facilities by roughly 70 and 40 percent, respectively. At both facilities, a rooftop air handler brings in outside air, which is then conditioned by the Coolerado air conditioners. The Coolerado units run fresh outdoor air through air filters and then a heat and mass exchanger (HMX) to deliver cool air using one-tenth of the energy of traditional air conditioners. In months when outside air is cooler than inside air, the units filter the cold outside air and pump it directly into the space for free cooling. The system also regulates the air and adds humidity when the data center gets too dry.

“We have seen a 70 percent reduction in data center power usage, or 491,000 kWh, by utilizing Coolerado solutions in the last 12 months – a statistic that is further amplified by the growing density and energy usage across our entire campus.”
- David Gallaher, technical services manager, NSIDC