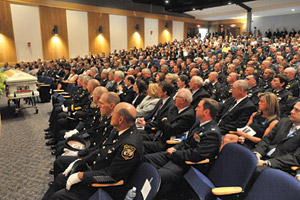 When Jose Torres, a popular police officer in Westfield, Mass., was tragically killed on traffic duty last July, the Firtion Adams Funeral Home faced a difficult challenge: The only local venue large enough to accommodate the crowd did not have air conditioning, and the town was in the midst of a sweltering heat wave. Portable cooling units donated by Atlas Sales & Rentals Inc. enabled the community to host the funeral service in comfort.

James R. Adams, one of the owners of the funeral home, explained, “We met with local officials to decide where we could hold the service and televise it at the same time. Westfield State University (WSU) was the only place this could happen. However, their main auditorium had no air conditioning since it is not typically needed during the academic year.”

Adams was familiar with Atlas Sales & Rentals and called Rob Atkocaitis at the company’s nearby office in Westfield. Atkocaitis visited WSU to meet with the onsite electricians and Dr. Curt Robie, assistant vice president for facilities and operations.

“The large expected turnout was going to add a lot of extra heat to the space, so the goal was to install as much cooling as possible,” said Atkocaitis. “We determined that there was enough power to operate three 5-ton units.” He recommended using three Office Pro 60 portable air conditioners manufactured by MovinCool/DENSO Sales California Inc. The Office Pro 60 is a 5-ton air-cooled spot cooler rated at 60,000 Btuh. Upon hearing that the project had a tight budget, Atlas offered to donate the equipment for the event.

“The next challenge was placing the units to provide a balance of cooling,” Atkocaitis said. “The units had to be fairly close to the electrical panel and also close to the back of the stage to allow us to exhaust the hot air. We had to add 50 feet of power cord to the units in order to space them out on the stage. We installed one unit on each side of the stage and one in the middle. The two units on the sides were exposed and could be seen by everyone. The unit in the middle was hidden behind a curtain, and we added ducting to blow cool air under the curtain.”

All of the units were exhausted through a loading dock behind the stage, and the condensate drain lines followed the exhaust duct.

Operating noise also had to be addressed because the microphones for the TV cameras were extremely sensitive, and air velocity through the units was a concern. By removing the front grilles from the two exposed units, Atlas was able to diffuse the sound to a level where it did not interfere with the speakers onstage.

“Atlas installed the units the day before the funeral and the university ran them all night to bring the temperature down to a comfortable level,” said Adams. “There were 600 people in the main auditorium and over 400 more watching the televised service from a nearby location. Despite outdoor temperatures in the 90s, the portable cooling kept the auditorium in the low 70s to maintain a comfortable indoor environment, even for the police force in full-dress uniform. Also, Atlas’ solution to the noise problem was very effective. You really couldn’t hear the units at all. Everything worked very well for us.”

In addition to Officer Torres’ many friends, family, and colleagues in the police department, a number of dignitaries attended the service, including the governor of Massachusetts and the mayor of Westfield, who publicly thanked Atlas for donating the cooling equipment.