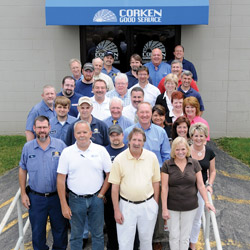 Many consider good customer service to be a key success principle for HVACR distributors. Customer service, however, isn’t found only in a kind attitude and a free coffee. Often it can be found in innovative solutions for daily undertakings. These innovations, along with a wary eye on the future, have helped Corken Steel Products Co. to continue its success. The family-run distributorship based in Florence, Ky., has found new ways to improve both its services to customers as well as its bottom line despite the turbulent economy.

Corken Steel has been in business since 1955, and its invoicing system has changed over the years. The most recent change came in June 2007 when the company engaged Billtrust as its invoicing service provider.

Prior to this change, one full-time staff member was devoted to the printing, sorting, and mailing of all invoices. The process required a fair amount of man hours as well as transit hours, and as credit manager for Corken Steel, Rob Richardson was continually on the lookout for ways to help the company maximize sales and minimize risk. He had heard about Billtrust at a HARDI meeting and decided to look into the process.

“After contacting them, Billtrust came to our facility and gave us an overview of the program,” said Richardson. “From there we discussed the ins and outs and began an ROI study.”

The question of ROI is one that most companies consider before investing in new services and understanding this, Billtrust came into Corken Steel and conducted a brief ROI study.

“We gave them a fair amount of information such as how many invoices we were printing per month, what the cost of our paper and envelopes were, and how much was being spent on postage each month,” noted Richardson. “Billtrust crunched these numbers and then annualized them in order to estimate for us how long it would take before we recuperated our investment.”

With a three-month ROI predicted, Corken Steel began the process of implementing Billtrust’s invoicing services. According to Richardson this service is saving the company a large amount of money.

“They can actually mail a letter cheaper than we can, even though we are paying more,” he said. “Even though the postage might be cheaper for us to do it ourselves, in the long run and considering all other resources, BillTrust is cheaper. We aren’t using any resources, be they paper or people.”

With the ROI study complete and Corken ready to move, Billtrust began helping the company to redesign its invoices. That meant trading in the dot-matrix printer and specially pre-printed paper for a blank invoice and starting from scratch. Richardson described this process as painless. Billtrust didn’t leave the redesign up to Corken Steel, but it didn’t require that the company use a cookie cutter invoice.

“The company gave us a designer to work with on the invoices to make sure everything was right and designed the way we wanted,” explained Richardson. “Then they send it back to you for approval.”

While this process was occurring, Corken Steel had one of its IT programmers work through the technology side of the process with Billtrust’s programmers. Together they set up system compatibility so that a nightly EFT file could be sent.

“It was fairly simple to be honest and it went a lot smoother than we imagined it would go,” he said. “Once these processes were complete we ran a test file. When that came back correct and we were happy, Billtrust took the system live and everything went flawlessly.”

With the new system online, Corken Steel’s customers were still able to choose whether they wanted to receive their invoices via fax or mail, but there were now additional features that they could take advantage of as well.

One of these advantages is the ability to receive invoices via email as well as access and pay their accounts online. Corken Steel can access these accounts as well. For this access, Billtrust provides a CustomerCare interface and an Invoice Gateway interface. Corken Steel provides a link to these password protected systems on its website.

“What has happened is, if someone is missing an invoice, we can get the replacements to them faster because we can now access the interface, and we can email them right away,” explained Richardson. “In the past we would have to print them and stick the replacement invoice in the mail. This was a common occurrence as well as a time and a money waster. There are customers every month that we are sending invoices to that for some reason didn’t receive the invoices or have lost them. Now they aren’t getting their replacements after the payment is due, they are getting them before the payment is due. This is indirectly helping lower our delinquency rates a little.”

In changing its invoice system, Corken Steel discovered both tangible and intangible returns. Tangible returns included the reduction in postage savings which totaled approximately 64 percent in 2012. Another tangible return was the measurable increase in efficiency.

“Billing and invoicing is all Billtrust does and because of this they can do it more efficiently than the distributor,” noted Richardson. “As for the one person we had handling all our invoicing, Billtrust freed her up to do other things for
the company.”

As for intangible returns, Pete Huddleston, MIS director at Corken Steel, pointed out the new image that the company’s invoicing has taken on since switching to Billtrust.

“Outsourcing the delivery of our invoices and statements using Billtrust was one of the best decisions our company made. The entire process, start to finish, was completed in about 4½ weeks including a complete invoice and statement redesign,” he said. “Our documents now take on that sharp professionally printed look and are delivered to our customers in a timely manner. With the savings we are realizing, we should have made the move to Billtrust years ago.”

One thing that impressed Corken Steel about the Billtrust program was the fact that the company listens to its customers’ feedback and that it is consistently improving its software options based on this feedback.

“They didn’t just start this program and then leave us go. They are constantly making it better,” said Richardson. “They actually take advice from their customers, from us.”

Richardson was on the company’s very first advisory committee where Billtrust gathered input from its current customers and implemented changes based on this input.

“If there is something we want to see in the program we can actually tell them. ‘Hey you know what? I think this feature is going to make this program better,’ and they will look at it and make some of those changes,” he said. “Billtrust is very receptive of their customers telling them and giving them changes and then doing it.”

The company rolls out these changes in the form of new version upgrades, which can include customer requested and designed features. One of the latest features the company added are integrated QR codes for biller statements. According to a March press release, the service lets consumers and businesses pay their bills online in a single step by scanning the QR code with a suitably equipped smartphone.

With this new addition to their suite of payment services, Billtrust can imprint a QR code on any outbound billing document. When the recipient scans the code they are taken to a mobile Web page for instant electronic payment. Pertinent billing information is already entered on the page, making payment a streamlined process. The QR code can also be used to bring a user to an online billing site where enrollment can be initiated.

“QR code availability is one more way Billtrust meets the convenience needs of both billers and their customers,” said Flint Lane, Billtrust CEO and president. “It’s no secret that the mobile web is expanding rapidly. QR codes help billers reach their consumers who are interacting with them via smartphones and tablets. For end customers, payment via QR code is perhaps the fastest, easiest way yet to securely and accurately make payments from anywhere — at home, at work, or
when traveling.”

“QR codes printed on bill statements can provide an easy and convenient bridge for traditional paper customers to make electronic payments,” commented Robert Unger, AAP, senior director, NACHA. “The QR Encoding for Bill Payment Guidelines represent an industry effort to standardize the experience for customers, providing reliability and certainty as well for billers, financial institutions, and service providers that enable consumer bill payment applications. We are excited about working with companies like Billtrust to rally the industry around the voluntary standards and creating a market for QR code usage.”

To encourage usage, Billtrust is making “QR Code for Billers” available at no charge for certain customers.