This website requires certain cookies to work and uses other cookies to help you have the best experience. By visiting this website, certain cookies have already been set, which you may delete and block. By closing this message or continuing to use our site, you agree to the use of cookies. Visit our updated privacy and cookie policy to learn more.
Home » Geo Semantics: Heat Pumps Are Renewable Energy Sources
Air-Source Heat PumpsResidential Geothermal Heat Pumps

I recently read an Internet posting asserting that heat pumps, both air-source and geothermal, should not be considered renewable-energy heat sources. The author pointed to the fact that such heat pumps are driven by electricity, which may come from a power plant that burns coal or natural gas. Thus, electrically driven heat pumps are essentially like refrigerators; they just move heat from one location to another.

While I agree that heat pumps do move heat from one location to another, I strongly disagree with the premise that air-source and geothermal heat pumps are not renewable-energy heat sources. To support this position, I point to the ultimate source of low-temperature heat which is absorbed by the evaporator of these heat pumps. That source is the sun.

In the case of geothermal heat pumps, this solar energy is temporarily stored within the upper portion of the earth’s crust for a few weeks or 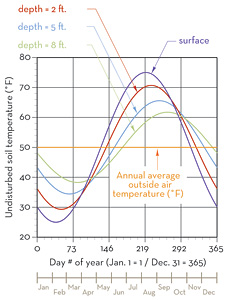 months until it is needed by the load. This is especially true for systems with horizontal earth loops. The graph to the right (Figure 1) shows how the undisturbed soil temperature at relatively shallow depths varies above and below an average value, based on depth and time of year.

It’s easy to see that deeper soils experience less variation in temperature. The solar heat gains of summer and cooling periods of winter simply have less effect at greater depths. It’s also evident there is a phase shift in the sinusoidal temperature curves based on depth. Deeper soils reach their maximum temperatures later in the year. For example, soils at 8 feet of depth reach their maximum temperature several weeks later than temperatures at the surface. This behavior is a direct result of solar heat gains combined with the thermal-storage effect of soils.

Solar heat gain also is the ultimate source of heat for geothermal heat pumps with vertical earth loops. Even loops reaching 500 feet into the earth are only penetrating about 0.4 percent into the earth’s crust (where its thickness is about 40 km). In most locations, very little heat from magma under the earth’s crust influences the heat being absorbed by the earth loop of a geothermal heat pump. The deeper the soil, the less the annual variation in temperature. What variation there is will be centered on the average annual air temperature at the location.

Few would argue that solar heat gain is responsible for the low-grade heat absorbed by air-source heat pumps. The more solar energy a given location gets, the warmer the outdoor air temperature.

The thermal performance of heat pumps, when operating in heating mode, is measured by an index called coefficient of performance (COP). COP is the ratio of the heat output from the heat pump divided by the energy input to operate the heat pump.

For a geothermal heat pump operating at a COP of 3, two units of heat are coming from the ground (e.g., free solar-sourced heat) and the remaining unit of heat is coming from electrical energy operating the compressor. Thus, two-thirds, or 66.6 percent, of the heat delivered to a building is, ultimately, from heat driven into the soil by the sun.

Now consider a solar-thermal water-heating system, which just about everyone would consider a renewable energy system. Suppose this system supplies 66.6 percent of a home’s hot-water needs from absorbed solar energy and the remaining 33.4 percent from the backup electric element, which may be supplied from a power plant that burns coal or natural gas. Again, two-thirds of the energy delivered for use came from the sun, and the remaining one-third came from electricity.

So, based on this comparison, both systems deliver the same ratio of useful effect divided by required electrical input. Why should the solar-thermal system be labelled “renewable” and the geothermal heat pump system “nonrenewable”?

Still, the author of the posting does have a point that few people really understand this. After all, most of us took earth science at some point during high school. We learned about all this molten rock that the earth’s crust floats around on. As I recall, geothermal heat pumps were not mentioned once during these classes.

I was once taken to task by a fellow engineer for using the term geothermal heat pump. His point was that these devices should be called ground-source heat pumps. Technically, the source for a refrigeration cycle is always the low-temperature heat being absorbed and the sink is where the higher-temperature heat is dissipated. So, in heating mode, the earth is the source of heat and the term ground source certainly applies.

However, in cooling mode, the source is indoor air that’s being cooled and dehumidified. Thus, to be technically accurate, the same heat pump, operating in cooling mode, should be called a ground-sink heat pump.

The term earth-coupled heat pump avoids the ambiguity associated with both geothermal and ground source. It’s not specific to just one mode of operation. Still, just as the term boiler is still applied to many devices that don’t boil water, I don’t expect the term geothermal to disappear from our industry’s vocabulary anytime soon.

So, based on the ultimate source of the low-temperature heat, I do consider both earth-couple and air-source heat pumps as renewable energy devices. Without the sun, there wouldn’t be much point of setting one of these systems up — or for me writing this column.

Within the context of hydronics, both water-to-water and air-to-water heat pumps will play increasingly important roles in heating and cooling buildings. The electricity needed to operate them, while currently produced in large part by burning coal and gas, will slowly shift to being produced in greater proportions from sources such as solar-photovoltaic systems, large-scale wind turbines, increased use of hydropower, and even power plants that burn carbon-neutral biomass.

These sources position electricity as the universal high-grade energy source that will be used, albeit in very judicious and thermodynamically appropriate ways, to heat and cool buildings. Heat pumps will be the linkage between all that free solar-derived, low-temperature heat floating around and beneath, us, and the comfort humans require in their structures.

If you are selling heat pump systems, take time to explain to potential customers how they work and where the free heat ultimately comes from. They will feel good about it and better appreciate how important solar energy is.

Examining the effects of flow reversal in circulators

The Origin of Hydraulic Separation

The third edition of his book, Modern Hydronic Heating,
is now available. For details, visit www.hydronicpros.com.