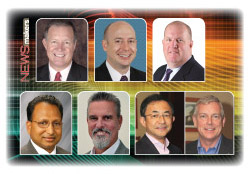 As 2012 races to a close,The NEWS is proud to celebrate those making headlines this year. Rather than lounge around and wait for the industry to come to them, these pacesetters rushed to the forefront, leading by example.

This year, each honoree brings a unique ingredient to the NEWSmaker recipe. One NEWSmaker leaped from HVACR contractor to congressman, while another spent the majority of the year with Congress, lobbying on behalf of issues most pertinent to HVACR distributors.

A third NEWSmaker stood up to a national television network, defending the industry from false claims broadcast through a counterfeit sting operation, while yet another gained admiration for his influential alternative-refrigerant research.

Another set of industry executives were honored for an acquisition that merged two of the industry’s largest manufacturing companies, and, last but not least, our final headliner is recognized for his commitment to the advancement of the geothermal industry.

And, while each selection is different, they all exemplify what it means to be a leader. The NEWS is proud to honor its NEWSmaker class of 2012. For the full story on each one, see: