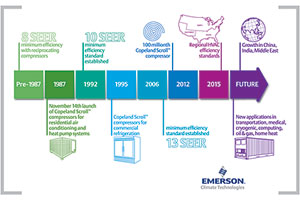 It was 1987 and while the Copeland Scroll technology was entering the HVAC marketplace, Alf was on television, Peter Gabriel was on the radio, and “RoboCop” was playing on the big screen. It would be safe to say that the scroll evolved better than these other 1987 innovations. The technology ushered in a new phase of energy efficiency for the residential HVAC industry and also became a standard in the commercial and refrigeration sectors.

Back in 1987, most air conditioners in the U.S. market were 8 SEER although Congress had just established the implementation plan for a minimum of 10 SEER on residential air conditioners.

“When scroll technology was first introduced to the industry in 1987, 100 percent of the industry was using reciprocating compressors in 8 SEER systems,” said Karl Zellmer, vice president of sales, Air Conditioning Business of Emerson Climate Technologies. “At the time, the U.S. Department of Energy was establishing a government-mandated regulation that required the industry to achieve higher efficiency standards. Proponents for the new efficiency standards acknowledged the limitations of existing compressor technology and stressed the need for a breakthrough that could deliver higher efficiency levels to the industry.”

It was with that backdrop on Nov. 14, 1987 that Emerson’s Copeland became the first U.S. manufacturer to produce scroll compressors for use in residential air conditioning and heat pump systems. The scroll compressors greatly helped the HVAC industry achieve the new efficiency levels required by the government.

As the years have gone by, efficiency levels required by the government have continued to increase. In 1992 when the 10 SEER regulation went into effect, Copeland Scroll reached 1 million in sales and the company began development of scroll technology for refrigeration applications. By 2006 when 13 SEER became the minimum, worldwide scroll compressor installations had surpassed 55 million.

“And we are heading into yet another period of increased regulated efficiencies,” said Zellmer. “In 2015, the minimum will be increased again for certain regions in the U.S., and Copeland Scroll will again be on board many of the new OEM designs that meet the new standards.”

The scroll technology is continuing to progress with the times.

“Today, effective and affordable air conditioning has become an expectation in most areas of the United States and emerging markets around the world,” said Brent Schroeder, president, Air Conditioning Business of Emerson Climate Technologies. “Scroll technology has opened up a world of differentiation opportunities for original equipment manufacturers, enabling the development of more reliable, efficient, cost-effective solutions to provide human comfort. Because of its unique characteristics and versatility, scroll technology continues to evolve, delivering further improved efficiency and performance levels to existing applications, in addition to advanced capabilities to meet the next requirements of the industry.”

Emerson believes that in the next 25 years the scroll technology will expand its leadership position and help the transformation of emerging markets such as India, China, and the Middle East. “The future of scroll technology looks exciting with the introduction of modulation technology and CoreSense compressor electronics,” Schroeder added.

“As the needs of consumers continue to evolve and grow in wealth, conditions are converging to make them ideal candidates for the efficiency provided by scroll technology,” Schroeder said. “Just as the United States market has steadily increased efficiency, we are now unlocking new opportunities in many other parts of the world as new efficiency initiatives are put in place that also look to meet the needs for comfort.”

Emerson points out that the China State Council recently announced that it was allocating approximately $4.2 billion in subsidies to promote the purchase of energy-efficient household appliances, which will include air conditioning units. In addition, the Bureau of Energy Efficiency in India upgraded the energy performance standards for air conditioners about 8 percent.

Emerson believes that the versatility of scroll technology lends itself to further evolution; and as it evolves, it will deliver value in many new applications outside the traditional HVACR segments. These segments include transportation, medical, cryogenic, computing, and oil and gas industries.

One such unique application for scroll technology is in medical refrigeration, such as keeping blood plasma at the required evenly low temperature. Plasma is stored in specialized freezers and it is critically important that the proper conditions for rapid freezing are created and the exact temperature range for storage is maintained. Reliability is extremely important in this application. If an air conditioning unit goes down, the result is unhappy and uncomfortable residents; if a plasma freezer goes down, a hospital can lose its entire plasma supply and lives can be endangered.

Another application is in the transportation and storage of food products. Transport refrigeration and transport air conditioning requires a high level of system performance in some of the most demanding environments imaginable. For instance, refrigerated seagoing containers equipped with scroll technology can provide precise temperature and humidity control that maintains box temperatures to within ±0.5˚F (±0.3˚C). This is critical for perishable products, such as seafood, fruits, and vegetables that require tight climate control to protect quality. Advances with the technology also allow these same containers to easily carry bananas one way at 50˚F and carry ice cream back at -50˚F.

“In its first 25 years of existence, scroll technology has revolutionized the HVACR industry by delivering higher efficiency and greater reliability. The next 25 years offer even more possibilities as the technology continues to evolve to bring higher performance levels to new markets and applications,” Zellmer said.