According to NREL, the DEVAP air conditioner is capable of providing superior comfort for commercial buildings in any climate at a fraction of the electricity costs of conventional air conditioning equipment, releasing far less carbon dioxide and cutting costly peak electrical demand.

Water is already used as a refrigerant in evaporative coolers, a common and widely used energy-saving technology for arid regions. The technology cools incoming hot, dry air by evaporating water into it. The energy absorbed by the water as it evaporates, known as the latent heat of vaporization, cools the air while humidifying it. However, evaporative coolers only function when the air is dry, and they deliver humid air that can lower the comfort level for building occupants. And even many dry climates like Phoenix have a humid season when evaporative cooling won’t work as well, said NREL.

DEVAP extends the applicability of evaporative cooling by first using a liquid desiccant — a water-absorbing material — to dry the air. The dry air is then passed to an indirect evaporative cooling stage, in which the incoming air is in thermal contact with a moistened surface that evaporates the water into a separate air stream. As the evaporation cools the moistened surface, it draws heat from the incoming air without adding humidity to it. A number of cooling cycles have been developed that employ indirect evaporative cooling, but DEVAP is said to achieve a higher efficiency relative to its technological siblings.

NREL used building energy simulations to model DEVAP’s performance in two United States cities that represent the extreme cases for air conditioning: in Phoenix, which is extremely hot and dry, and in Houston, which is hot and extremely humid. Compared to the current state of the art, DEVAP achieved estimated energy savings of 25 percent in Houston and 81 percent in Phoenix. NREL said DEVAP’s excellent performance in both of these climates indicates that the technology would save energy and money anywhere in the U.S., as well as in most cooling locations throughout the world. DEVAP also exhibits superior humidity control, so it could help to avoid the clammy feeling that occurs in some air conditioned buildings, while also avoiding the need to overcool the building supply air in order to achieve good humidity control.

NREL created, validated, and perfected the DEVAP design with the help of AIL Research and Synapse Product Development, each of which built a prototype unit to NREL specifications, but using their own fabrication methods. Laboratory testing of these units allowed NREL to verify the accuracy of the computer models used for the DEVAP design and for the annual energy savings predictions. The testing also led NREL to conceptualize a more efficient second-generation design that will achieve a size, weight, and cost suitable for today’s market.

How DEVAP Will Serve the A/C Market

DEVAP is expected to initially serve the new and retrofit commercial air conditioning market, most likely as a rooftop unit. This will make it relatively easy to supply the unit with plumbed water for evaporative cooling and an outdoor air stream to help cool the dehumidification stage. As the technology becomes more refined over time, it is also likely to enter into the residential market. Although the additional requirements of the DEVAP system may make it difficult to install in existing homes, new homes can be designed to accommodate these extra requirements, keeping the cost of the system low.

Sidebar: The DEVAP in Operation 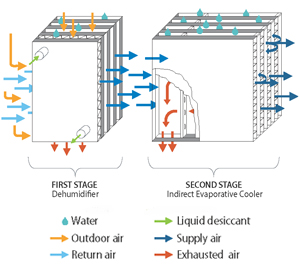 DEVAP consists of two distinct stages: a dehumidifier stage and an indirect evaporative cooling stage. Water is added to the tops of both stages, while liquid desiccant is pumped through the first stage. Some outdoor air is mixed with return air from the building to form the supply air stream, which flows from left to right through the two stages.

In the dehumidifier, a membrane contains the desiccant while humidity from the supply air passes through the membrane to the desiccant. The desiccant is also in thermal contact with a flocked, wetted surface that is cooled as outdoor air passes by it, causing the water to evaporate and indirectly cooling the desiccant. In the second stage, the supply air passes by a water-impermeable surface that is wetted and flocked on its opposite side, providing indirect evaporative cooling. A small fraction of the cool, dry supply air is then redirected through the second-stage evaporative passages to evaporate water from the flocked surface and is then exhausted.