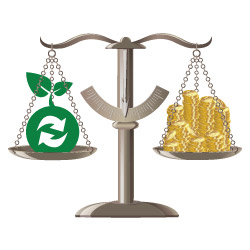 The Air-Conditioning, Heating, and Refrigeration Institute (AHRI) is in the midst of a Low Global Warming Potential Alternative Refrigerants Evaluation Program (Low-GWP AREP). The approved test reports are due at the end of the year or early 2013, but some preliminary results were presented during the 14th International Refrigeration and Air Conditioning Conference recently held at Purdue University in West Lafayette, Ind.

The cost-effectiveness of refrigerants were reviewed in a report titled “Lifecycle Climate Performance (LCCP) of Various Refrigerants and System Options” from Emerson Climate Technologies that was presented at the fall Food Marketing Institute and Store Development Conference in Phoenix.

The ongoing Low-GWP AREP is testing 38 potentially low GWP refrigerants that could be used as alternatives instead of higher GWP refrigerants. “These refrigerants represent what the industry currently feels have great potential to replace HCFC-22, R-134a, R-404a, and R-410A,” said AHRI’s Xudong Wang, who presented the paper at Purdue.

Noting the phaseout of R-22 by 2040 in developing countries and 2030 in developed countries, Wang said HFCs such as R-410A and R-134a “have come under close scrutiny due to global warming concerns.”

And the refrigerants stretch across the board from those with the A1 safety rating, the A2L slightly flammable rating, and A3 flammable.

As noted by Karim Amrane, AHRI vice president, regulatory and research, “This is a cooperative research program to identify suitable alternatives to high GWP refrigerants. This research is strongly desired by OEMs to access research needs, accelerate the industry’s response to environmental challenges, and avoid duplicate work.”

While the AHRI paper deals with such aspects, Wang noted, “The performance of air conditioning and refrigeration systems using these candidates needs to be evaluated to ensure acceptable system capacity and efficiency.”

According to Rajan Rajendran, vice president of engineering services and sustainability for Emerson Climate Technologies, the issue of efficiency was one reason that prompted the LCCP project.

But he noted during the presentation at the FMI conference, “A Life Cycle Climate Performance approach to system design and refrigerant choice adopts a holistic approach to refrigerant selection factoring in safety, environment, performance and total costs.”

One of the matrixes shown to an audience of supermarket engineers detailed “emerging lower GWP refrigerants for new and existing applications.” Many of those were the same ones in the AHRI study.

Rajendran encouraged the store engineers as well as contractors to “minimize LCCP with options available today to meet your needs.” He noted, “Many lower GWP synthetic candidates will soon become commercially available. These candidates target keeping performance the same and reducing GWP and LCCP.”

He added, “Natural refrigerants like NH3 (ammonia), CO2, and R-290 (propane) should be considered when they make sense.” He noted that “regulations, safety, economics and performance have to favor choice over all alternatives.”

• There are alternatives to R-404A including R-407A and R-407F “that give good performance overall with lower GWP and lower LCCP.”

• The traditional air conditioning refrigerant R-410A is a “good option in medium temperature (refrigeration) and acceptable in low temperature applications with system redesign.”

Even as the industry works on future refrigerants, Rajendran said that “many benefits can be achieved now with existing technologies.” He said these include “a focus on energy efficiency improvement, maintenance, and refrigerant containment.”