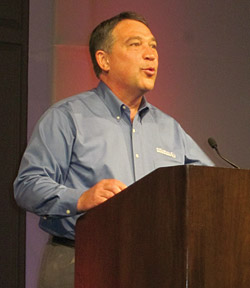 ORLANDO — A short look back and a long look forward was on the agenda at the WaterFurnace annual sales meeting in Orlando.

First up was the look back on a successful year for the company. WaterFurnace CEO Tom Huntington reported an impressive growing of the commercial side of the business. At the end of 2011, 43 percent of the products that ran down its lines were commercial products, which was an all-time high for the company.

“We embarked on a multiyear focus on commercial products. It’s a strategy that will be long term, but it got us through the short term as well,” Huntington said. “It’s all about new products and the expansion of the breadth of the products. We’re bringing the same offering to commercial that we’ve traditionally had in residential. That and the marriage of controls is the secret sauce for WaterFurnace. That expertise has been leveraged and really helped us through the rough patch in residential construction.”

Huntington also spoke positively about the U.S. economy in general. He shared with the group that WaterFurnace believes the economy is headed on an upward trend. And while there are still some headwinds out there, a lot of the indications are that things are moving in a positive direction.

“We expect this housing market to get off the bottom because it’s at the lowest level since the Great Depression. It’s hard to believe that single-family homes have been running at that level. But there’s a pent-up demand,” Huntington said.

While a lot of new products were rolled out, the biggest buzz at the meeting was reserved for the Symphony Home Energy Management System. The system displays to homeowners where energy is being used and assists them in making small lifestyle changes to reduce its usage. An intuitive online dashboard monitors energy consumption in real time and the Internet-enabled thermostat allows the customers to control home temperatures from any web-enabled smartphone or tablet.

“If a homeowner can visually see a particular device is using a certain amount of energy, they’re going to be more cognizant of that usage on a regular basis and they’ll want to control that device. It’s a constant reminder,” said Huntington. “People behave in a predictable fashion. If they know more about the energy usage in their home, they will respond to that. How many of us just look at the total of our monthly bill? What if the system told you that running your dishwasher at 6 p.m. at night cost you X, but if you set it for 10 p.m. it cost you Y? People start doing dishes at night.”

Other new products that were introduced included the following:

• The 5 Series, an upgrade to the Envision® product line that delivers whole-home comfort. The 5 Series 500A11 combines forced-air heating and air conditioning and generates a portion of a home’s hot water, all from a single unit. Available in nine single-speed and six dual-capacity sizes from 1 to 6 tons, the geothermal heat pump system uses R-410A refrigerant and features a variety of advanced technology and components. Copeland Scroll™ compressors are mounted on double isolation plates for quiet operation. Dual capacity units include Scroll UltraTech™ compressors for added efficiency and reliability. A variable-speed electronically commutated motor (ECM) further enhances system efficiency, running only at the speed required. Other choices include a standard permanent split capacitor (PSC) or high-efficiency X13 blower motor for comfort and quiet operation.

• The 7 Series geothermal heat pumps. The key differentiator to this product is the introduction of InfiniSpeed™ technology — a soft start variable-capacity compressor that provides the highest performance and quietest operation that WaterFurnace has ever offered, according to the company. The compressor isn’t limited to the “high” and “low” speeds of past systems, running at the exact speed needed for any situation. Nearly continuous operation makes the 7 Series even more efficient. It also provides consistent indoor temperatures and comfort levels throughout the home. The 7 Series includes the standard warranty and a 10-year parts and labor allowance

Director of marketing Tim Litton shared with the dealers some tips on how to market geothermal. While most marketers are interested in the 18-34 demographic, Litton was quick to say that isn’t the group to which WaterFurnace should be marketing.

“A 45-year-old values things differently than a 25-year-old,” Litton said. “That is why finding your demographic is crucial because we want to speak to people that are listening. We don’t want to waste money talking to someone who isn’t paying attention.”

The good news that Litton reported was that there are plenty of those people out there. A total of 50 percent of all consumer spending in the United States comes from people 50 years old and up. They earn a total of $2.4 trillion annually compared to the $1.3 trillion earned by people 18 to 34. They generate 41 percent of all disposable income. And despite all that, less than 10 percent of all marketing dollars are spent on them, and a lot think the advertising industry ignores them altogether.

Michael Albertson, senior vice president of sales and marketing, said to keep selling because the geothermal market will continue to grow.

“As the public remains considerate of the cost of running their homes and businesses, geothermal will just grow. As the years go by, we see the total numbers of geothermal in commercial, residential, and industrial growing every year.”