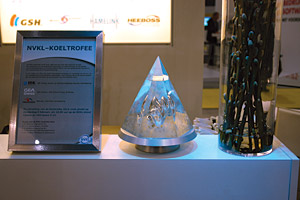 What do Dollar General, Dean Foods, Heineken, and Safeway have in common? After all, one is known for general merchandise, another for dairy products, another for beer, and another for retail sale of food.

The common link is that all of them utilize industrial refrigeration with some of the most state-of-the-art equipment in terms of storage facilities, chillers, dehumidification, and controls.

At the most recent International Institute of Ammonia Refrigeration Conference in Milwaukee, a number of the exhibitors were highlighting case histories reflective of some directions industrial refrigeration is heading.

Based on information and conversations at the booths, here are some of the findings.

Each site was in excess of 1 million square feet and each was provided a package chiller system capable of 1,100 tons of refrigeration (TR) of cooling. The systems were built at AIR’s fabrication facilities and shipped to project sites for assembly by AIR crews. The idea was to minimize on site construction and meet tight project schedules.

AIR also noted its involvement in providing a 750 TR packaged glycol chiller system to a Dean’s Food facility in Woodbury, Minn. Installed were industrial grade equipment and integrated PLC controls. The structure is fully enclosed and allows for service access.

Bry-Air, which deals with desiccant dehumidification, was summoned by Heineken to help the company deal with some issues related to condensation at one of the Dutch beer brewer’s locations.

According to Bry-Air, the total moisture load at a temperature of 35˚F was 224 pounds of water removal per hour. To remove that amount of moisture, Bry-Air supplied a Model MVB-200-FS with a nominal airflow of just over 20,000 cfm. According to Bry-Air, “The energy source for the reactivation was steam. An air-to-air heat recovery coil was included for additional energy savings.

“The dehumidifier was installed on the roof of the six-floor production building in sheet metal housing. From there the dry air was distributed to each of the six floors and the basement area. The return air from the production area was recirculated through the drier and dried on a continuous basis.”

Logix Controls has been working with the Safeway supermarket chain since 1993 in terms of refrigeration control systems. One of the most recent projects involved a Tracy, Calif., distribution center. This was an upgrade to an earlier generation Logix system with the company’s current generation controls and software that included specific energy management and efficiency features.

It was part of an overall upgrade that also included variable-speed fans and a new energy-efficient lighting system. The facility has 13 compressors totaling over 4,000 horsepower, eight condensers, and 125 evaporator units running a combined 830-fan horsepower.

“Logix gives you the ability to drill down to individual evaporators, compressors, and other equipment,” said Tim Kierst, maintenance manager at the Tracy distribution center. “You can zero in right on any problem and fix it, which helps up reduce our manual labor and maintenance time.”

It won the Dutch Refrigeration Prize in February 2012. The Dutch Association of Companies in the Field of Refrigeration Technology and Air Treatment recognize innovations in the area of refrigeration and HVAC.

According to a press release from GEA, “The Energy Enhancer raises the temperature of the heat exhausted from refrigeration compressors, originally emitted at approximately 35˚C (95˚F) to a level of around 80˚C (176˚F), which can be effectively used.

“This enables efficient use of the heat in, for example, milk treatment (for pasteurization), French fry production (for blanching), and meat processing (for machine cleaning). An additional application example is a leisure center in which an ice-skating rink must be cooled and a swimming pool must be heated.”

The release went on to say, “The Energy Enhancer raises exhausted heat — which is often dissipated into the environment without being used in conventional refrigeration units — to a higher temperature, where it becomes useful energy. This eliminates the need to produce heat by gas-fired hot-water heaters or steam generators. The principle can be applied both for new facilities as well as existing plants — and possesses great market relevance, as emphasized by the jury in its award statement. In addition, the jurors expressed praise that the Energy Enhancer, which uses the natural refrigerant ammonia, does not represent an ozone-depletion hazard.”