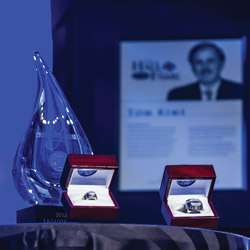 In 1968, Hentkowski was working at a small heating company in addition to working at Sears. A friend offered him the opportunity to start his own HVAC business and Hentkowski Inc. Heating, Cooling, and Electrical was born. The business grew quickly, and by 1978, Hentkowski moved his company into a larger building and expanded services to include HVAC installations for residential new construction and custom homes, as well as commercial buildings and complete building restorations. In 1986, Hentkowski Inc. Heating, Cooling, and Electrical became the first Carrier factory authorized dealer in Delaware, working closely with its distributor, Peirce-Phelps. It also became the second company in the nation to have all of its HVAC technicians North American Technician Excellence (NATE)-certified.

Hentkowski passed away in 2010, and his wife Micki has since taken over the HVAC business, along with their daughter Barbara, sons John Jr. and Steven, and several other family members. “Much of John’s success could be attributed to his genuine love for people and his sincere desire to ‘give back,’” said Micki Hentkowski. “That is what has made Hentkowski Inc. Heating, Cooling, and Electrical what it is today and we plan to continue John’s legacy.”

Kime earned an electrical engineering degree from Auburn University in 1969, and began his career as sales engineer for an air conditioning manufacturer. In 1977, he began work at Standard Heating Co., a business that initially began as a roofing company back in the 1930s, and expanded decades later to include heating and air conditioning installation and service. Standard Heating Co. then became Standard Heating & Air Conditioning Co. and Kime served as vice president from 1977-1996. He purchased the company from Bob Williams in 1996. Today, Standard Heating & Air Conditioning Co. is still locally owned and recognized as a leader in the Birmingham area, installing and servicing heating, cooling, plumbing, and generator systems. This 63-employee company recently expanded into home performance contracting as well, focusing on making their customers’ homes more comfortable and energy efficient.

Tom Kime’s son Tyler said it has been a pleasure working with his dad over the last six years because of his continual focus on customer satisfaction. “Tom’s integrity is unmatched and his focus on customer service has kept Standard Heating & Air Conditioning Co. among the elite in the Birmingham HVAC industry. He strives to be on the cutting edge of our industry and he wants to provide customers with the very best products and state-of-the-art technology.”

Maddux earned a civil engineering degree from Texas A&M in 1959, and began his career at Carrier in wholesale distribution. In 1983, Maddux and Brodie Riner purchased P&M Air Conditioning and Heating Co. When Riner retired in 1992, Maddux’s two sons and daughter purchased Riner’s share of the company. Together, the four grew the company to be recognized as one of the leading HVAC dealerships in Houston. Maddux retired in 2011, but the company remains family-owned. Today, P&M Air Conditioning and Heating Co. is managed by Maddux’s two sons, Mike and Steve, and his daughter, Rebecca. The company currently employs a team of 24 employees and manages a fleet of 12 trucks.

After 53 years of service, the Maddux family attributes much of their success to taking care of customers, employees, and the community. “We’ve always been focused on doing the right thing at P&M Air Conditioning and Heating,” said Mike Maddux. “Our father built his business on making sure customers are satisfied, and we will continue that commitment to Carrier and our customers.”

In addition to the Hall of Fame awards, Carrier also presented 127 active dealers with its President’s Award, an honor presented annually to Carrier dealers who exemplify the company’s model for operational excellence, business effectiveness, and delivering the best in cutting-edge technology to consumers. Winners go above and beyond the call of duty in the industry with a dependable, consumer-focused work ethic.

“The President’s Award is designed to encourage and recognize dealers who have continually focused on customer satisfaction,” Nelson said. “This year’s winners provided superior customer satisfaction while delivering exceptional customer value and successfully representing the Carrier brand in their communities.”