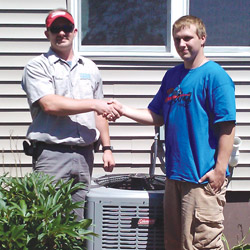 “We had heat waves all summer; it was 90 degrees every day,” he said. “I wanted to do something nice for my mother. She works really hard in the mill for me, so this was something I could do for her.”

The event lasted nearly 35 hours and required contestants to remain in a booth with their hands on an air conditioner. The objective was to see which contestant could touch the air conditioner for the longest period of time. The 15 participants were permitted a five-minute bathroom break every four hours.

“The contestants were allowed to have cell phones, listen to their iPods, eat, and drink, as long as one of their hands remained on the air conditioner,” said Hipke.