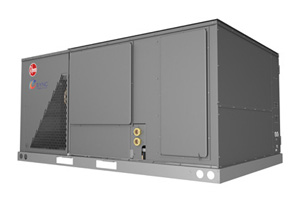 The Rheem unit works by using the heat removed from the restaurant by the HVAC system — which would normally be rejected into the atmosphere — as an efficient source for heating water. When a restaurant has a demand for air conditioning and hot water, this integrated solution switches over from a refrigerant-to-air system, to a refrigerant-to-water system. This is an energy efficient option because the heat of the refrigerant is transferred to the water instead of rejected outside as in a normal air conditioning cycle.