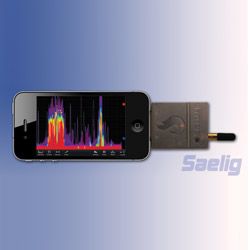 Designed for the iPad, iPod Touch, and iPhone, the WiPry-Combo dynamic power meter and spectrum analyzer accessory offers a modern touch interface; it turns an iOS device into an ultraportable spectrum analyzer and dynamic power meter. It brings RF power measurements to a graphical interface to show RF waveforms like an oscilloscope — instead of showing voltage, RF amplitude is displayed on an iOS portable device. Actual power output can be triggered, captured, and recorded for protocol verification or for troubleshooting wireless devices. Screenshot results can be instantly emailed via the iOS host phone. Setups can be customized and accessed quickly. Display configurations can be saved for on-the-go measurements. The WiPry-Combo — including a demo package that does not require the actual WiPry device — is available free at Apple’s™ AppStore, and is available in English, French, German, Italian, and Spanish. The pSoc-based WiPry-Combo is compatible with all generations of iPod touch, iPhone, and iPad devices running iOS version 3.1.3 or higher. Its external antenna is attached via an SMB connector, allowing alternate antenna or direct input options.