Fuel Cells Growing in Use in United States 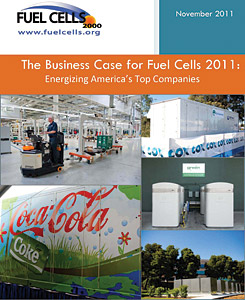 WASHINGTON — In a little more than a year, 34 major corporate customers have installed, deployed or purchased more than 250 fuel cell power systems and hundreds of backup power units, totaling more than 30 MW of power. “The Business Case for Fuel Cells 2011: Energizing America’s Top Companies,” a new report released by Fuel Cells 2000, a nonprofit education and outreach organization based in Washington, D.C., profiles this select group of companies. Twenty-four are new corporate fuel cell customers. Ten are companies that have installed or ordered additional systems for several North American locations since last year.

Companies leading the charge in fuel cell deployment include:

The report notes that a primary application for stationary fuel cells is to provide combined heat and power (CHP) to the stores and headquarters of these companies.

Fuel cells are gaining greater use in the retail and grocery markets, at corporate headquarters, office parks, and mixed-use residential buildings, states the report. Fuel cells are delivering efficient electrical power or combined heat and power to these sites, and they can continue to generate power during grid power failures to avoid downtime for critical business functions.

According to the Fuel Cells 2000 report, fuel cells are inherently efficient, with electrical efficiencies between 40 and 60 percent, depending on the type. When the waste heat is captured in a CHP configuration, overall energy efficiency can be 85 percent or higher. That waste heat can be used for space heating, hot water, or even air conditioning or refrigeration.

Most fuel cells in the field operate on natural gas or pure hydrogen, but some fuel cells also have the ability to run on propane or a renewable fuel source such as anaerobic digester gas or other biogas. This allows customers with organic remnants of daily processes, such as effluent from beer and winemaking, or animal waste from industrial farming, to eliminate the expense of removing the waste and instead use it to power their facilities. This not only reduces costs and emissions, but also adds to a company’s green image.

Fuel cells generate low to zero emissions, depending on the fuel source, and are exempt from air quality permitting in numerous states. Fuel cells are also quiet, so they can be installed indoors or outdoors without noise disruption.

Backup power is another growing market for fuel cells. AT&T, for example, has more than 260 ReliOn Inc. fuel cells installed at various sites across the United States and is installing at least 120 more.

In one of these applications, the report notes that, in 2010, Becker + Becker installed 400-kW UTC Power fuel cells at two mixed-use buildings, one located on Roosevelt Island, New York City, and the other in New Haven, Conn.

At the New Haven location, 65 percent of the electricity generated by the fuel cell is used to provide power to common and commercial areas. The remainder of the power (excess generation) goes back to the grid with reimbursement. One hundred percent of the fuel cell’s waste heat is used for domestic hot water and space heating for 500 apartments, as well as pool heating.

At the Roosevelt Island location, 100 percent of electricity generated by the fuel cell powers 500 apartments and common areas. Seventy percent of the fuel cell’s waste heat is used for domestic hot water and space heating.

According to Becker + Becker, annual energy cost savings at each site are in the range of $350,000. The fuel cell systems will also reduce carbon emissions by 790 metric tons per year per site.