When it comes to energy-efficient residential heating, heat pumps and condensing furnaces have grabbed most of the attention lately. But the benefits of hydronic radiant systems should not be overlooked.

Hydronic radiant systems are quiet, easy to zone, and don’t stir up dust, germs, or allergens. They can be paired with many types of heat sources, including gas and electric boilers, heat pumps, geothermal systems, and solar heating. Because radiant heat is stored in the structures being heated, it dissipates slowly, meaning it can keep homes comfortable during power failures.

And with the right controls, accessories, and installation methods, hydronic radiant can help achieve energy efficiency goals while providing warmth and comfort to a home’s occupants in cold climates.

‘“Hydronic systems tend to be more efficient and more cost-effective because of the mechanics involved in the system,” said Kolyn Marshall, systems engineering manager at Watts, which makes components for hydronic radiant systems, from boilers to tubing to controls, under several brand names.

While forced air is by far the most common type of heating system in the U.S., manufacturers say radiant hydronic is popular in new construction in certain regions, especially in some Northern states and in mountainous areas, such as around the Rockies and in the Pacific Northwest.

There is still a market in the U.S. for systems with traditional cast-iron radiators, especially in retrofits and restoration projects, and also for modern steel-panel radiators, said Mark Avron, national sales manager for specialty products at the Bradford White Corp., which makes boilers under the Bradford White and Laars brands.

But new residential hydronic radiant systems, as well as some retrofits, often use in-floor tubing through which heated water circulates. A hydronic system can be installed in concrete in a slab-on-grade construction, in a thin layer of concrete over a subfloor, underneath the subfloor between the joists in an existing home with a basement or crawl space, or within a subfloor. Occasionally, the tubing is built into walls or ceilings instead of, or in addition to, the floors.

Building characteristics such as the tightness of the building envelope, its insulation, its solar gain and heat loss, and the R-values of floor coverings will also affect the system’s performance.

“It’s extremely important to have the right design first before beginning a radiant installation,” said Justin Churchill, residential segment marketing manager at Uponor North America. The first step, he said, is a building heat-loss analysis to determine the total Btu needed per hour to properly heat the space.

In the radiant hydronic model, turning down the temperature of the circulating water translates into energy savings.

“The lower the water temperature required to heat the structure, the less fuel required,” said Avron. 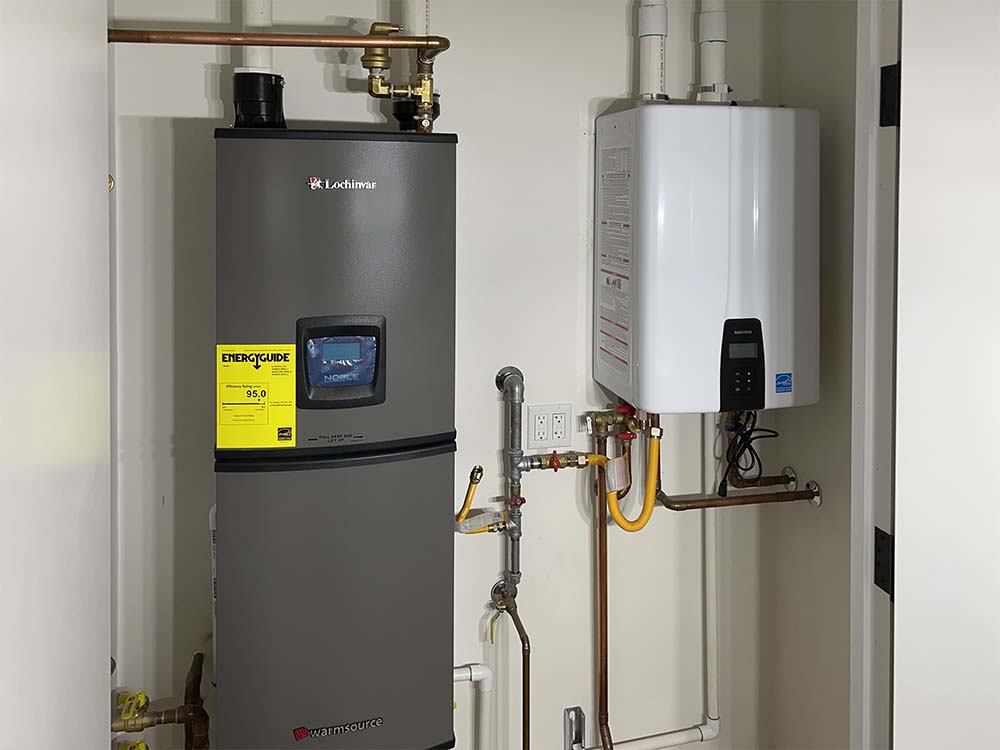 MECHANICAL ROOM: The heart of a Warmboard hydronic system for a house of about 2,000 square feet. On the right is the domestic hot water boiler and on the left is the Warmsource — the boiler and controls for a Warmboard Comfort System. (Courtesy of Warmboard)

Warmboard Inc., for example, offers floor panels embedded with aluminum sheets that promote heat transfer upward and through the floor covering. Their heat conductivity means the water temperature can be set lower than in a system without that feature, while keeping the same comfort level, said Ross McCord, the company’s brand manager.

A Warmboard system might run water at a temperature of 120°F at the high end, McCord said, while a system without similar heat-transfer panels might run 10-20° hotter.

Warmboard-S is a structural-grade panel of Douglas Fir that’s sturdy enough to double as a subfloor. Warmboard-R is a thinner OSB panel that can be installed over concrete or an existing subfloor. Both are cut with channels that guide and secure the water tubing in the recommended serpentine pattern. Warmboard R can also be used in walls and ceilings.

Uponor has similar products, the Quik Trak plywood sheets, also channeled for tubing installation and lined with aluminum for heat transfer, and Fast Trak mats with evenly spaced knobs that aid in tubing layout while allowing for more flexibility in tubing patterns. Fast Trak, recommended for retrofits, comes either unlined or in a thicker version with insulation.

Uponor also features Joist Trak extruded aluminum heat-transfer panels for use underneath the heating tubes when they’re attached under a subfloor when the installer has access to the joists in a retrofit.

“It dramatically increases the surface area that’s touching the tubing,” said Churchill. Without the aluminum spreading heat from the water tubing up and outward, he said, much of that heat would be lost in the joist bays in that type of tubing installation.

Choosing the right thermostat is important too. Because in-floor radiant warms the floor and the objects in the room, Churchill said, a thermostat that measures the zone’s operative temperature, not just the air temperature, is best for maximum efficiency.

Some systems feature smart thermostats that measure the temperature in each zone and constantly modulate the boiler’s operation accordingly. Some provide users with set-and-forget capabilities for temperature setbacks at night, for example, or at times when a particular zone is not occupied. 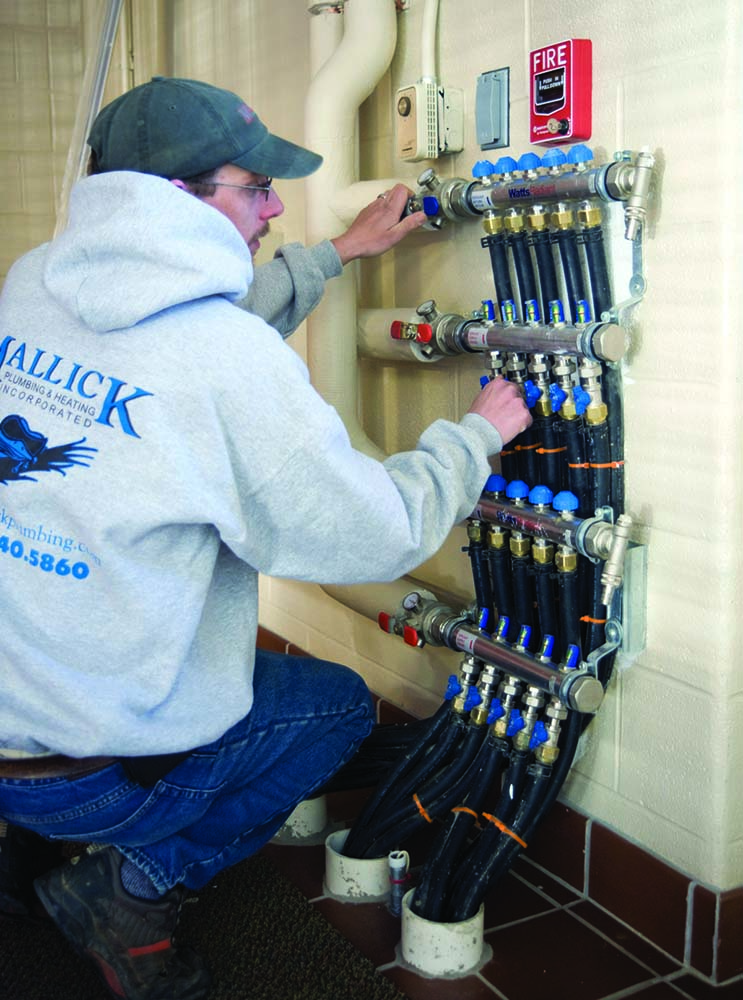 SYSTEM CHECK: A Watts manifolds and Watts Onix tubing, which is reinforced with fiber and includes an aluminum oxygen barrier, feed the radiant hydronic system in this building. (Courtesy of Watts)

“With zoning, you can set your master bedroom to be a bit warmer during the day and colder at night and you don’t have to think about it,” said McCord.

Watts takes the concept of smart thermostats further with its tekmar brand of controls. Marshall said a hydronic radiant system can be outfitted with a tekmar thermostat and controls that monitor the lag time between when a space reaches the desired temperature and when it starts to cool off, and then call for heat in a way that narrows that gap, meaning less heat will be required to bring the space back up to temperature.

"That will increase efficiency,” Marshall said. “You don't always have that heavy load to pick up every time” the temperature needs to be raised.

That type of system is continually learning and fine-tuning itself, Marshall said, to work that way under constantly changing conditions. “They spent decades perfecting those algorithms,” he said.