This website requires certain cookies to work and uses other cookies to help you have the best experience. By visiting this website, certain cookies have already been set, which you may delete and block. By closing this message or continuing to use our site, you agree to the use of cookies. Visit our updated privacy and cookie policy to learn more.
Home » Solutions Arise to Make Mini Splits Fit Into a Home’s Decor
NewsHVAC Residential MarketResidential Ductless

Consumers want the comfort but worry about the appearance

With traditional HVAC equipment, it’s mostly out of sight, out of mind. Consumers typically prioritize comfort and quiet operation. Mini splits present a different situation. These devices are displayed prominently on the wall.

That creates a new set of issues for consumers. The mini-split market remains poised to grow as the technology improves and people use their homes in a larger variety of ways than in the past. But the aesthetics of mini splits still hold back the market to some degree.

The reason for the pronounced appearance of many mini splits comes from a trade-off between form and function, said Curt Freedman, president of CMF Engineering Inc. Freedman has an older mini split in his office, and it’s very slim, making it less noticeable. It’s also much less efficient, he said, which is why it can take up less space.

A manufacturer’s representative told Freedman a few years ago that his company lost half their sales due to aesthetic concerns. The market has changed some since then, with people seeking specific comfort solutions in different parts of their home. The popularity of real estate shows helps, said Jamie Jensen, vice president of Air Control Home Services in Lake Havasu, Arizona. This is especially true of the shows set in countries where mini splits are already common.

“People are getting used to seeing them,” Jensen said.

Making the units more aesthetically pleasing will continue to drive the market. Manufacturers are working to make their offerings more visually appealing, and HVAC contractors also have some interesting options of their own. Freedman offers an aftermarket solution for that. 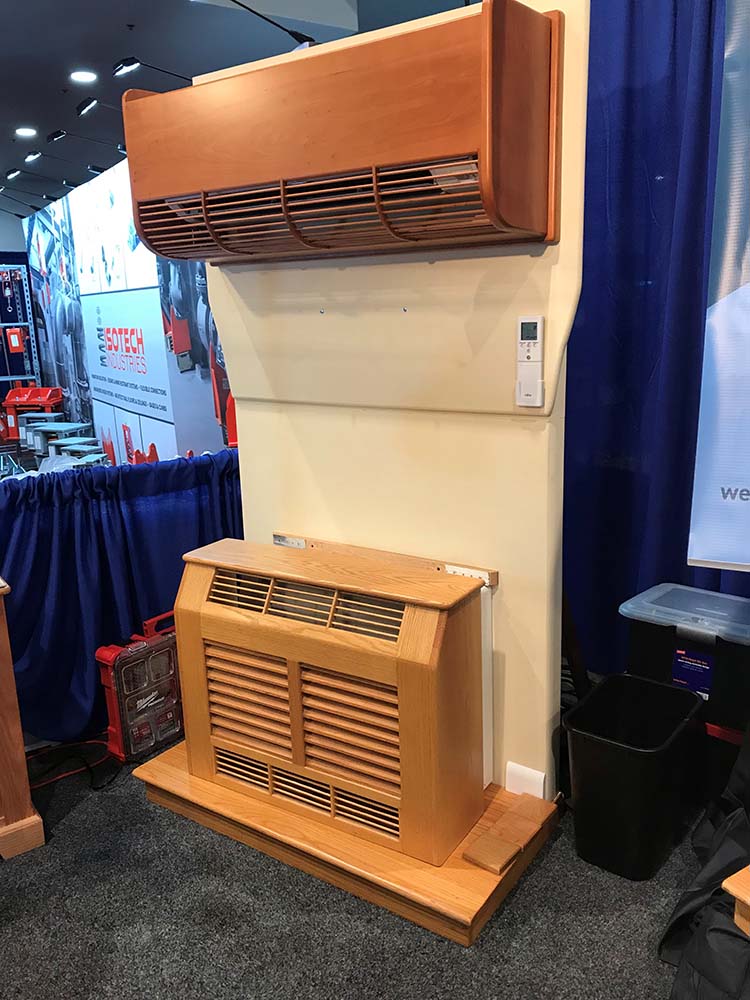 Freedman produces a line of wooden covers for mini splits and other exposed HVAC devices. He created the first such cover 20 years ago, when working as a design-build HVAC contractor. A client operating a medical building wanted to conceal the HVAC equipment but had some requirements for doing so. The process had to finish all at once and avoid creating any dust, dirt, or fumes.

Freedman created a soffit out of red oak that he cut and finished offsite. He then brought it into the office and attached it to the wall. For the next few years, he kept working on other such covers, using them to outfit his own home.

Now he offers a line of wood coverings. Freedman was awarded several U.S. patents for them three years ago — Nos. 10,295,198, 10,641,519, and 814,624. Freedman grew up in a woodworking family. His father had a workshop in their garage. His uncle down the street had an even bigger one. Freedman excelled at woodshop in high school.

Today he works with kitchen fabricators to manufacture his covers. Freedman builds the prototypes at his shop in Massachusetts and then sends them to Connecticut for completion. Each manufacturer has its own dimensions and BTUs to take into account.

“It takes a lot of work to make sure our patterns are accurate and correct,” Freedman said.

The final product is a hinged unit that opens either left or right for access when the mini splits need service. Freedman is currently developing a unit that will open up like the rear door of a hatchback. Each unit weighs about 14 pounds.

Most HVAC technicians should be able to install the cover at the homeowner’s request, Freedman said. A mounting bar goes in just above the mini split. It is mounted into the studs with two or three 2½-inch coarse thread screws. The cover then mounts on the bar like a French cleat.

The covers come in the natural colors of the wood; Freedman said some customers ask for staining, but he talks them out of it. The most popular woods are cherry, red oak, and maple. White oak and walnut are also available, and Freedman said he’s had some requests for redwood. Most of the sales have been in the Northeast, where wooden floors and natural furniture are common.

On the other side of the county, Jensen provides customers with a creative enhancement to ductless installations. Lake Havasu regularly records some of the hottest temperatures in the United States. It’s also a recreational community, so garages to store vehicles and other items are important. Air Controls is a Trane/METUS ductless dealer. Jensen has gone so far as to wrap cassettes for clients so they match the color or theme of the garage.

“We know it’s going to be in somebody’s house. It should look nice.”
Ken Kastl
Senior regional sales manager , LG

Manufacturers are investing in improving the appearance of their mini splits as well. For example, Ken Kastl, senior regional sales manager for LG, said his company employs industrial engineers to ensure their mini splits look as good as they perform.

“We know it’s going to be in somebody’s house,” Kastl said. “It should look nice.”

LG’s Art Cool line offers a variety of looks, including a mirrored unit that Kastl said takes on the color and vision of a room by reflecting what the space has to offer. Then there is the Art Cool Gallery, which allows homeowners and building operators to inset their own artwork in a frame to cover up the mini split. That makes it useful for older homes without much wall space to sacrifice for a mini split. Some municipal buildings use these units to display documents such as the town charter.

“For a guest who walks into that building, they would never guess that it’s heating and cooling that space,” Kastl said.

A few people in the industry see mini splits moving in the same direction as another appliance — the refrigerator. The only concern over refrigerators once was that they functioned. Appearance was secondary to keeping food from spoiling. Today, refrigerators are advertised as part of a kitchen’s décor. In some cases, they become invisible, blending in with the cabinetry. Mini splits seem headed into that same direction.