Next generation of compressors looks smaller, quieter, and not necessarily in cooling

The vapor compression cycle is “where the magic happens” in a cooling or refrigeration system. Refrigerants of choice have changed over the years, but the compressor itself has been helping to pull that heat transfer rabbit out of the hat ever since American inventor Jacob Perkins received the first patent for his system in 1834.

Around 20 years later, Australian newspaper printer James Harrison observed that his metal type equipment was always cold upon cleaning them with ether. A bright idea ensued.

By 1855, Harrison had a patent for his closed ether refrigeration system. Few people in or out of the HVAC industry would be surprised to learn where Harrison’s earliest commercial customers wanted to apply the benefits of his idea: meat and beer.

“We deal with dimensions on a scale of microns. Each gain we have in terms of more precisely controlled dimensions is relevant to achieving better efficiency, or less vibration, or lower noise, and so on.”
– Claudio de Pellegrini
Research and development director Nidec

Fast forward to the modern residential and commercial era of cooling and refrigeration. Applications have grown exponentially all over the world. Have 166 years of small improvements and occasional leaps in chemistry taken us to the limit of what compressors can do?

Not quite yet, said Eddie Rodriguez, strategic marketing director at Danfoss Turbocor Compressors. For one thing, they can create comfort in the other direction, too.

Rodriguez explained that the newest oil-free compressor designs can operate with pressure ratios as high as 6.3 to support air-to-water heat pump operation requiring hot water in cold weather climates. He expects there is more room to enhance capacity and operating range for those applications as well.

“Looking from the inside out, I can say that the first three [areas for improvement] on the list are: thermodynamics (heat transfer insulation and piston-cylinder leakage reduction), mechanism (strict control on dimension variations), and manufacturing process.”

That process matters in its own way.

“We deal with dimensions on a scale of microns,” he explained. “Each gain we have in terms of more precisely controlled dimensions is relevant to achieving better efficiency, or less vibration, or lower noise, and so on.”

These days, another way to get better is to get smaller — but there are pros and cons, de Pellegrini noted.

“Small compressors can even be enablers of dual compressors in the refrigeration systems: one for each compartment. That allows a significant energy saving,” he said.

High-speed motors allow for designing smaller and smaller compressors, di Pellegrini said, and the catch is that they can come with their own challenges in noise and reliability.

In that way, progress in motor technology can extend compressor potential, too.

For refrigeration equipment of all sizes, de Pellegrini points out that noise is more than a performance characteristic.

“It also creates the perception of quality in the final product. In this sense, there can be a tradeoff between low noise and high efficiency for the same cost.”

So that blend of performance and perception drives Nidec and others to look for ways to reduce decibels, either through design or production. 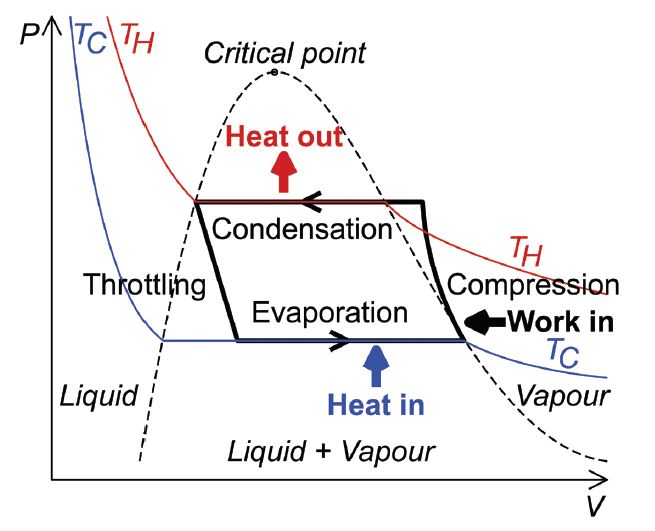 BEHIND THE CURTAIN: The compressor may be “where the magic happens” within a cooling system, but a peek behind a pressure-volume diagram for a fictitious typical refrigeration cycle reveals nothing but physics, chemistry, and ingenuity. (Courtesy of CMGLEE (CC By-SA 3.0))

The Future Is Variable

Fixed-speed was fine for a long time, but commenters for this article agree it isn’t the future — or at least it’s not where progress awaits.

“Transitioning from a fixed-speed compression strategy to a variable-speed approach offers the greatest opportunity for energy efficiency improvements in a variety of commercial refrigeration applications,” said Julie Havenar. She is Emerson’s director of integrated marketing, cold chain.

“These fractional horsepower compressors can be modulated from 1/8 to 7/8 HP,” Havenar said.

Martin Leslie is Havenar’s colleague at Emerson, serving as vice president of residential marketing, air conditioning. Leslie says that one concept traditionally rebuffed by business can actually have an upside.

“We are continuously evaluating technical advancements that can be implemented in future design iterations. Regulatory changes drive new system design windows, which are a great time to take advantage of those advancements.”

Leslie gave as examples the Copeland ZPK7 and ZPKZ scroll compressors for air conditioning. They embody the manufacturer’s latest design advancements in both motors and scroll optimization as a means to achieve efficiencies meeting the upcoming 2023 DOE regulations.

If Money Were No Object

Ask industry professionals what the ideal compressor would look like within the bounds of today’s (or tomorrow’s) technology if money were no object, and most will prefer not to speculate. However, Nidec’s de Pellegrini can imagine an answer, revisiting the realities of noise and performance.

“The use of higher-cost materials could allow the noise reduction without impacting efficiency,” he said.

Increasing the thickness of the compressor shell would help, de Pellegrini explained, and if cost were no concern, using other materials could make that possible.

He mentioned that over the last few years, Nidec has “studied some metallic porous materials, active vibration and noise controls and dynamics absorbers” as candidates for reducing noise.

In de Pellegrini’s opinion, it’s safe to say that “in general, the ideal compressor would be very similar to the technology we have today, but with some more costly materials for even higher thermodynamic performance.”

Of course, materials expense is a very real factor in manufacturing, but vapor compression technology itself is proof that thinking bigger can plant the seeds of success. Inventor Oliver Evans actually conceived and outlined the idea of vapor compression refrigeration in 1805, but it would remain only conceptual until the idea was picked up and carried into reality by Perkins’ patent and then Harrison’s ice machine.

The rest is history, but the next generation of compressors likely has another couple of tricks up its sleeve in the form of even lower profiles and more adaptability.