Amazon recently introduced the world to Ernie and Bert, its latest generation of warehouse robots. The giant retailer has long been a leader in warehouse automation, but these days anyone who moves inventory is taking a long look at what functions machines can perform. And that includes HVAC distributors.

Several factors are driving the move to automation. One is the challenge in staffing warehouses. At the same time, e-commerce places new customer demands on warehouse operators. Third, the competition for space drives up operating costs. Automation can solve many of these challenges if applied properly. As other industries such as auto manufacturers have learned, automation is only as good as its implementation.

“If you automate a bad process, it’s only going to get worse,” said Kristi Montgomery, vice president of innovation, research development at Kenco Logistics Services LLC.

Kenco provides logistic solutions to a variety of clients. The company recently helped an HVAC warehouse set up an AutoStore system that will be fully operational in a few months. This arranges bins in a cube and then uses robots that ride over the cube to collect the bins and deliver them to humans at work stations. This frees people from having to walk through the warehouse gathering parts, increasing productivity and safety, Montgomery said.

Ferguson uses an AutoStore system at its Denver distribution center with 35 robots working along a grid. Chris Everett, Ferguson’s director of supply chain, said the distributor used little automation in the past. A shift in logistics planning lead to the change. Everett said Ferguson operated lots of smaller facilities in smaller cities. It’s been moving toward centralizing distribution with bigger facilities in in bigger cities. That means higher costs, especially in the current environment with fierce competition for warehouse space.

“Everybody on the retail side is sucking it up as soon as it becomes available,” Everett said.

The Denver facility takes up 450,000 square feet, so there is plenty of room for growth. But Ferguson would have needed much more space without automation. The warehouse uses 40% less equipment and employs 30% fewer people.

Ferguson’s first attempt at automation came up short of expectations. The company that helped with the process oversold the capability of the robots it installed. Everett said they worked fine moving in a straight line, but were promoted as self-driving vehicles. While that was frustrating, Everett takes a positive view of the experience.

“It was time well spent because we learned a lot,” he said.

Montgomery said its seems like new robotics firms pop up every day, so distributors do need to make sure they choose the right products for their needs. The robotics firms want to avoid any mismatch as well, because it hurts their reputations. So distributors need to fully understand what they want and share that information with the providers.

Central to success is making sure the workforce in onboard, Montgomery said. The process comes down to change management. Many people worry robots will take their jobs.

“The reality is that we often have a difficult time finding enough workers,” Montgomery said.

Automation allows worker who want to be there do their jobs better and more safely, she said. Full automation is a long way off. The automated systems essentially focus on one task. They make that task easier, but are limited. 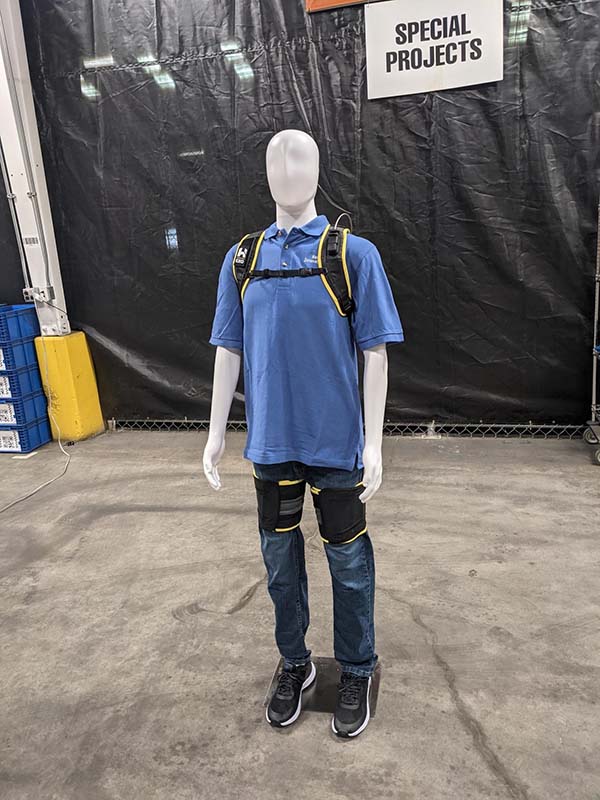 WORKING TOGETHER: One automation concept involves having workers wear a piece of equipment to improve their ability to lift objects. People and machines work together to improve efficiency at warehouses. (Photo Courtesy of Kenco)

In some cases the solution is allowing humans to utilize machines directly. Wearable technology allows people to move better, reducing the risk of injury and improving efficiency, Montgomery said.

Still, AutoStore can handle a bulk of the inventory and do it in a lot less space. Montgomery said her client flows 85,000 SKUs in a 13,000-square-foot area. The vertical nature of the AutoStore system also helps with inventory management. Returned bins stay on top, meaning slower moving parts move to the bottom.

Everett said Ferguson is implementing the AutoStore system in its new Phoenix warehouse with a few improvements. He said older facilities that lack automation are having a hard time keeping up with the pace of parcel orders. And that’s the way the world is moving, a process accelerated by the pandemic.

Lisa Anderson, president of LMA Consulting Group Inc., said distributors need to make some investment in warehouse automation. It doesn’t have to be as extensive as an AutoStore system, Anderson said, but they need to find something that will reduce costs and make them more responsive to customers. If they don’t, Anderson said, their competition will. And if it’s not the direct competition, it’s a competitor who can move into an area quickly. Those competitors will then be more profitable and have an easier time scaling up operations to meet demand.

“Between those two things, you will be left behind,” Anderson said. “It will be very hard to catch up.”

The upfront costs can be high. Montgomery said distributors need to look at the long-term return on investment. Anderson said distributors also should look at outsourcing some capabilities to third parties to scale more quickly without spending as much.

The move to automation is happening at a breakneck speed, Anderson said. Every firm in every field is dealing with the implications of the shift to e-commerce and they are competing for the same workers and the same work space. It’s not a question of whether distributors will bring automation into their warehouses, but how.

“You’ve got to be faster than you’ve ever been,” Everett said.