Hesitant employees want information about the air they breathe

More and more large employers are telling their employees they want them back in the office at least a few days a week. Employees, however, continue to resist returning, citing concerns about their well-being as one reason. Building operators also want people back, as their businesses depend on occupancy, and they’re investing in IAQ upgrades to help ease those concerns.

Coretrust Capital Partners LLC is a real estate investment firm focused on the acquisition and operation of large office properties. The firm acquires older buildings and then invests in upgrades, including to the HVAC systems. This put Coretrust in a good position when the pandemic broke out, but management quickly realized they would have to invest even more in IAQ improvements to keep and attract tenants.

“We’re using what I would consider to be an arsenal of weapons to alleviate our tenants’ concerns about returning to the workplace,” said Thomas Ricci, Coretrust’s managing principal.

Improving filtration was the most common IAQ upgrade conducted by building operators, according to a survey by Omni CleanAir. Coretrust replaced its already fairly high MERV filters with even higher-rated filters. The company went as high as possible with the physical limitations of the filter banks’ size. 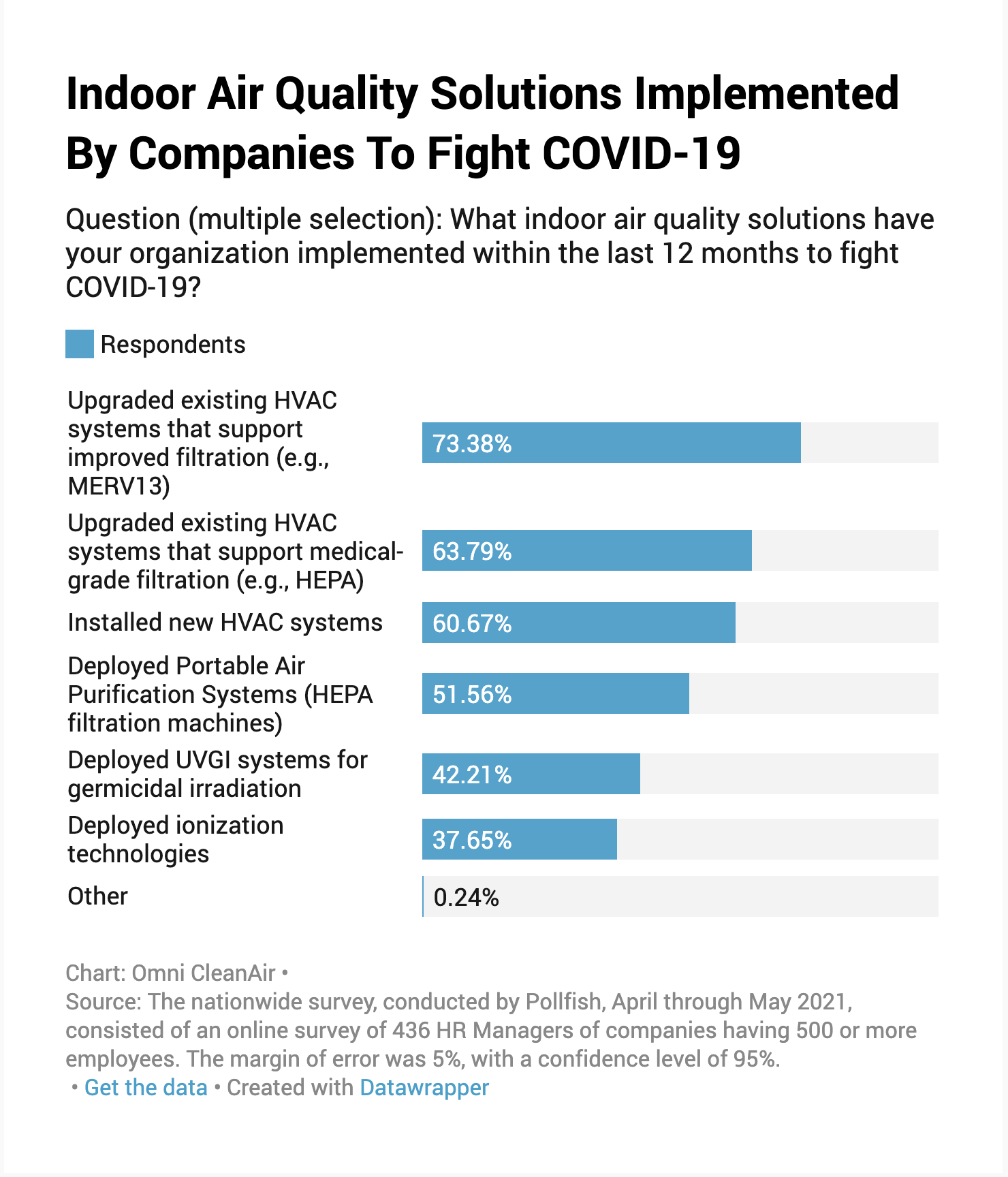 Coretrust also maximized outdoor air in all its buildings. The firm took this to a higher level at its office tower in downtown Los Angeles. Coretrust hacked into the building’s curtain wall to create a 1,000-square-foot loggia terrace that brings fresh air and sunlight into the 22,500-square-foot Workplace Innovation Lab on the sixth floor.

UV lights play a large part in Coretrust’s efforts to create a healthier workplace. The firm installed UV lights throughout the ductwork in its buildings to help kill viruses and other contaminants. Then one of its tenants approached management with an even more cutting-edge solution. 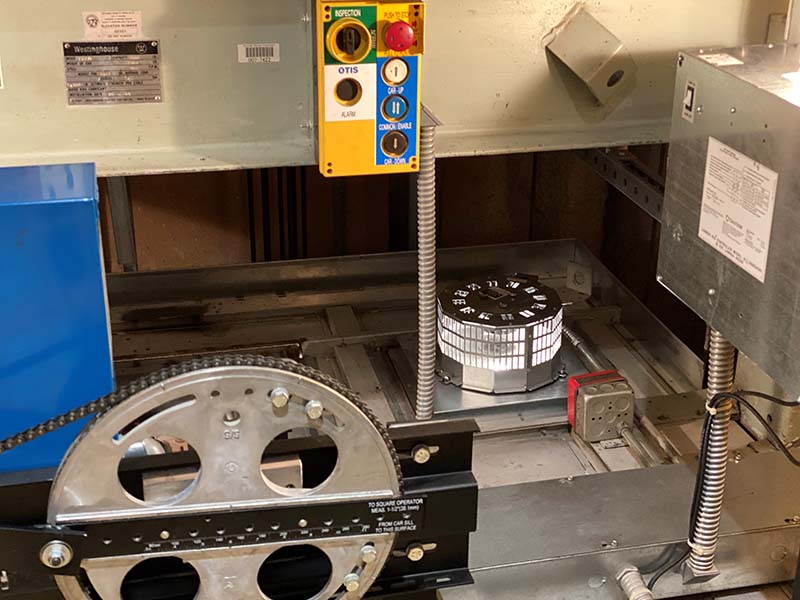 NOW YOU SEE IT: The bipolar ionizer atop an elevator cab at a Coretrust building. The firm shows off these units to potential tenants. Most IAQ is hidden from sight.

UBTech Solutions is a robotics firm with its headquarters in a Pasadena, California, office building owned by Coretrust. UBTech manufactures the Adibot UV-C Disinifection system, which uses robots to clean unoccupied rooms using ultraviolet light. Ricci said this process adds an extra layer of protection to the facilities while also demonstrating the steps Coretrust takes to ensure the health of building occupants.

Making IAQ upgrades visible can prove challenging. Elevators provide a good example. Coretrust management worked with its elevator service providers in all its buildings to install bipolar ionization in all 80 cabs. The units are on top of the cabs, and so are unseen by riders. Coretrust staff stops the cabs between floors to show potential tenants what has been installed and to explain how it works.

The company has seen the value in all the expense and effort at communication, Ricci said. Coretrust recently signed global engineering firm Syska Hennesy as tenants in its Los Angeles office complex. Ricci said the IAQ improvements helped land that deal. Other tenants have opted to stay in Coretrust properties rather than leave for buildings with lower rents.

“We’re just now starting to see the tangible benefits of what we’ve done and how it’s translating into a return to investment,” Ricci said.

Ricci sees growing awareness of these kind of certifications. He saw one recently being promoted at an airport. Consumers may not know exactly what they mean, but they are starting to understand their significance, Ricci said.

Certifications help boost confidence in a building, but people today are increasingly interested in real-time information. According to a recent survey by Carbon Lighthouse, 82% of millennials would feel safer returning to work with real-time access to IAQ information. Brenden Millstein, president of Carbon Millstein, said while some people dismiss the concerns of this age cohort, they are quickly becoming a large majority of workers.

“There’s still a concept that millennials are 22-year-olds, when in fact they are middle management,” Millstein said.

This group cares about IAQ. They also grew up in a digital world and expect instant access to information. The app from Carbon Lighthouse, Varify, uses data from the company’s own IAQ sensors along with existing building sensors to deliver IAQ updates to building occupants. The company’s survey shows 88% of millennials said they would use such an app in the office. Already, 65% of respondents used an app to measure IAQ at home.

It All has a Cost

This group understands the IAQ investments building operators are making, Millstein said. They just want to see the results. This could help the building owners avoid having to overinvest in IAQ in an attempt to make people feel more comfortable.

According to the Omni CleanAir survey, more than half of respondents invested over half a million dollars. Now they face an ongoing issue with higher energy bills as they bring in more outside air and increase turnover, said Paul de la Port, president of Omni CleanAir. Going forward, building operators need more focus on how they deploy IAQ. 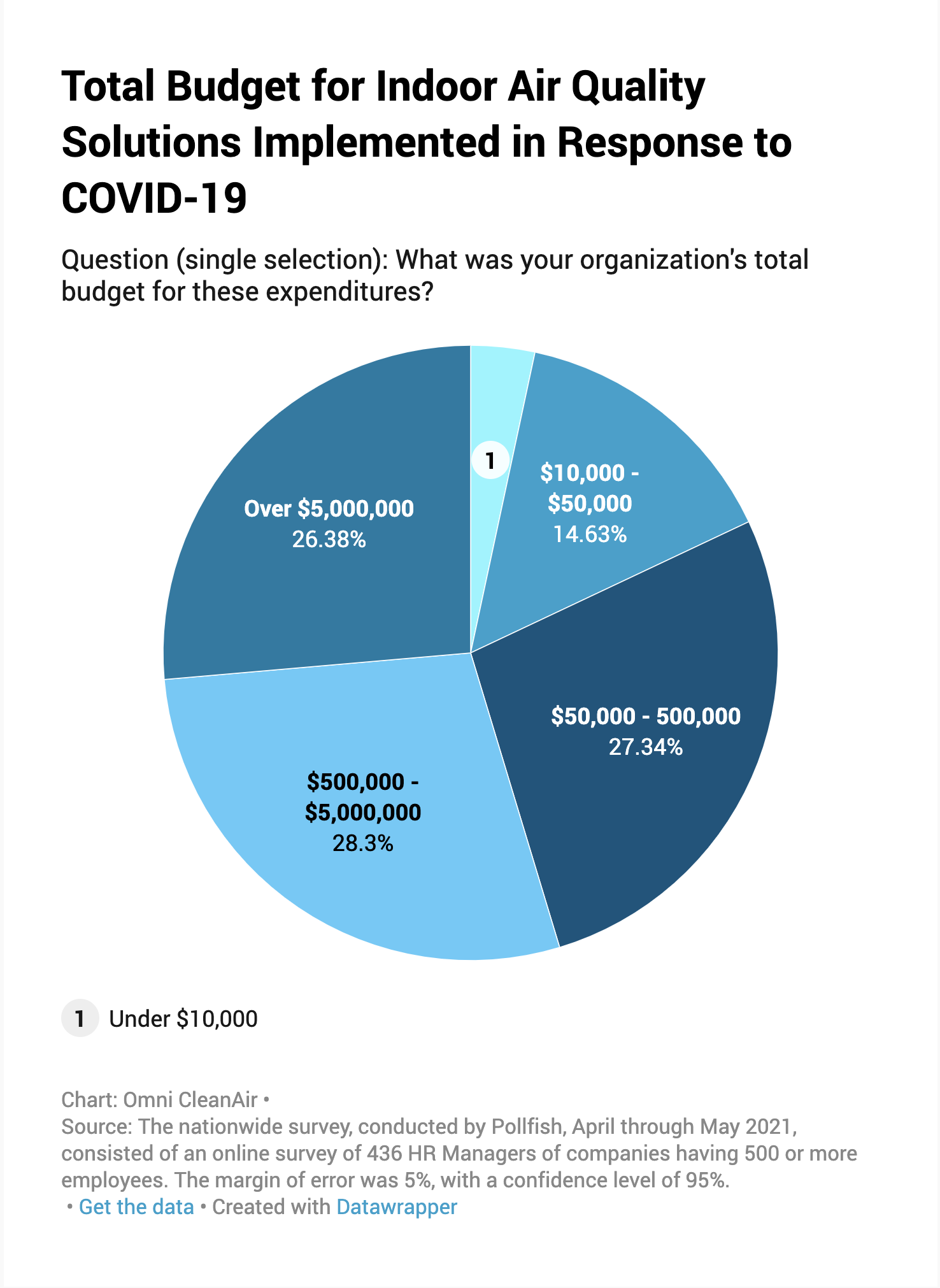 Building operators expect to continue to invest in IAQ even though the pandemic is ending. The past year has made everyone more aware of the airborne threats they face every day, Ricci said, such as the annual flu season. Concern about the climate also motivates concern about IAQ, Millstein said. Interest in IAQ is especially high on the West Coast, where residents face an increasing threat from wildfires.

De la Port compares it to early 20th century health movements, such as clean water and safer food. There may even be some government regulation to set IAQ standards. OHSA already came out with guidance in this area last year.

“The silver lining of this pandemic is it’s raised everyone’s awareness of just how dangerous it can be if you ignore it,” de la Port said.