Always check with manufacturer before retrofitting any cooling equipment

While it became illegal to produce or import virgin R-22 into the U.S. as of Jan. 1, 2020, it didn’t mean that the refrigerant suddenly became unavailable to service existing equipment. In fact, according to most refrigerant manufacturers, there is plenty of virgin and reclaimed R-22 currently available, and there will continue to be so for the foreseeable future.

If or when it becomes difficult to find R-22, or if customers are seeking a more environmentally friendly alternative to HCFCs, there are many options available. However, not all alternatives are compatible with every type of cooling equipment, so it is always a good idea to check with the OEM before performing any type of refrigerant retrofit.

For more than 15 years, Arkema has offered its proprietary blend, Forane® 427A (R-427A) – The Easy Retrofit™, as an alternative to R-22 in air conditioning or refrigeration applications. The main advantage of R-427A is that in most systems, it can be used with the existing mineral oil or POE oil, whereas other refrigerants must be used with POE oil, said John Maiorana, product support manager of Forane refrigerants at Arkema Inc. (North America).

“Forane 427A is one of the most popular R-22 retrofits,” he said. “It has a GWP of 2024 and offers an approximately 3 percent capacity loss compared to R-22. It has the closest performance to R-22 in terms of capacity and efficiency when compared to other retrofits in the market. Of course, how the system is currently running on R-22 will always affect final performance.” 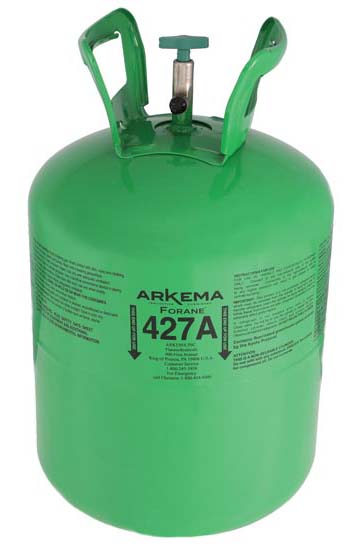 PROPRIETARY BLEND: For more than 15 years, Arkema has offered its proprietary blend, Forane 427A – The Easy Retrofit, as an alternative to R-22 in air conditioning or refrigeration applications.

R-427A can be used in both refrigeration and air conditioning applications, and while it will work in low-temperature applications, alternatives like R-407A will generally work better, said Maiorana. The trade-off is that the oil will need to be changed.

“The warranties on many R-22 systems have expired, and most replacement R-22 compressors are now coming charged with POE oil,” he said. “Therefore, compressor manufacturers have adopted R-407C with POE as a recommended refrigerant. Forane 427A and R-407C are very close in composition, with R-427A having the addition of R-143a for enhanced oil compatibility. Therefore, Forane 427A offers the flexibility to work in compressors containing POE or mineral oil.”

With any alternative refrigerant, it is important to understand that it should not be used to “top off” a system that uses R-22 (or any other refrigerant). Technicians should always first recover (and reclaim) the R-22 before introducing any new alternative to the system. As Maiorana noted, there are inherent risks when mixing refrigerants, because their pressures and temperatures are different; in addition, the alternative will contaminate the existing R-22, making it more difficult to reclaim.

To make sure the retrofit goes smoothly, Maiorana recommends the following steps when changing an R-22 system to R-427A:

Before offering a refrigerant retrofit, a technician should always take into account the current performance of the unit, its age, and the end user’s best interest, said Maiorana. Price and availability of R-22 are also important factors.

“There is no need for a one-size-fits-all approach,” he said. “In some cases, just topping off a current R-22 unit with additional R-22 is the right choice. However, if the unit is still functioning well and has service life left, technicians might consider that a refrigerant retrofit is the less costly choice for the end user.”

Ken Ponder, owner of Choice Refrigerants, invented R-421A and R-421B in 1995, once it became apparent that CFCs and HCFCs would be phased out. He said these replacement refrigerants can be used in most types of equipment with very little — if any — difference in capacity or efficiency when compared to R-22.

“The age of the equipment is also not a factor, since these alternatives were designed to run in older equipment,” he said. “In fact, alternatives were designed to help extend the life of a unit, especially if the original refrigerant was phased out and the cost has gone up. Unfortunately, too many technicians use the excuse of a leak or the age of the equipment to simply recommend that the customer buy a new unit.”

If the decision is made to retrofit an R-22 system with R-421A or B, Ponder said these steps should be followed:

“In choosing an alternative refrigerant for the masses, it’s hard to beat our R-421A,” said Ponder. “It has the closest pressure temperature product compared to R-22, and it’s also the only two-component blend in the market, which helps in the glide being the best over the operating range. R-421A is also the only legal refrigerant that comes packaged with a performance-enhancing lubricant, which helps every system. That’s why we call it the ‘Easy Choice.’”

ComStar International Inc. has two R-22 alternative refrigerants available. The first, RS-44b (R-453A) is the replacement that can be used for all R-22 non-flooded, high-, medium-, and low-temperature systems down to minus 20°F evaporating temperature. Unlike other R-22 replacements, the addition of POE oil to the system is not required with R-453A, said Steven Mella, CEO of ComStar International Inc.

Some of the advantages of using R-453A as an alternative to R-22, he said, include the following:

“If working on a residential air conditioning system, all technicians need to do is evacuate the R-22, change the filter (if system has one), and put in the R-453A,” said Mella. “With R-453A, it is not necessary to add any POE oil to the system, as the refrigerant incorporates a very small amount of hydrocarbons, which enhance oil return to the compressor.”

For R-434A, the conversion may be as simple as removing the R-22 and adding the new refrigerant, depending on the design of the flooded system, said Mella.

“If the system has oil return issues, then it is recommended to change out the oil to ComStar POE-HMC oil, which was specifically formulated to work with RS-45 in flooded systems with oil return issues,” he said. “Like all HFC blends, when charging either R-453A or R-434A, the refrigerant needs to be in the liquid phase, so the cylinder needs to be turned upside down.”

Surprisingly enough, Mella said that he often receives phone calls from homeowners who say their HVAC contractor has told them that R-22 is no longer available and that they need to buy a whole new system.

“We realize that situation happens, but there are many HVAC contractors who offer an R-22 alternative to their customers if the system is still serviceable and has life left in it,” he said. “Also, believe it or not, we meet service people at shows or counter days who don’t even know that R-22 alternatives exist.”

Given the various types of alternative refrigerants available, contractors and technicians should take the time to learn about each one, so they will be able to offer their customers the best solution for their particular equipment.