This website requires certain cookies to work and uses other cookies to help you have the best experience. By visiting this website, certain cookies have already been set, which you may delete and block. By closing this message or continuing to use our site, you agree to the use of cookies. Visit our updated privacy and cookie policy to learn more.
Home » Cool and Calculated: Checkups for Chillers Lead to Longer Lifespans
NewsService & MaintenanceHVAC Commercial MarketChillers & Towers

Cool and Calculated: Checkups for Chillers Lead to Longer Lifespans

Sooner or later, even the best chiller reaches the end of the line. Owners ultimately decide on — and pay for — replacements. However, contractors and service technicians can often spot the signs that the time for a decision may be on the horizon.

Regular maintenance and other tools can exert a major influence on whether a replacement happens closer to “sooner” or “later.” It can also make the difference between planned and unplanned, and for a variety of reasons, both owner and contractor can have their own reasons for preferring the former over the latter.

Swanson and Newell noted that air-cooled chillers should entail a few extra steps, like verifying that condensing coils/fins are in good, clean condition.

Howard McKew, P.E., CPE is the president of Building SmartSoftware and an ASHRAE Fellow. He has spent a lot of time talking about the what and why of checklists, having worked in most every angle of nonresidential HVAC design, construction, and maintenance over his career. As it turns out, once-common attitudes surrounding good procedures motivated McKew to build his large library of checklist-oriented maintenance columns for engineered systems and the industry in general.

“HVAC contractors are not good at sharing their chiller maintenance checklists,” he said. “When I was at BALCO, a past HVAC service and design-build contractor was very guarded with what his department did, even with us in engineering, estimation, and construction.”

Because many service companies may be reluctant to discuss that info — “even with the owner who contracted them,” McKew noted — the checklist itself may or may not be used to influence an owner about when replacement is needed. However, an organized plan of attack for maintenance will at least generate the info that can often aid an owner in making that call.

“In many instances, the decision is made after a major failure, and it is apparent that the cost of continued ownership is close to the cost of replacement,” said Bob Roth, Trane commercial product support manager.

“A second factor is the realization that if a failure were to occur on major components, such as the compressor motor or impellers, these and other parts may be no longer available.”

Yet other repairs may come with a parts-and-labor price tag sufficiently hefty to make an owner consider an upgrade. These, Roth said, can include worn-out heat exchangers or shells with significant corrosion issues. 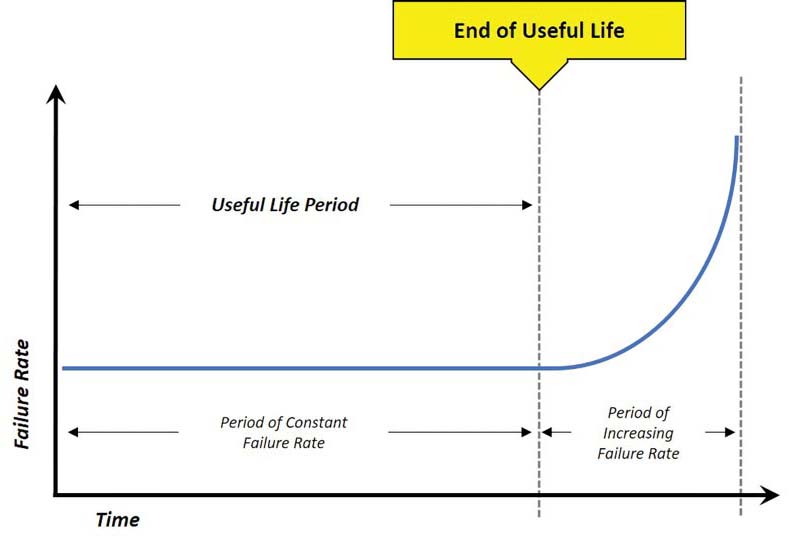 INSIDE INFO: Internal or external factors can compel a chiller replacement. As for internal performance, EMCOR's Don Newell and Andrew Swanson agree that “the easiest way to know if a building is ready for a chiller replacement is by analyzing a system’s failure rate over time.”

For that reason, said Newell and Swanson, “the easiest way to know if a building is ready for a chiller replacement is by analyzing a system’s failure rate over time.”

Failure rate over time is one metric, but contractors can keep in mind that external timing can play its own role, said McKew.

“Some owners can’t afford a chiller failing as they go into the air conditioning season.”

He also pointed out that another niche for work rests in between ongoing maintenance and installing a new unit.

“Quite often, the really large chillers — e.g., 1,500 tons or more — may get rebuilt rather than replaced.”

From software to operational adjustments, optimization tools and strategies have entered the modern era of chiller maintenance. 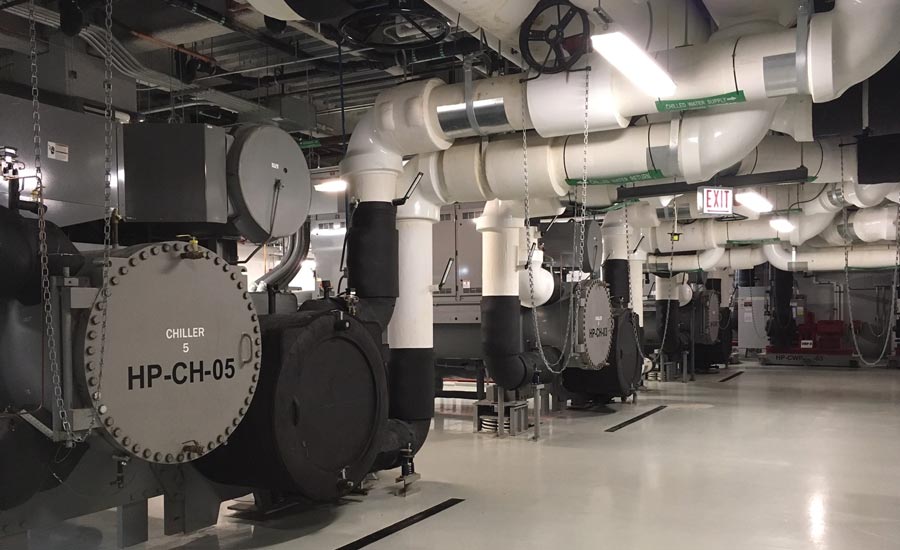 ENVIRONMENTAL MATTERS: An institution may change to a chiller with a lower GWP as part of a sustainability mission statement. In the more immediate environment, factors like proximity to sources of higher emissions can contribute to a shorter useful life, a factor that those drafting maintenance agreements should consider.

EMCOR’s team emphasizes that owners can partake from these options on a sort of sliding scale, depending on budget and situation.

For starters, “we often recommend adjusting setpoints for chilled water and condenser water temperatures, which can boost energy performance by 5 percent,” they said.

Such tactics may eventually require additional monitoring. They assessed that “implementing basic supplemental automation often pays for itself by improving energy performance by 15 percent or more,” diminishing or postponing any performance slip as a contributing factor for replacement.

While assorted bits of HVAC so-called conventional wisdom have become (or have been discovered to be) obsolete as monitoring and technology have improved, Swanson and Newell offered one contemporary rule of thumb.

“If you have at least 300 tons of capacity, there is likely an optimization that can be justified by savings.”

For service contractors, familiarity with these options can play into a greater strategy to extend chiller performance and longevity for customers.

Doug Burds, Trane commercial sales enablement leader, noted that an early key for any eventual replacement plan is an accurate understanding of any existing practical impediments.

“The worst mistake that can be made is to be planning for replacement of a unit that cannot be replaced,” he said.

He explained that once a decision is near or even has been made, contractors and owners must look further downfield than they might assume.

“In general,” Burds said, “once the decision has been made to replace the unit, needed maintenance tends to be ignored, which forces the matter.”

Burds explained that at this point, concerns that may have seemed distant for owners and contractors alike can suddenly become uncomfortably problematic: units blocked in by boilers or other equipment, equipment in penthouses and subbasements, and code or access issues that make replacement costs exorbitant.

“Do not rely upon the false assumption that a replacement is an easy and straightforward matter,” Burds cautioned.

Contractors should consider variables beyond the mechanical system, such as location and ambient conditions, when crafting a maintenance plan. After all, the more accurately it assesses real-life needs, the better protected its profit margins will be as well.

“Proximity to industrial plants or urban centers with high emissions has a negative impact on chillers,” EMCOR noted. They observed that operation after hours or beyond typical cooling seasons “will also face accelerated component and equipment degradation” that a contractor’s plan would need to account for.

On the bright side, they said, many buildings can employ other measures to save energy or use “free cooling” economizers to lower runtimes.

Trane’s Burds added that a good plan will also check on factors such as water treatment and system temperatures.

Maintenance Agreements: What Are They Worth?

Contractors can relay potential transitional or performance issues well before arriving at a replacement scenario. Those conversations may be easiest to have within the structure of a maintenance agreement relationship. No one doubts the expense of the equipment involved, yet a preventive maintenance investment may still require persuasion or justification, either in general or while competing for a contract.

The common question contractors can expect remains the same: How much difference can a maintenance agreement make with regard to chiller longevity?

“Compared to equipment that only gets repaired on a reactive basis when something goes wrong,” EMCOR’s team said, “a chiller with a routine maintenance program can easily add 10 years or more to its operating life.”

Newell and Swanson said it can also be a matter of getting what you pay for, with higher-end plans including targeted enhancements.

In McKew’s experience, “well-maintained chillers can exceed their estimated useful life,” which he considers as generally 20 to 23 years. Proper maintenance (or lack thereof) may pack a bigger punch on the other side of the decision, where McKew estimates that “without a proactive service contract, the owner could come up short by five to eight years,” in addition to reliability issues along the way.

Similarly, EMCOR had estimated the lack of preventive care can translate to nearly half off an expected lifespan and a 25 percent drop in operating efficiency.

For many systems, efficiency differences much smaller than that represent meaningful impacts on yearly budgets and expenses.

McKew recalls that in the 1990s, a full-service contract was budgeted at $12/ton “versus replacing a chiller that was $150/ton or more.” Understanding that costs have gone up, he estimates that a roughly 10-to-1 ratio of buy-versus-maintenance costs likely remains.

“Once [an owner] invested in a chiller, you didn’t want to short-change the maintenance and run the risk of premature chiller failure,” McKew said.

That concern hasn’t gone anywhere. Neither has the contractor’s burden of having to win the work and cultivate a relationship, which done right can navigate from the end of one chiller’s lifespan and into the beginning of another.

Chiller replacements can spring from more circumstances than one might expect. Contractors who do chiller installation work might keep in mind these categories of possible customers, dealing with anything from the most traditional causes to those driven by newer trends, based on a list from Howard McKew, P.E.

McKew said, “We could buy the older chiller for the “salvage” estimate ($8,000 for A 1,200-ton chiller) the HVAC contractor carried and they would pocket the “environmental disposal” cost, and we’d install the older chiller into another existing central plant that needed a chiller to get them thru 6-10 years before investing in a new chiller plant (or to be a standby unit).”