At its recent public workshop, the California Air Resources Board (CARB) discussed its proposals for reducing high-GWP HFCs from stationary refrigeration and air conditioning equipment. Under regulations passed in 2016, California is committed to reducing HFC emissions by 40 percent below 2013 levels by 2030.

Due to the fact that many low-GWP refrigerants are flammable, changes need to be made to building codes and standards — as well as by Environmental Protection Agency (EPA) — before they will be acceptable to use in HVACR equipment. OEMs are still waiting for clarity on this point, and with the deadlines just a few years away, they are concerned about meeting California’s aggressive timeline.

Leading the discussion regarding air conditioning equipment was Kathryn Kynett, an air pollution specialist at CARB, who expressed optimism that OEMs will be able to design <750 GWP equipment in time to meet the 2023 deadline.

“The a/c industry has a long history of successfully developing products that meet environmental goals and recognizing the critical importance of refrigerants on climate change,” she said. “The industry’s been working for over a decade on transitioning to identify and bring solutions to market that are more climate friendly.”

To that end, it is already possible to buy types of room or window air conditioners that use R-32, which has a GWP less than 750; however, CARB does understand that there are specific challenges to bringing low-GWP technologies to the California market, said Kynett. That’s because while other countries around the world are already using equipment that utilizes low-GWP refrigerant such as R-32, it is primarily being used in ductless and VRF systems. In the U.S., ducted systems are predominantly used, and R-32, as an A2L refrigerant, is currently not approved for that use. For that to change, codes and standards would have to be changed by the appropriate entities (e.g., UL, ASHRAE, EPA) before manufacturers could consider using this type of refrigerant in their equipment.

“One of the main compliance pathways that manufacturers could take is to use an A2L refrigerant, but they would only be able to use that refrigerant if it is listed as acceptable in the California building code, which means updates would be required,” she said. “We understand there’s an ongoing process that is being run by the California state fire marshal, so we’re watching to see how that develops. But we believe that this compliance pathway may become available and allowed for use in California by 2023.” 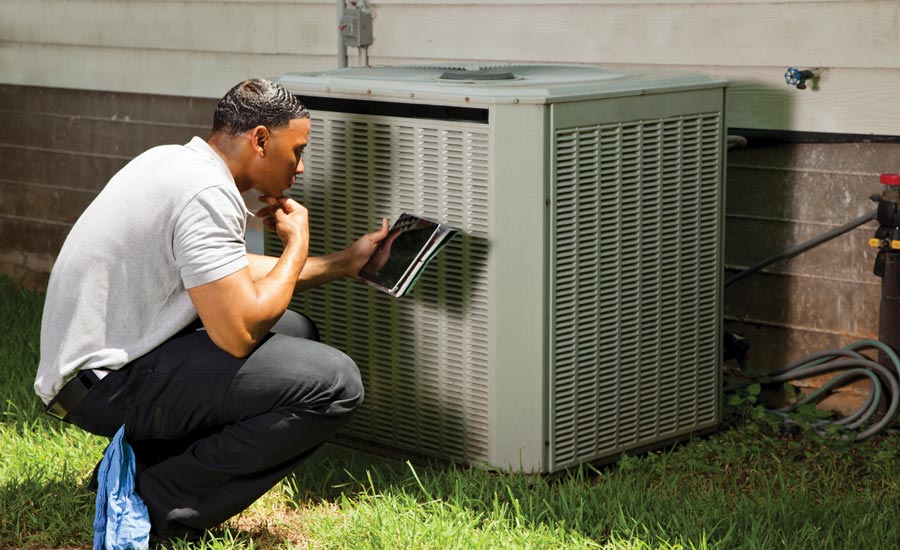 This definition was intentionally made broad in order to apply to all residential and non-residential equipment, including ducted and ductless systems, room air conditioners, and dehumidifiers, she said. Because it would apply to new construction, as well as new condensing or evaporator units that are shipped to California for existing systems, OEMs wondered how this would affect repairs.

Karen Meyers, vice president of government affairs at Rheem Manufacturing, asked, “If an R-410A system is working, except there may be a leak in the indoor coil, are you saying that instead of just replacing that coil, [the end user] would have to also replace the outdoor unit?”

Kynett answered, “You can repair components of the indoor coil system, but you cannot wholly replace that indoor unit. The reason we arrived at this proposal is that we feel that it would be a major loophole. We have concerns about allowing single evaporator units or condensing units coming into California as one-offs. Then it would be very difficult for us to distinguish between a partial system replacement versus individual units coming in and keeping the systems [operating].”

Dave Demma, national account manager at United Refrigeration, followed up, noting, “What are the ramifications for the consumer? If an evaporator fails or maybe a condensing unit or a compressor fails, at what point does that consumer have to completely re-establish their system to something new?”

Kynett responded that for R-22 systems, partial replacement is effectively illegal, but for R-410A systems, repairs would still be allowed.

“We’re working to better understand one-off replacements of the indoor unit, but what we’re not prohibiting here is repairs,” she said. “So if part of a system fails, we expect for technicians to be able to continue to repair it, and maybe a more robust repair market will start to emerge from that.”

Another OEM in the audience raised the question concerning whether there would be any restrictions on the use of R-410A or R-22 to service existing equipment.

“We had discussed a proposed service ban in our previous workshop, and that’s something still on the table, but right now in this proposal, we’re just focusing on the equipment prohibitions,” said Pamela Gupta, a manager at CARB. “We are very aware that especially for a/c systems, there are no replacements, so we’re just talking about servicing existing systems. More evaluations are needed, and that’s something we’ll be discussing in the future.”

Kevin Messner, senior vice president of policy and government relations at the Association of Home Appliance Manufacturers (AHAM), raised concerns about whether or not an alternative refrigerant will be available for use in dehumidifiers by the 2023 deadline.

“R-32 is not allowed by EPA, so it would be a violation of federal law to use R-32 in a dehumidifier,” he said. “How do you see that dehumidifiers could meet this, or would they just be taken off the market?”

The response from CARB was that dehumidifiers are included under UL 60335-2-40, similar to other air conditioning equipment, and when those are approved, dehumidifiers will automatically be approved as well. In addition, R-32 is just one of the refrigerant solutions, so CARB believes that other non-flammable refrigerants are under development and all options are on the table.

That didn’t assuage Messner, who noted, “You’re keeping the 2023 [deadline] with the hopes and prayers that EPA will act. That doesn’t give us a whole lot of certainty on the future — to ban something without an alternative coming. We would encourage you not to include dehumidifiers until there’s an alternative that can be used. Because if that all falls apart, you’re not going to have dehumidifiers available for sale in California. And then there has to be time to actually create and design a dehumidifier for the alternative refrigerant, whatever could be approved by EPA. So a word of very serious caution.”

But as Ruben Willmarth, national manager of owner sales at LG Electronics, noted, “There just isn’t time between now and 2023. If some of the new refrigerants become available this year, as I hope they do, that will at least narrow the choices, and then we have to look at application impacts. If it goes for an A2L refrigerant, we are still waiting for what the application code will be and when that will be adopted in order for us to then design equipment that can comply with those regulations. We can’t design until we know what those regulations are going to be. So we could literally be in 2022 before we have full clarity of what we need to do, and that’s too late. You can’t design new equipment in less than a year. It’s too late already.”

Aanchal Kohli, a scientist at CARB, responded, “By the end of this year, we will have more clarity on what is going to go into the building codes for 2023, which will give manufacturers over two years to be ready. We also don’t have a restriction on the date of sale — it’s on the date of manufacture, so you’ll have a little bit of extra time to still be able to sell equipment, as long as it was manufactured prior to 2023.”

An update on CARB’s proposed commercial refrigeration regulations will appear in a future issue of The ACHR NEWS.