A2L Refrigerants: Coming Soon to a Truck Near You

The door to mildly flammable refrigerants opens, but the ride isn’t free

“One of our larger contractors, with potentially more than 100 vehicles, said that doing just back-of-the-napkin math, this could represent a $100,000 hit to their company.”

With that, Todd Washam, ACCA vice president for public affairs and industry relations, offered one rather gloomy but possible scenario of retrofitting contractor vehicles for an era where carrying mildly flammable A2L refrigerants is part of the daily routine.

Recent legislation in Congress is forwarding the idea of an organized HFC phasedown, bringing A2L refrigerants one small step closer to becoming commonplace. Discussion surrounding A2Ls often tends toward safety protocols during installation/maintenance or their performance characteristics, but A2Ls first have to get to the service call or job site.

That means adjustments for HVAC service trucks and vans.

NOT QUITE THERE YET

Like so much else in this long, drawn-out refrigerant evolution in the U.S., specifics regarding new vehicle requirements are essentially nonexistent and should be considered entirely unofficial until they become official.

Some certainty may not be too far off, though, according to Alex Ayers, director for government affairs at Heating, Air-conditioning & Refrigeration Distributors International (HARDI). Ayers is part of the AHRI Safe Refrigerant Transition Task Force, which is presently working on vehicle requirements.

Ayers hopes that group will have something detailed to share soon. In the meantime, he gave The ACHR NEWS a bird’s-eye preview of what contractors may face.

“The two biggest changes for contractors and technicians will be in the storage of cylinders and placarding of the vehicles,” he said.

The placards would be the most obvious and least expensive alteration for contractor vehicles. The U.S. Department of Transportation (DOT) already requires standard signage indicating flammable compressed gas on board a vehicle, regardless of the class of flammability involved. 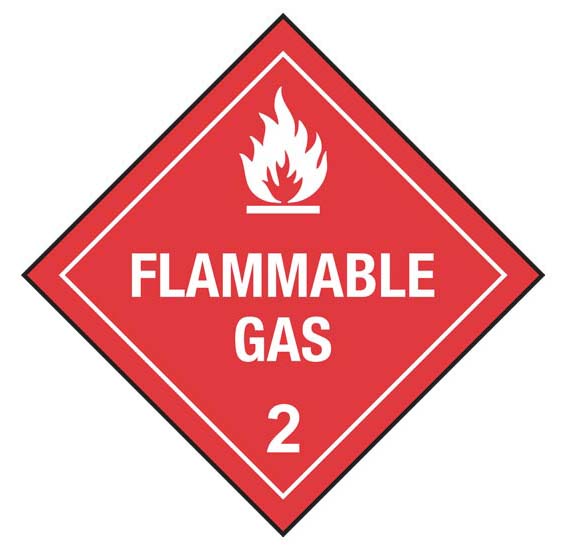 SIGN OF THE TIMES: A2L refrigerants are Class 2 hazardous materials as defined by the Department of Transportation. When contractors start carrying them, new placards will be part of the deal.

Casual investigation shows that a single 11- by 14-inch aluminum placard of this sort can run somewhere in the $20 to $40 range. Cheaper versions include plastic placards or adhesive vinyl that goes on the vehicle like a sticker.

Forthcoming requirements will presumably include any parameters for acceptable dimensions and materials, as well as how many placards might be required per vehicle. The DOT also requires identifying placards on the cylinders themselves, but this would likely not be a contractor’s responsibility.

“Refrigerant cylinders containing mildly flammable refrigerants will need to be stored vertically so that the pressure relief valve is in contact with the vapor space of the cylinder.”

DOT rules already require as much, so that aspect is not new for gas transport. It does represent a change for many HVAC contractor vehicles that store currently popular refrigerants horizontally.

HARDI’s Ayers did not hazard a guess regarding how much it might cost to reconfigure a common canister storage arrangement.

No such mystery exists in countries where A2L usage is already common, and their regulations offer a hint at the possible range of requirements in this area. ASHRAE RP-1807 (Guidelines for Flammable Refrigerant Handling, Transporting, Storing and Equipment Servicing, Installation and Dismantling) surveys the rules abroad. 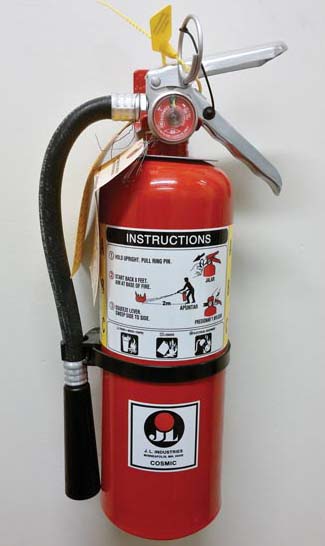 KEEPING POWDER DRY: Some vehicles might not need this particular upgrade, but a dry-powder fire extinguisher capable of handling Class B fires needs to stay on board with any A2L refrigerants. PHOTO COURTESY OF BRETT HONDOW

In Europe, the relevant agreement states that “vehicles should be well ventilated.” Drivers must carry information about the load, along with an adequate fire extinguisher. Australia requires that any such flatbed or utility vehicles come equipped with locked cages to prevent theft of cylinders. In Canada, which has not established the same sort of separate category for A2Ls that the U.S. has, such transport is prohibited without a permit.

The DOT rules for transporting these substances echo the need for ventilation, a written inventory, and some level of security to prevent unauthorized access.

Contractors may want to check their current on-board fire extinguishers to see if they meet DOT requirements for a dry-powder unit capable of handling Class B fires.

As ASHRAE RP-1807 mentions, some manufacturers already employ best practices involving training, certification, tools, and even databases of techs to promote safety and proper installation or maintenance on their products. The move to wider deployment of A2L refrigerants may require more contractors or more of their employees participate in such programs.

Some jurisdictions require not only the vertical orientation of A2L canisters but their storage in explosion-proof chambers during transport as well. Jon Bezon is the association and event development manager for Adrian Steel. His company is an ACCA corporate partner, and he said that their advance development team is currently working on a vertical tank holder prototype. Upon completion, Adrian would then send that to a small contractor group for some field use and feedback to incorporate as needed.

Bezon could not offer any preliminary illustration or cost estimates at this stage, but he did assume that a vertical product’s cost would come in around the same as the currently common horizontal tank rack.

Bezon’s conversations with contractors at recent ACCA events raised yet another question: Would these retrofits involve a total swap-out of horizontal for vertical racks, or could it make sense for a contractor to add some vertical storage for A2L refrigerants while keeping some horizontal storage on the truck for reclaim tanks and other needs?

A mix of storage may best serve a contractor’s needs in the field, but it would also create additional demands on vehicles as far as space management.

For the moment, contractors might look into their vendor options for placards and for reconfiguring canister setups. The AHRI task force report should eventually fill in many of the remaining blanks. At that point, the number of vehicles that a given contractor has to equip for A2Ls will shape whether these transition specifics have been more of a mid-dollar mystery or a $100,000 question.

Washam speculated that, like many existing rules for flammable gas transport, any new requirements for A2Ls will be volume-dependent. The true overall impact on contractor vehicles would then likely depend on where the threshold lands, versus how much refrigerant those vehicles might carry.

A more favorable threshold could point toward a reality where contractors have to reconfigure their canister storage in all trucks but could safely avoid investing, for example, in installing vents and/or fans in the roof of each service vehicle.

In April of this year, ASHRAE senior fellow Richard Lord presented at Carrier’s Refrigerant Update Affiliates Forum. Looking at the bigger picture for codes and code update cycles, Lord noted that the ICC-based 2021 codes were not updated for A2Ls. He anticipates those codes, which many states tend to use as the basis for their own codes, will be updated with the 2024 cycle.

Echoing the recent HFC phasedown situation, that leaves open the chance that some states or localities could implement their own regulations for A2L transport in the absence of larger-scale guidance. Contractors working near state lines, etc., would need to stay informed and prepare accordingly.

Another unknown: How, if at all, will contractors’ fleet insurance policies and premiums react to mildly flammable gases riding along more regularly?

For the moment, contractors might look into their vendor options for placards and for reconfiguring canister setups. The AHRI task force report should eventually fill in many of the remaining blanks. At that point, the number of vehicles that a given contractor has to equip for A2Ls will shape whether these transition specifics have been more of a mid-dollar mystery or a $100,000 question.