Trends in the Smart Thermostat Market

Anticipating problems is on manufacturers’ minds, but where is the real payoff for contractors?

His colleagues in the industry used a few more words to paint inside the frame that LaNois hangs around the state of this equipment sector.

Ed Blittschau of White-Rogers, for example, pointed to maintenance. He is the company’s vice president for marketing and business development, within Emerson Commercial and Residential Solutions. Blittschau’s brand backs that up with 10 sensors to monitor a system’s performance and efficiencies. Products like Sensi Predict aim to give homeowners as much detailed info as they want, while giving contractors the information they need before (and, preferably, to ward off) a more substantial service call.

LaNois, who focuses on Nest products, also mentioned a “furnace heads-up” that alerts the homeowner, who would then contact their contractor or Nest Pro installer to look into a performance anomaly.

Sweta Hari, director of product management for controls and indoor air quality at Lennox, mentioned the manufacturer’s efforts to provide thermostat technology to customers that “fits their individual style of comfort.” Sometimes, that might include “allergy defenders” on an offer. However, Lennox designers also work to serve customers when they’re away from home, rolling out geofencing capabilities in their latest line (S30, E30, and M30).

“A homeowner knows how they want to feel in their home,” said Hari. “And it’s up to us to ensure they live in their perfect air environment.”

That sounds simple, but constantly delivering a “perfect” indoor environment, steered from a piece of software on a cell phone, is a goal that neither homeowners nor manufacturers would have said out loud all that many years ago.

A few forward-thinking homeowners may develop a technology wishlist for the world around them. But as technologies develop apace and companies sort out better ways to make them work together, new features are less likely to elicit a “Finally!” than a “Wow, I hadn’t thought of that” from most consumers, he said.

The situation recalls Steve Jobs’ observation that “a lot of times, people don’t know what they want until you show it to them.”

“Smart thermostats don’t have to be difficult and time-intensive to install.”

Hari set down another principle for makers and contractors in the smart thermostat era. Sometimes, it’s not the thermostat but the house that complicates things, in the form of a C-wire — or, more accurately, the lack thereof. 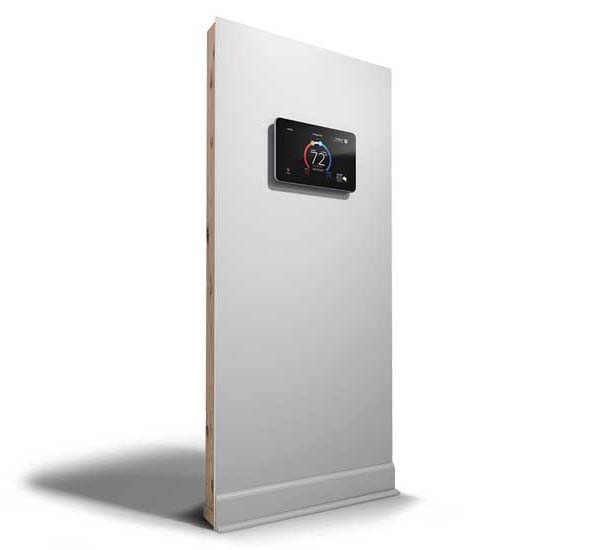 CONTINUITY ON DISPLAY: As manufacturers strive to replicate the traditional experience in their mobile apps, the displays on thermostats themselves (such as this Lennox iComfort unit) have also assumed a style familiar to smartphone users.

Older homes are less likely to have an existing C-wire to the thermostat. That means potential additional labor and cost to run one for a new unit. Hari said that Lennox has focused on providing a four-wire installation for two of its recent models without sacrificing a customer-friendly 7-inch HD touch display.

White-Rodgers also designed its latest to not require a C-wire in an effort to keep the installation smooth. Of course, the C-wire is there, or gets put there, for a reason.

Existing building stock means that the occasional conversation with customers about whether to add a C-wire won’t disappear anytime soon, but LaNois concurred that the less the consumer has to delve into that area, the better for everyone.

“The consumer is generally not aware of power demands … nor should we expect them to be.”

After all, as Hari mentioned, faster installation means a greater chance to focus on building good relationships with customers, whether through other discussions or just saving some time out of the customer’s day.

More room to streamline the process exists beyond the C-wire. Blittschau said that White-Rodgers’ Sensi was “designed with contractors in mind,” featuring a built-in level, easy-click terminals, and terminal lights. For a consumer-oriented touch, it maintains a standard footprint, reducing the odds that a wall will need touchup afterwards.

Apps are quickly becoming standard-issue for modern thermostats, but they’re not just for homeowners. Hari mentioned the Lennox iComfort mobile setup app, allowing the tech to enter all relevant parameters through a smart phone. White-Rodgers provides an intuitive app to guide techs through the process as well.

“There will always be some outlying cases where a non-WiFi connected thermostat could or should be used,” acknowledged LaNois, “but for the most part, connected/communicating products are a better way to go long term.”

That opinion may not be surprising coming from someone in LaNois’ position, but more significant for contractors is research suggesting that more and more homeowners are coming to the same conclusion.

Bittschau reported that over the last three years, the smart thermostat adoption rate in the U.S. has tripled from 4 to 12 percent, as of this year’s IPSOS Omnibus study. In Bittschau’s assessment, that puts the smart thermostat evolution in the “early majority” in terms of participants.

The potential bonus in that data for contractors and manufacturers is that the early adopters typically will be more tech-savvy or DIY-inclined by nature. White-Rodgers believes that as the general population embraces this equipment, they will be more likely, on the whole, to call a contractor to perform the work.

“Learning features is not a top priority when customers are considering a smart thermostat.”

That may not be the expected main takeaway in an age of constantly expanding capabilities, but that’s what Blittschau’s company research concludes.

Just as a larger interested audience portends a greater inclination to hire a professional, it also may herald more homeowners who want the technology and its benefits without getting elbow-deep in interactions. 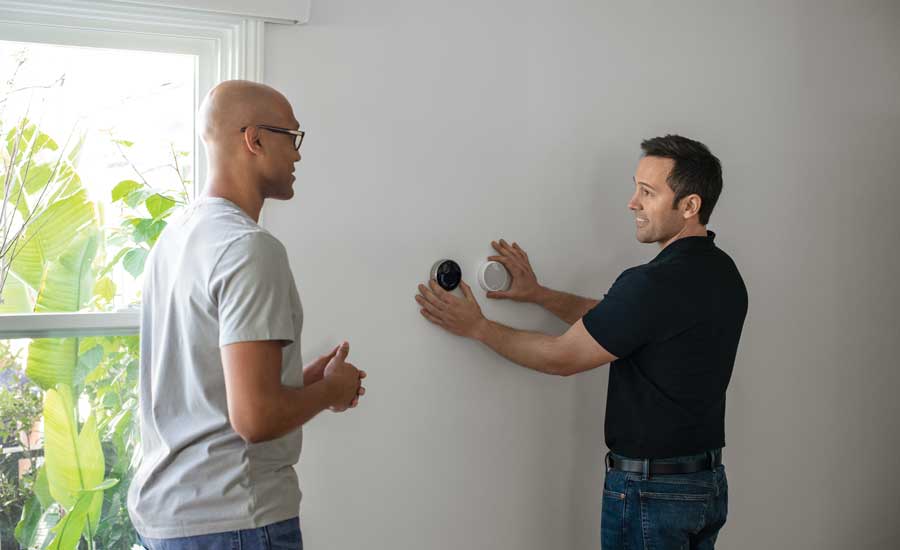 PRODUCTIVE CONVERSATION: Among the talk about placement and color, Google’s Gene LaNois said the real value in smart thermostats installation lies in learning about customer interest in other smart devices, like locks, lighting, and voice assistants. PHOTO COURTESY OF GOOGLE

White-Rodgers assesses that “being able to set a schedule of use geofencing are more practical features for most consumers.”

That ties into the larger smart thermostat argument that their benefits actually align better with owners’ real-life usage preferences, compared to previous-generation thermostat features that may have more frequently gone unused.

Increased excitement over smart thermostats also doesn’t neutralize comparative price concerns. Lennox made a point to release three options with their own mixes of abilities and expense.

In more of the “people will pay for effectiveness” vein, consider the piece of pricing history that LaNois brought up.

“Nest really set the pace, launching the first Nest thermostat in 2011 for $250. Nobody thought that was possible, and look where it has driven the business today.”

Today’s users may not want to spend too much spare time studying up on advanced options, but one capability seems to be rising above the others.

“The feature that is growing a lot is the use of voice to change a temperature or setting,” LaNois said. “It’s just so darn convenient!”

Hari noted that Lennox has worked to respond to the desire to avoid closed platforms and preserve interoperability between a smart thermostat and other brands already present in the home. As a result, the iComfort line works with Amazon Alexa and Google Hub. Citing a heavy iOS delegation in Lennox’ user base, the company also offers Apple Smart Home connectivity and other options (If This Then That, or IFTTT) for the incoming “digital savvy consumer who likes to personalize their own smart home recipe.”

If voice commands are the loudest bell in the smart thermostat portfolio, contractors’ favorite whistle may not even be in the manual.

LaNois is confident that this equipment is “THE entry point” for contractors into the incremental revenue opportunity of smart home business. Homeowners often start with thermostats before moving on to things like voice assistants, camera, locks, and lights, he said. Lanois pointed out that for contractors, everything is often already in place to incorporate those additional products into the business model: tools, vehicles, customer base, labor, insurance, etc.

With regard to those opportunities and many contractors’ year-to-year existence, LaNois noted one particularly meaningful possible impact.

“Thermostats can be the offset to seasonality and shoulder seasons.”

WHEN THE APP IS THE MAIN COURSE

For homeowners, staying on the sofa is the new walking down the hallway. In practical terms, a manufacturer’s choices surrounding app design and performance have become arguably as important as the thermostat itself.

“A big focus is put not just on the front-end design,” Hari said, “but also on the back-end stability of the applications.” She said her company’s keywords in this area are “consistent, reliable, and easy to use.”

White-Rodgers’ Sensi app allows contractors to add their contact info directly to their customers’ phones as an added convenience.

“We are committed to HVAC professionals,” said Blittschau. “We will continue to focus on how to connect contractors to their customers.”

Blittschau adds that in his company’s experience, homeowners may indeed choose a thermostat based on the app experience alone. That is why the company responded to customer feedback to provide usage reports, data, and easy monitoring for historical and daily heating, cooling, and fan runtimes from the app.

“In general,” LaNois echoed, “when consumers are rating our product, they are generally rating their experience of using the product through the app.”

Or to put it another way, he said, the goal is a simple and clean design “to make the experience in the app as much as possible the same experience as if you were standing in front of the product.”

That brings the conversation around to an irony of the modern age of HVAC. Part of what draws the public closer and closer to purchasing a smart thermostat is the fact that they may never have to stand next to it.