What Makes a LEED Contractor?

“Subcontractors, primarily, are creatures of habit. Unless they have worked for me, Little Rock’s only active Energy Star builder, then they haven’t been exposed to any of this, with the exception of what Energy Star promotes.”

That observation is courtesy of Keith Wingfield of River Rock Builders LLC. The topic of the day was the Owen residence in Little Rock, Arkansas, which earned LEED Platinum status last year and has since picked up multiple awards including “Residential Project of the Year” from the Arkansas USGBC community.

The farmhouse-style, net-zero home of 2,662 square feet demonstrates that LEED projects can rely on a lot more than efficient HVAC to certify. Forty-two photovoltaic panels produce all the required energy. The landscaping, rain barrels, and even the driveway material contributed to its rating.

Inside the house, Innovative Heat and Air, owned by Dallas Henry and located in Mabelvale, Arkansas, took on the HVAC work. The team used Manual D, J, and S software runs to guide equipment, duct, and return locations.

“We believe planning during the framing stage eliminated a lot of problems,” Wingfield said.

They arrived at a 2.5-ton American Standard ground source heat pump with 17 SEER on the cooling side and 9.2 HSPF on the heating side. The unit includes a variable-speed air handler and two stages for both heating and cooling.

“Contrary to some alleged experts, we have had zero problems with moisture with this type of insulation,” reported Wingfield. “While I would not recommend this for northern climate zones in a warm, humid climate zone like Zone 3, this is a perfect way to keep moisture out and semi-condition the attic assembly.”

He went on to mention that the system includes an Air King QuFresh air cycler to introduce fresh air into the home in a measured way. In Wingfield’s experience, a properly set unit prevents the extremes of cold and heat and high humidity from becoming a factor.

Speaking more generally, Wingfield observed “the three main problems I see in HVAC installations in other homes besides ours” are equipment oversized by 30 percent or more, ducts leaking by 25 percent or more, and return air supply that is inevitably too small.

“I hear it all the time from other vendors … they are scared to get the call from a customer saying that the house just won’t cool. Size correctly in all respects, and they won’t get that call.”

Wingfield said that the mandatory LEED credit for subcontractor green education and training had been challenging to achieve. So while he confirmed that both Innovative Heat & Air and the insulation contractor “were already experienced in sustainability,” River Rock had to commit some of its own time and resources to educate other subcontractors.

Recently, data from an August 2019 USGBC report titled “LEED in Motion: Residential” showed that LEED-certified residential units and projects are enjoying a significant upswing. After a slight off-year of 54,475 homes in 2016, the next year’s tally bounced back and then some, up to 65,699. Then 2018 saw another jump of almost 20 percent, finishing at just over 78,000 for the year.

This year, USGBC opened registration for LEED v4.1 Residential, updated to reflect changing trends and technologies. Contractors can learn more about it at https://new.usgbc.org/leed-v41#residential.

Ask consultant Mark Price of Price Sustainability Associates in Maynard, Massachusetts, which green products he sees on the rise, and he’s got an answer at the ready. 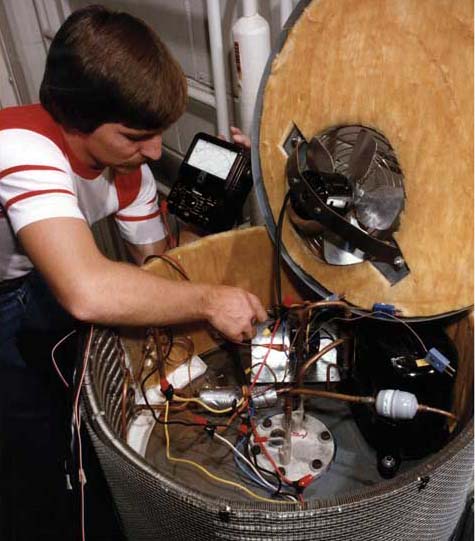 LAB SPECIMEN NO MORE: Technician Phil Childes uses a multimeter to check connections in a heat pump water heater as it was being installed in Oak Ridge National Laboratory’s energy conservation lab in 2014. Now, Scott Pusey of Steven Winters Associates singles these out as an equipment type gaining traction alongside their mini split cousins. PHOTO COURTESY OF FLICKR/DEPARTMENTOFENERGY

“Heat pumps,” he said without hesitation. Price cited the money and technical expertise being invested in training professionals on the equipment.

“So it’s that and photovoltaics. Traditional furnaces and air handlers have dominated the marketplace for as long as I’ve been involved, the last 20 years. But in the last several years, things have really shifted, and the utility programs, maybe a year or two ago, started to roll out some really lucrative subsidies for the heat pumps.”

“We see efficiency programs offering more and more incentives tied to electrification,” he said. “Tied to the electrification push, we see a growing market for heat pump water heaters. In multifamily applications where integrated systems might not work, manufacturers like Sanden and Colmac interest us because they have higher capacities needed to work as centralized systems.”

Government-related incentives may push LEED adoption beyond just heat pumps, depending on the locale. The city of Cincinnati, for example, offers a 10-year, 100 percent property tax exemption on the improvement value for either a new construction or renovation project. Projects earning LEED Silver and higher can win even longer abatement periods, and the program in general applies to certain other green certifications in addition to LEED.

NOTES FROM A LEED RATER

In his role, Price doesn’t design any HVAC, but he may help to coordinate the project team, including a kickoff meeting. In something like a high-end single-family residential project, that might take place before the design is truly final. In fact, asking for contractor input and ideas at that stage tends to lead to both a better team dynamic and a better end design and result, King said.

“After the initial pass at design, we’ll call in HVAC companies and say, ‘Hey, would you like to participate, come in and talk?’ That might go out to three or four companies.” Not all might want to, he said, but those who don’t are definitely not going to get the job.

“The high-end companies have a higher degree of confidence they will be working on the project,” he said. “They come in early to contribute to those initial design meetings. [Their owners] know what works and what doesn’t, and it’s a crying shame to leave that on the table.”

Asked to describe what other characteristics he looks for in an HVAC contractor to do this sort of work, Price sees some recurring qualities.

The company doesn’t have to be huge, but it has to be large enough to have a decision-maker available for those sorts of opportunities.

“A lot of smaller shops, they’re churning, they’re in the field,” Price said, acknowledging that many firms, including some he regularly works with, are stretched to extremes these days.

Often, he said, “it’s going to be a medium-sized company big enough so that the ownership, the rainmakers can actually go out and interface with these projects and end up getting the sexy work.”

Another common trait: stay in touch with current offerings and understand that technology is changing. Price used heat pumps as an example.

“You know, seven, eight years ago, a few pumps weren’t that great. They featured lower-end efficiency, and they included electric reheat in case it got really cold out,” he said, adding that the bar has been raised more recently and that company executives should be up on those trends before they walk into an early-stage meeting.

On a related note, companies should keep their skills sharp and pick up the credentials to show it, Price noted. If bigger manufacturers have a training center now, “Send your guys down there, show up there just to learn the new equipment … It does take a company that’s profitable enough to send your guys on education days,” he added.

Meanwhile, credentials (or the lack thereof) are an easy way for architects and builders on these projects to filter and narrow down the field of sub candidates.

That said, at the end of the day, Price said, “What you need to do is be able to right-size equipment” to deliver high-end, optimized systems.”

However, when it comes to the bulk of everyday projects, “I’d say the vast majority of HVAC contractors do not do load calculations in Massachusetts,” Price said. “They sub it out and ask the supply houses to do it.”

Problems can arise if a distributor isn’t asking about things like windows or going through the drawings thoroughly. The result could be “some fluffy example of a Manual J, and I look at them and compared them to my software and I’m like, no way, you were oversized,” Price said.

Price makes clear that consultants and LEED raters are not “the sizing police.” He said if he asks the HVAC contractor to provide the load calculations or a rationale for those equipment choices, what he’s really looking for is an answer.

“I’m more impressed and pleased to get a response because most guys won’t respond if they know there’s a rater who’s got software, generating his own calcs,” he said. “They don’t even want to get into that conversation,” because so many didn’t do it or didn’t do it accurately. “So if a guy comes back to me with an answer, I let it go, because I know he’s thinking about it. He’s got backup, and I’m not there to make him miserable.”

The idea, Price said, isn’t to bust it all the way down to exactly what his software said. But he’ll explain to the owner that “there’s no guarantee the guy’s going to come down, but if you can drop your two 4-tons down to two 2-tons, there’s going to be some credit there.”

And saving, too. Spotting and correcting the more extreme oversizing can pay for Price’s fee on a project all by itself.

As the amount of LEED work increases for contractors prepared to do it, the type of work is expanding as well. Some of it, not surprisingly, is higher-end, like the Owen project or the multimillion-dollar project outside Boston that Price recently worked on. However, the recent USGBC report states that “LEED is a tool for economic development and has been used by policymakers to guide affordable housing development.”

According to the Council, more than 78,000 residential units qualify as affordable housing and are participating in LEED.

LEED’s breadth may be expanding across demographic lines, but even more opportunities to foster greener systems still await HVAC contractors every day in their usual calls. Pusey sees HVAC contractors influencing greener outcomes in a couple of areas. The first is in making the case for high-efficiency equipment when replacement is on the table.

“Having a contractor connect the homeowner to a rebate program is key,” Pusey explained, “as the programs are usually designed to cover the extra cost of the higher-efficiency equipment.”

The other area is IAQ. Filters often come to mind first, but according to Pusey, a bigger opportunity may await in the kitchen or bathroom.

“Many times, older fans are underpowered and noisy, leading many homeowners to not even use them,” he said. “Replacing them with quieter alternatives that actually exhaust the dirtiest air from a home is a win-win for both the contractor looking for an upsell and the homeowner’s desire for better air quality.”