Neuco Opens Its Facility of the Future

The new facility is three times the size of Neuco’s former location, a conglomeration of two different sites and additions on top of additions. Now, everything’s under one roof. The new operation employs 145 full-time staff members; Neuco kept everyone who worked at the previous facility and hired more. 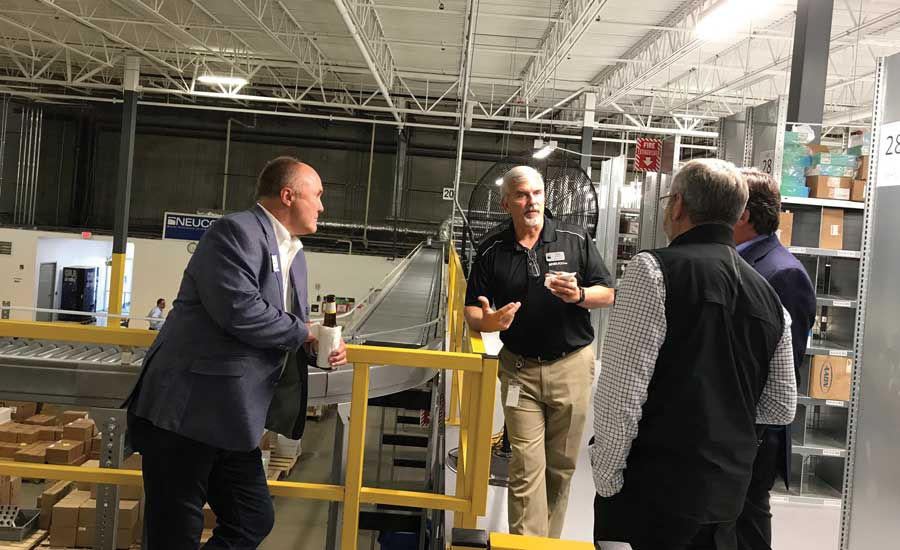 BEHIND THE SCENES: Neuco’s grand opening on June 20 included tours of the 145,000-square-foot facility in Bolingbrook.

“Everything is fairly automated,” said Paul Neustadt, president of Neuco. “But the goal was never intended to replace any manpower with automation.”

Planning for the move took six months to a year of almost daily meetings for Neuco’s ownership team. The actual physical move of shipping operations was a 4.5-day process.

“It was all hands on deck,” Neustadt said.

They closed early on a Wednesday in April. Office employees pitched in, pulling product off the shelves at the building in Downers Grove. Everything was sorted by size and velocity: the physical size of the package, and then how often it’s ordered.

“We had 18-wheelers going all day long, shuttling it over here,” he said. “Our receiving team would scan it in at the new facility and organize it on the shelf. By Monday morning, we were open at 7:30 a.m., ready to take orders.”

Neuco’s origins date to the early 1900s, when John Neustadt started a company delivering coal and grains to businesses in the Chicago area. As technology changed, the business moved into fuel oils, and then into heating controls.

That was the situation “until 1963, when Neuco first came about,” said Brian Zwolinski, marketing manager at Neuco. “And that’s when they truly committed to automatic controls.”

In 1979, the company moved to its previous location in Downers Grove with six employees. Forty years later, its size has grown to almost 150. Neuco has about 16,000 active web accounts across wholesale distributors around the U.S. and in Canada, where it serves as a master wholesale distributor. 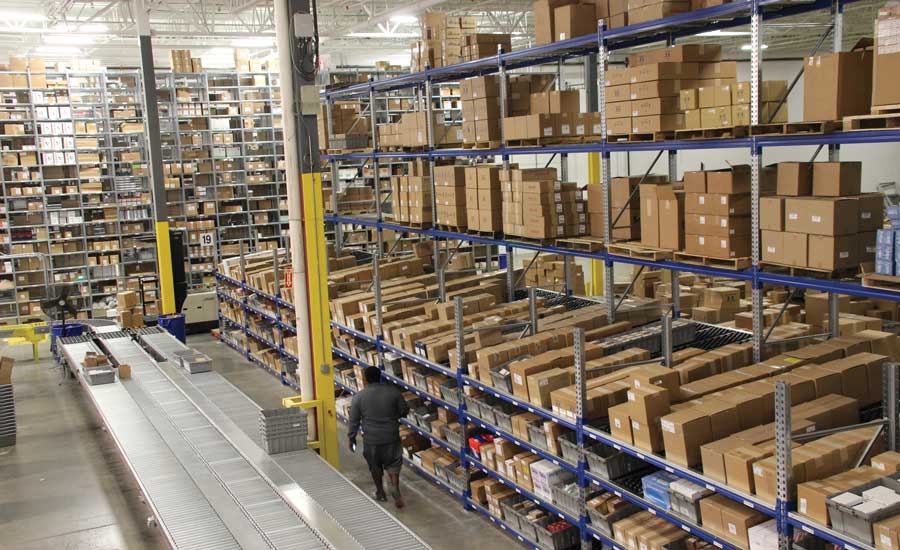 ORGANIZED INVENTORY: Neuco carries 260 lines of products, organized by barcoded labels. Some SKUs have only one item in stock; others keep hundreds.

“A lot of distributors stick with their core equipment lines [with specific manufacturers] and the parts for those,” said Zwolinski. “But we have, I think, 260 distinct lines right now.”

From the second-level mezzanine, a bird’s-eye view shows a bevy of conveyor belts, boxes, and rows and rows of shelves with barcoded labels to keep those 260 lines of products organized. Some SKUs have only one item in stock; others keep hundreds.

“That’s all monitored by our purchasing department,” Zwolinski said. “So as orders are being placed online or on the phone or through fax, our systems are updated, and our buyers are notified so they can place POs with our vendors to bring in more inventory.”

“The new facility has allowed us to really up our game in being able to serve our customers’ requests,” said Neustadt. “There were some bottlenecks in both receiving and processing orders that will be eliminated due to the new building.”

One of those was the number of loading docks — the old facility had four, while the new one has 11. Another was being able to design the material handling processes to improve the time it takes to process an order and get it out the door.

Six of the loading docks service the receiving area. Employees bring in the products, open up the packaging, affix a barcode to each product, and put them on the conveyor belt. Scanners and sensors along the conveyor system scan the barcodes on the side of the bins that carry the products and direct them to the proper location: either to the shelf location or directly to shipping.

“We get a lot of product from the manufacturer that isn’t individually boxed and ready for shipment,” Zwolinski said. “We’ll get a bulk shipment, or we might get 30 motors and they’re loose on a skid.”

As products come down the conveyor to be shipped, employees box them up. There’s lots of bubble wrap involved — or, for products that don’t come with packaging, a special foam that forms around the motor and solidifies to protect it during transit. At the end of the line, a machine above the conveyor belt sizes up the box with a camera and a scale and scans it to know whether it’s going through UPS, USPS, or FedEx. Then it prints a shipping label, sticks it onto the box, and sends it to the truck bay for the right delivery service.

“We have five doors here,” Zwolinski said. “At the other facility, we had two. So again, we’re adding more space for freight.”

The new location also includes training/event space, a photography studio for product shots for the website, a room for nursing mothers, a game room, and four call rooms for employees to handle personal calls or read and relax.

THE FUTURE OF DISTRIBUTION

Neustadt said the new building really takes advantage of the innovations that new technology has provided.

“The process of slotting inventory has been amazing,” he said. “Our distribution team takes in size, velocity, seasonal reorder points, and product characteristics when deciding where a particular SKU lives … quite a process that has already had great results in improving many aspects to the order fulfillment process.”

Neuco’s average order size is 1.2 items, meaning that many orders are for individual parts. October through February is the busy season. The record for shipments in one day occurred during that time, topping 5,000 orders. A typical day has somewhere between 2,000 and 4,000 orders, placed online, over the phone, or via email or fax — handwritten fax, that is.

“On our sales team, there’s three or four guys that all day long, they’re just transcribing faxes so that our system can understand, because they aren’t typed-out faxes,” Zwolinski said. “Not every wholesaler places their orders online. They might be a smaller operation with three or four employees, and they might not have the best internet access, but they still have a need for replacement parts.”

In the offices, there’s also a counter where orders can be picked up by local distributors and their customers.

“We do not sell direct to the contractor; that’s how we’re a little different from most distributors, because our primary customer base is wholesale distributors,” Neustadt noted. “As a master distributor, we’re bridging the gap between the manufacturers and distributors.” 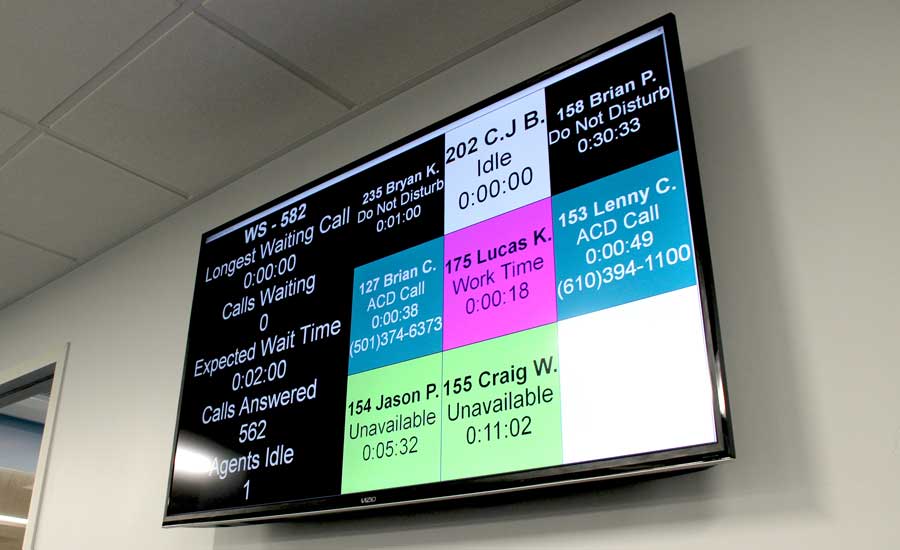 UP NEXT: The offices have a TV screen for the sales team, showing how many callers are in the queue, who’s next to pick up the call, and what the average wait time is.

The offices also have a TV screen for the sales team. The display shows how many callers are in the queue, who’s next to pick up the call, and what the average wait time is.

“In the wintertime, I always joke that our sales floor is like the New York stock exchange,” Zwolinski joked. “Everybody’s talking at the same time. It’s controlled chaos.”

If the timing is right and somebody places an order right before the orders are printed, it could be picked, packed, and on the truck within 15 minutes, Zwolinski said. The latest it would be sent out would be the next day — for example, if it were placed after closing.

“We tend to get really busy at the end of the day,” he said. “A lot of our customers, they’ll wait until they know that we’re closing in case they want to add on, to consolidate their orders and reduce the freight costs.”

Neustadt is pretty sure that intensified automation, like the type in Neuco’s new facility, is the direction wholesale distribution is headed.

“It feels like it’s almost like a necessity, as time goes on,” he said. “As a consumer, we all know how our expectations for how fast we want things has grown. It’s kind of got to the point of, I order something online and I want it the same day or in two days.”