This website requires certain cookies to work and uses other cookies to help you have the best experience. By visiting this website, certain cookies have already been set, which you may delete and block. By closing this message or continuing to use our site, you agree to the use of cookies. Visit our updated privacy and cookie policy to learn more.
Home » Controls-Con 2019 Introduces Building Technologies of the Future
HVAC Residential MarketHVAC Light Commercial MarketHVAC Commercial MarketTraining and Education for Contractors

In what felt like the atmosphere of an Apple product announcement, Scott Cochrane, president and CEO of Cochrane Supply and Engineering, welcomed Controls-Con 2019 attendees with a challenge to stop competing with each other and start working as a team.

“At Cochrane Supply, our No. 1 focus is to enable you folks to be able to use new technology and help you all be successful with that technology,” said Cochrane. “At the end of the day, we want to move away from the thought that we compete with each other and understand that we’re competing with the whole world that’s trying to bring tech into what we do.”

The conference posted a new attendance record, as 604 registrants from across the U.S. and Canada met at the MotorCity Casino Hotel in Detroit for two days of learning and networking. Sponsored by companies like Vykon by Tridium, Honeywell, Johnson Controls Inc., Distech Controls, and more, the conference also had an exhibit hall to showcase the latest products and services available to contractors. 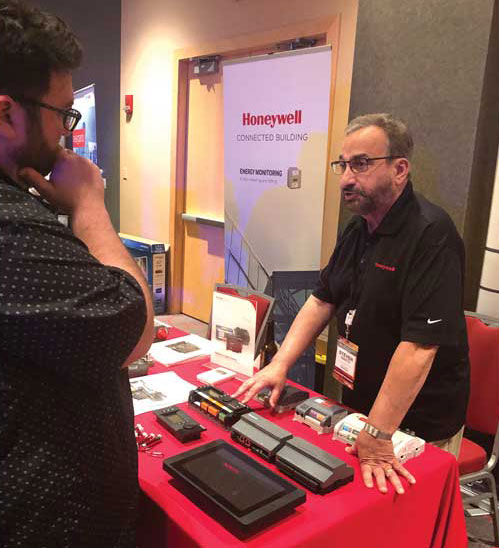 ON DISPLAY: An exhibit hall full of vendors, like Honeywell Connected Building, showcased new products and technologies throughout the event.

There are changes ahead in regard to smart buildings, and understanding key terminology was a large part of the general session kickoff led by Cochrane. The IoT is a broad topic that he won’t endeavor to define except for in buildings, he said. He also pointed out that in this world of IoT, contractors have to change how they install projects.

“We have developed a new methodology that we’re constantly trying to educate folks about — the operational technology [OT] network,” said Cochrane. “An OT network is simply an IP network that is set up for the services that help manage a building. They are built for comfort, safety, and security systems.”

IP networks, on the other hand, are built to run business systems, manage data, store information, etc. According to Cochrane, it is this difference in network type and usage that is pushing the industry toward running its own IP networks and then setting up OT networks with the necessary servers and infrastructure. During this process, security and protection from other IP structures become necessary. 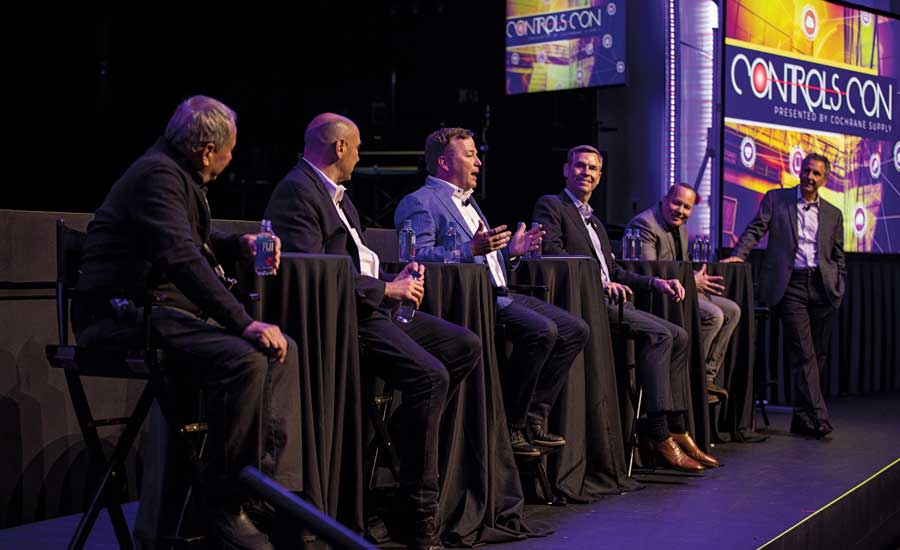 DISCUSSION PANEL: The keynote speakers took questions from the audience at the conclusion of the general session.

Cochrane further explained that those dealing with building management and controls in the future have three key pieces of architecture to consider — digitized systems, IoT, and occupant experience. The first component creates autonomous digital control of safety, security, and comfort in buildings. The second connects the digitized systems to the internet. The third — occupant experience — is what Cochrane calls the new piece of the puzzle.

“We’re just now starting to add to how we control the building because, for the first time, we can garner from the occupants who they are, where they are, and what they’re doing within a building,” he explained. “With this new information, we can start to have the building react according to the way people are operating within it, and as we start to perform these new capabilities, we are no longer just affecting energy management.”

The cost of building management can prove to be expensive, and customers often demand a return on investment (ROI) calculation from contractors. Understanding that the initial focus of contractors is energy payback, Cochrane and other speakers talked about the need to redefine ROI going forward. 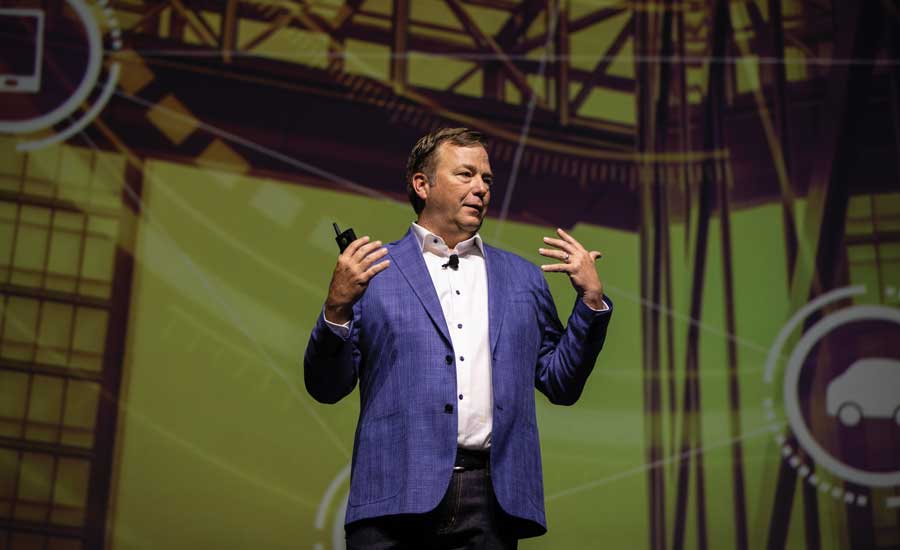 CENTER STAGE: Scott Cochrane, president and CEO of Cochrane Supply and Engineering, kicked off the recordbreaking event and led the general session.

“What if instead of focusing on energy, we were focusing on how we are going to make that business department 50 percent more efficient by using the new technology at hand?” he asked. “If you look at the relationship between the building applications and the building occupants, we’re going to start to see a new world where the occupant can start to gauge the building, not just based on the basic services that we are supposed to offer, but now we can start to actually add that cool factor to the buildings.”

As his address continued, Cochrane demonstrated several products that provide frictionless access to secure building sectors, and an app that maps the inside of the building. That same app was also used to bring up a list of conference rooms, show where other co-workers were, schedule a meeting, book the conference room, invite attendees, request any necessary technology, and program the appropriate temperature set point for that time frame.

“We spend 90 percent of our time inside,” said Laurent Vernerey, president of the Acuity Brands Technology Group. “We know how to control what’s happening in the building, but we don’t know really what’s going on or how to make a difference. We begin to see the evolution from building performance to business performance.”

Vernerey, another keynote speaker, not only further explored the topic of building performance evolution, but he also asked attendees and contractors to question themselves about the future of their own businesses.

“Are you getting future-ready?” he asked. “How are you ready? How are we as an industry ready to take 30 percent less time on every job? Are you ready to leverage technology to grow your business?”

Driven primarily by a generation that wants to interact with everything through a smartphone or an app, the building environment is not only changing in technology, it is also yielding an incredible amount of data. This data can be leveraged to learn about the building and its occupants’ behavior. Combing through the data and keeping it secure, however, are two challenges that HVAC technicians will face.

Two key terms — data and metadata — are emerging in building control and technology. Data, for example, could be a temperature point, say 85°F. Any information collected around that temperature point is metadata: It was 8 a.m. in the main conference room, and there were two occupants at that time.

“All of you should be considering what the data looks like that you’re leaving behind,” Cochrane said. “Think of it as your artist’s signature of your job going forward. You’re the data architect, and what you leave behind talks to the quality of the product that you’re leaving.”

According to him, Cochrane Supply is seeing more and more end users choose contractors who respect the data integrity and make sure that the owners’ needs are met with it.

In the evening, there were multiple awards presented as the attendees enjoyed dinner and further discussed the day’s events. 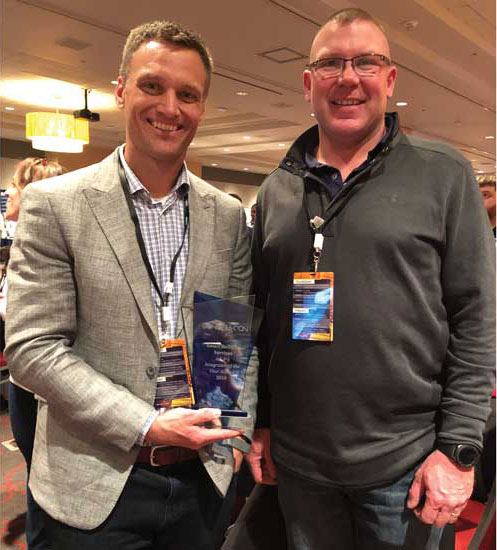 The next morning, after breakfast and another opportunity to visit the exhibit halls, attendees broke off into two sessions. One focused on the specifics of the new technology, and the other focused on how to apply the technology from a business standpoint. The conference ended with lunch and a final visit to the exhibit hall.

The Future of Building Solutions

Jim Young is the founder of the Realcomm Conference Group that produces Realcomm, IBcon, and CoRE Tech. He addressed attendees of Controls-Con 2019 and encouraged them to seek partnerships and work together in order to accomplish what the built environment will be expecting from the contractors of the future. Here are some trends and observations Young made and shared: