Research Indicates U.S. Is Due to Embrace Portable Cooling

Portable cooling has been around since the 1980s, as the guys at Spot Coolers tell it, and among the first customers for the equipment in the U.S. were professional football teams.

Uses in this country have spread far and wide since then, creating comfort for people at home or at work (albeit usually not in front of a national television audience). Contractors who understand some of the less obvious applications so far might find an opportunity to make a valuable recommendation to a customer at some point down the road.

Before getting creative with nonresidential possibilities, though, take a quick tour around recent developments and forecasts for the equipment and popular thinking regarding its more common application.

FMI predicts that North America is “the next key market for penetration of portable air conditioners.” That opportunity is surprisingly also expected to come with a decreasing rate of revenue growth domestically. FMI believes this is due to a wide variety of options at increasingly affordable price points, and comparatively speaking, due to an even stronger embrace of the equipment by Asian consumers.

Research firm Future Market Insights (FMI) investigated the state of the global portable cooling market, finding that it neared a total of $1 billion in 2018. Although it may not be the case in the U.S., FMI reported that residential end users make up the vast majority (upwards of 80 percent) of that market globally.

The equipment is exceptionally popular in Asia, which holds a market share over 40 percent, according to the study.

However, FMI predicts that North America is “the next key market for penetration of portable air conditioners.” That opportunity is surprisingly also expected to come with a decreasing rate of revenue growth domestically. FMI believes this is due to a wide variety of options at increasingly affordable price points, and comparatively speaking, due to an even stronger embrace of the equipment by Asian consumers.

On the good side, the advent of the air conditioner/dehumidifier combo unit has spurred portable cooling sales recently. FMI sees building on that with more new features and improved energy efficiency as keys to fostering overall growth in the market.

The team at Friedrich Air Conditioning Co. (who wished to be quoted for this article collectively, using the company name) has been a part of the dehumidification development that FMI noted. The manufacturer’s ZoneAire is a dual-hose portable model. The company relayed that it is available as either a three-in-one system (air conditioner, dehumidifier, and fan) or a four-in-one that also includes heating capabilities.

In terms of other features, the manufacturer touts snap-in hoses for faster startup, a three-speed fan, 24-hour timer, and washable antimicrobial filters.

Of course, more modern bells and whistles must still build on a solid foundation. Wally Meissner, Charlie Knight, and Corey West are area managers in the Spot Coolers organization. Speaking as a team for this article, they see temperature cooling, flexibility, and response times as “key factors that define a good machine.”

Spot Coolers has also seen a more recent opportunity for portable cooling grow out of the wider interest in smart building and LEED certification among tenants and occupants.

In addition to increased efficiency from central units, another way to meet demands for reduced usage (and reduced costs that come with it) comes from simply narrowing the amount of space conditioned when that is practical. In that scenario, the Spot Coolers trio has seen portable cooling become a more popular option.

Elsewhere in office or commercial building circumstances, Friedrich pointed out that portable equipment can represent a fine fit when an office space’s use has changed, such as when a new use involves considerably more occupancy, either in number of people or time occupied. The company relayed that contractors will use their PAC units for effective stopgap cooling while a central cooling system is under repair.

Spot Coolers echoed that cooling for planned or emergency shutdowns, along with supplemental/off-shift/weekend cooling remain frequent uses for its equipment.

In terms of going beyond the old definition of portable cooler, the BioKool incorporates a four-point process designed to disinfect while it cools. A 4-inch HEPA filter, a dual condenser, and internal UV-C lights that treat the evaporator chamber (including coil) and internal surfaces all contribute to the cooling-plus-IAQ objective. 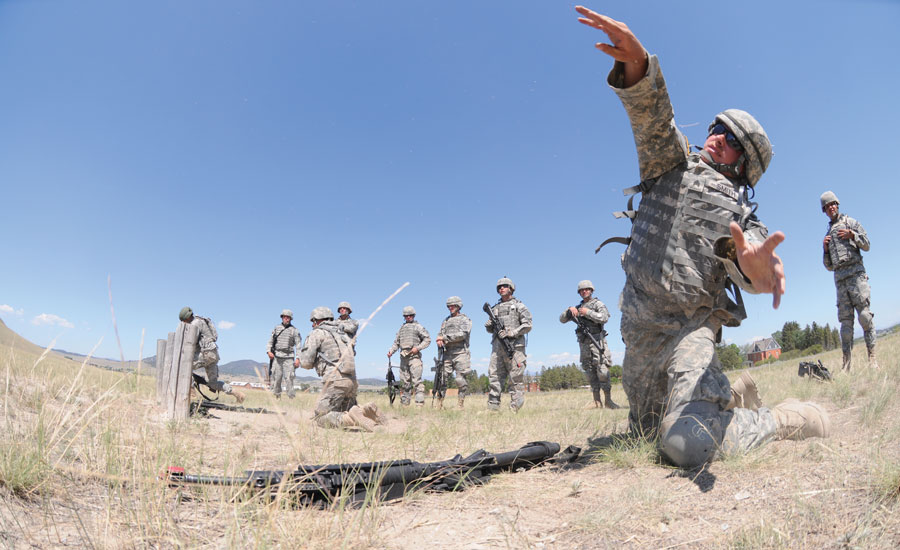 HOT DAY AT WORK: According to Spot Coolers officials, portable cooling has found its way to cooling tents for soldiers working on their grenade-throwing skills.

Elsewhere around society on a daily basis, “turns out, you can also cut croutons faster, cool gel tabs quicker, and wrap cupcakes faster when you put a Spot Coolers or two at the end of your line … so you can run the line faster, make more quicker,” according to the Spot Coolers team.

Portable HVAC enjoys a somewhat unusual space in the market. It might be used as a rental, or as a purchase that moves from location to location, or a customer might select a portable unit to work in a permanent location.

Movincool and OceanAire are two brands that offer machines that have been “mounted into plenum spaces, suspended from ceilings, and even deployed under stages,” report the Spot Coolers contacts, adding that many have stayed in service for 10 or 15 years. For something completely different, the equipment has also been used in tents functioning as cooling stations for soldiers conducting hand grenade practice.

Contractors and users can find plenty of opportunities, old and new, where portable cooling might improve customer satisfaction or help out in a bind. But as Friedrich pointed out, efforts in things like improved equipment or easier maintenance are not enough in today’s consumer environment.

The “Amazon effect” heightens the public’s expectations of not only what can be done but when it can be provided. In a way, that plays into the nature of portable cooling, if contractors and manufacturers are up to the challenge.

“The business starts with quality products,” the Friedrich team commented, “and turns on quality service.”