“The industry is at a crossroads, facing a major redesign ahead of the 2023 regulations and refrigerant transition.”

Indeed, ongoing refrigerant developments and efficiency regulations have the attention of many in the compressor industry. More perennial factors like customer feedback, contractor ease of use, and technical advancements haven’t gone anywhere, either. All together, these forces exert considerable pressure these days on the compressor industry. However, a few industry professionals give the impression that this unusually dynamic moment may be producing the best options yet for contractors and end users.

About those customers: Angle confirmed that homeowners do want premium comfort at affordable price points. But as with HVAC in general, homeowners are becoming more knowledgeable and also more attuned to long-range opportunities.

“Customers are finding that replacing an older, although functioning, system with a newer, more efficient unit can provide an acceptable ROI [return on investment] through the reduced electric and gas bills,” said Scott Riegel, manager of the Trane Residential component engineering group.

Meanwhile, in various rooms far away from the average homeowner’s HVAC system, politicians and others continue to work their way through a jungle of refrigerant options, attributes, and challenges.

Each manufacturer deals with this protracted uncertainty a little differently.

Many states face the HFC refrigerant phasedown and review others with low GWP. In light of that, Danfoss is working with stakeholders to prepare and future-proof equipment, as well as update the qualification of its compressors for usage with low-GWP gases, said Fernando Del Moral, Danfoss’ head of marketing, North America and Latin America – Commercial Compressors. 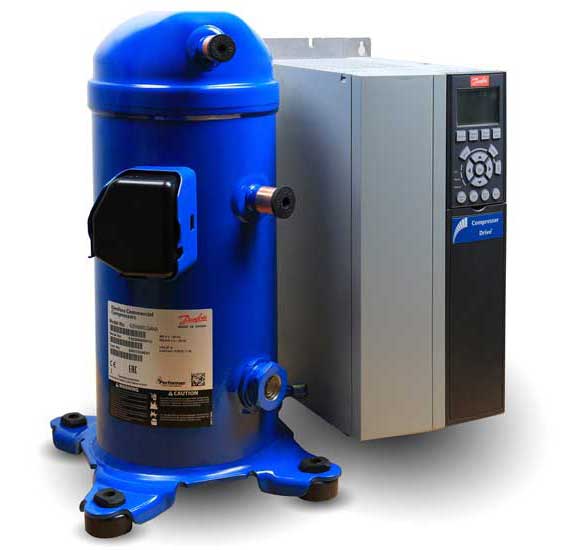 FUTURE-PROOFING: Danfoss sees the expanded VZH line as a way for OEMs to get out ahead of coming regulations, including demanding Ecodesign Lot 21 targets taking effect in 2021.

His colleague Eddie Rodriguez, strategic marketing director at Danfoss Turbocor® Compressors, assured that Turbocor compressors will see an expanded capacity offering as a result of that future-proofing effort, using low-GWP refrigerants such as HFO-1234ze.

With many companies committed to reducing the presence and impact of HFCs by next year, Trane is keeping an eye on R-22, according to Gregory Wilson, compressor product manager for Trane Parts and Supply.

“In 2017, when R-22 was expensive, we experienced a shift in contractor buying behavior [toward R-22 alternatives],” he recalled.

With the price easing last year, he has seen contractor buying revert to more traditional patterns.

Bicknell pointed out that in those cases, the system will have different operating conditions. Compressor oils might need to change, as the refrigerants must be compatible both with the compressor and other components. But he expressed certainty that extensive testing before any such change would assure an essentially indistinguishable experience for Trane customers.

“Due to the increase in partload efficiency with these new standards, modulated technologies such as two stage, variable speed, and multiples are expected to increase in adoption.”
— Shane Angle vice president, sales and technical services, air conditioning Emerson’s Commercial and Residential Solutions platform

At Emerson, the team is focused on optimizing scroll compressors with new technology for the low-GWP refrigerants. According to Angle, Emerson experts are participating in sessions with regulatory bodies, new codes/standards development, and committees to develop training for technicians ahead of new A2L refrigerants.

Further down the road, upgraded minimum efficiency standards go into effect in 2023. Riegel noted that new minimums rise to 15 SEER for residential units under 45,000 Btuh in the Southeast and Southwest.

“Due to the increase in part-load efficiency with these new standards, modulated technologies such as two stage, variable speed, and multiples are expected to increase in adoption,” Angle added.

He also pointed commercial customers toward the idea of connecting compressors via manifolds into tandem and trio configurations.

As for traditional technological advancements, they still happen, too.

This progress, teamed with increased motor and mechanical efficiencies, he said, is now producing “the highest overall compressor efficiency in our industry’s history.”

At Danfoss, Rodriguez pointed out that oil-free compressor technology has expanded its reach to meet longstanding market desires. Specifically, design advances enable it to serve high-lift situations like heat pumps, heat recovery, and air-cooled chillers in hot ambient climates. Thus those customers, he said, now have a valuable alternative when it comes to equipment technology.

“These advances include utilizing two stages of compression in a back-to-back orientation in order to balance the axial forces at high-lift operating conditions,” Rodriguez explained.

Beyond what he touted as simplified maintenance and lower operating costs of oil-free compressors, Rodriguez pointed to a quieter experience, with sound levels up to 8 dBA lower.

Quieter performance is a bigger deal in some places than one might think. Anyone who drives through an old neighborhood and then a new neighborhood will notice: The houses are a lot closer together than they were a few decades ago. Zero lot line areas, driven by limited real estate or developer desires to maximize profit or both, has in turn raised the profile of equipment noise as a concern.

Bicknell observed that with no required setbacks in some areas, the low decibel limits set by some city codes require that builders and homeowners seek out ultra-quiet systems.

He referred specifically to one city in the Northwest that limits noise to 55 dBA during the day and only 45 dBA between 10 p.m. and 7 a.m.

ONLY AS GOOD AS ITS INSTALLATION

Amid the flurry of upcoming changes and new obstacles, Angle circled the discussion back around to an uncontested truth.

“With the industry facing technician shortages,” he said, “contractors are looking for reliable technology that’s easy to apply and troubleshoot.”

He sees that, and the desire to minimize callbacks, contributing to a different trend.

“Compressor electronics with fault detection and diagnostics can assist technicians with troubleshooting and maintenance, helping them to be more productive,” Angle said. “The future of simple, standard diagnostics not only supports contractors in the field but gives homeowners and business owners peace of mind.”

Elsewhere in the day-to-day repair universe, Wilson said he experiences contractors who are looking for scroll replacements that require minimal field modifications.

He has seen hesitation among many to do re-piping, given the additional time and effort required of an already stretched talent base.

As for compressors themselves, Bicknell wrapped up recent efforts and the potential for future progress in some context.

“It’s about more than one component,” he said. “It’s about being smarter as a system to give customers what they want and make dealers’ lives easier.”

Products of Their Environments

Having discussed the array of regulations and other demands swirling around compressor development today, it’s worth a look at what these companies have on the market right now to address these circumstances. 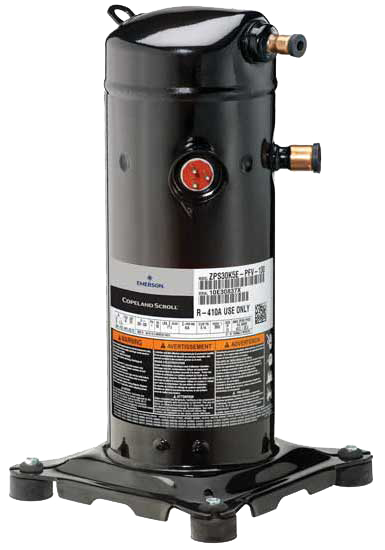 The latest generation of Copeland Scroll two-stage compressors from 1 to 10 tons features third-generation technology optimized for mid-tier comfort and efficiency rebates, with improved full-load and part-load performance up to 5 percent.

The two-stage compressor runs at full capacity or approximately 65 percent, which helps keep humidity at bay while reducing energy use. Internal bypass ports enable the compressor to run at approximately 65 percent capacity during times when only part-load heating or cooling is needed. When demand increases, the modulation control valve is activated, sealing the bypass and instantly shifting capacity to 100 percent.

Danfoss has added new 8.5- and 11-ton variable-speed compressors with intermediate discharge valves to its VZH range, expanding the variety of choices the company offers to commercial cooling manufacturers for variable-speed scrolls with qualified drives.

Likewise, for chillers, Danfoss stated that its VZH range will enable OEMs to develop a competitive range of systems capable of exceeding the demanding Ecodesign Lot 21 targets coming into effect in 2021.

Trane described the XV19 variable-speed unit as its quietest and most energy-efficient heat pump. The low-profile heat pump’s variable-speed system is built to work under stringent noise requirements, with sound levels of 43 to 57 dBA. This feature also makes the XV19 a good candidate for outdoor living spaces, condos, hotels, and restaurants, according to the company.

The XV19 offers a SEER rating of up to 19.5 and HSPF of up to 12. The variable-speed compressor, outdoor fan, and indoor fan vary operating speed and Btu as the temperature outside changes, slowing down or speeding up gradually in as little as .1 percent increments to keep comfort within .5° of the thermostat setting.