When patients visit doctors, their medical records are kept confidential — by law. And when medical data is used to study what levels of chemicals and emissions are safe for humans, the information it’s based on is kept confidential, too. But when taxpayer dollars are spent to create regulations based on information the public isn’t allowed to access, some in the HVAC industry call foul.

“The ‘secret science’ we in the HVACR and water heating industry have been dealing with is the Department of Energy’s (DOE’s) recent habit of justifying efficiency rulemakings on analyses only it has access to,” said Francis Dietz, vice president of public affairs at the Air-Conditioning, Heating, and Refrigeration Institute (AHRI). “We believe that such analyses, generally performed by firms under contract to the department, should be open to all stakeholders so as to enable replication and to clearly show the validity of the proposed rule’s justification.”

But that’s not what’s happening, Dietz said. Instead, taxpayer dollars are spent on economic models that are developed by DOE contractors.

“But DOE refuses to allow stakeholders access to the publicly funded models to double-check the work or question its assumptions,” he added.

The issue with HVAC secret science centers around lab-tested efficiency of equipment versus realized efficiency: whether the systems being tested are actually capable of performing in real-life scenarios at the standards that the closed-door tests say they are.

Lab-rated efficiencies use an average range of conditions — temperature, pressure, humidity — that are typical for a given product, Dietz explained. Every piece of equipment is tested to those same ranges.

“That way, we know how each compares to their competitors,” he said. “To use an analogy, it would be a little unfair for me to say I’m faster than you are when you ran a one-mile race up a mountain, and I ran the same race down the mountain. Of course my time is going to be better. The lab conditions are the equalizing factor when we are trying to make efficiency comparisons on an apples-to-apples basis.”

Customized results per home or building are a luxury at best, he continued, and they are economically impractical on a large scale.

“Realized efficiencies, while good in theory, would require someone going to a house to take measurements,” Dietz said. “And the overall efficiency of a/c and heating depends on multiple factors, including the tested efficiency of the equipment, but also external factors such as ductwork, insulation, roofing, and windows — which are going to be different for every location and are not easily measured.”

It could be possible for the DOE to do a retrospective study to adjust its energy-saving models by looking at utility information to see how much energy was saved, or using a given time period or a given location after the implementation of a new regulation, he added.

While the lab tests of HVAC systems are funded by taxpayer dollars, the raw data behind the testing is not always available to the public. That’s in part because studies that use patient medical records, which can be key in linking public health and the environment, must be kept confidential under the law.

For Dietz, not having access to the raw data is cause for concern because of “the very real possibility that manufacturers are precluded from offering equipment to consumers that would be more economical for them, because of a flawed economic or technical analysis.”

“For far too long, [since before] the Obama administration, agencies have been coming up with their own metrics to justify what they want to do,” James said, speaking from experience with his work, prior to joining ACCA, on a federal rule called Waters of the United States. “People do their political bidding. We see that a lot at EPA [Environmental Protection Agency] in terms of energy efficiency. You hear us talk about quality installation — we’ve been screwing consumers for a long time, [and they’re] not getting what they thought.”

“It should be about what the consumer’s getting,” he said. “That’s been our main focus here, so it puts the spotlight on the contractor. It should make them understand that they’re important. The products they’re designing, installing, and servicing, represent the largest consumer of energy in the entire country.”

A MATTER OF RECORD

HVAC industry organizations like ACCA and AHRI want the feds to shift the focus of the regulations from one data set to the other and provide access to the scientific research that the regulations are based on. 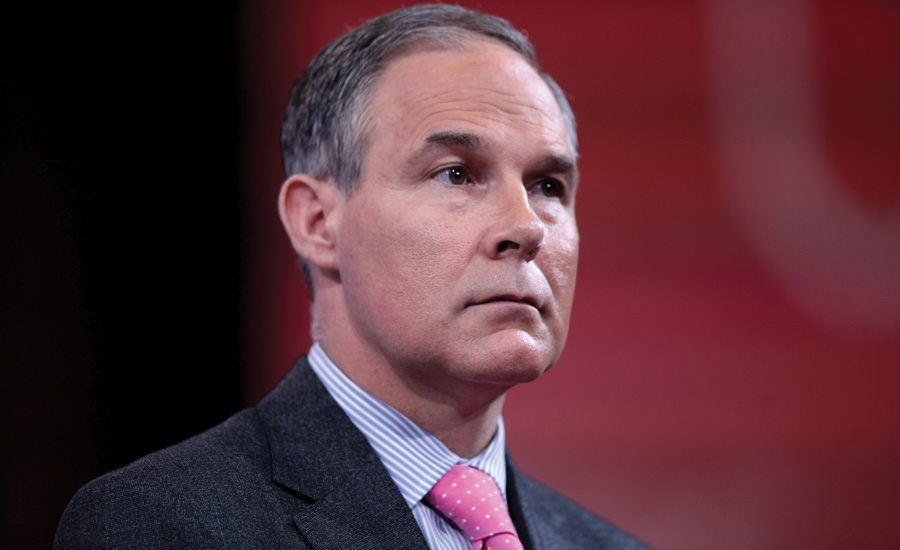 HERE IT IS: When in office, Scott Pruitt directed his agency to make every bit of data available to everyone. Photo Courtesy of flickr

“Consumers should have access to that information, and more importantly, so should Capitol Hill,” James said.

Back in January 2017, ACCA and the entire HVACR Alliance united to bring the issue of utilizing consensus standards to the attention of the administration.

“A big part of that ties right into this here,” James said. “What EPA or DOE are following is all the stuff we make available and point to, but then what they do is they get in their groups and use their own stuff. What [former] EPA Administrator Scott Pruitt has done is, he’s directed his agency to make every bit of data available to everyone. Everything they’re using to justify the changes they want to make will be made available.”

The proposed Strengthening Transparency in Regulatory Science rule, put forward under Pruitt, would limit the types of research that the EPA could use in creating new environmental regulations, allowing only studies where the raw data is made public. James called it a “very positive direction, from a business standpoint,” chalking it up to “new leaders in town” with different political beliefs than the former administration.

“This kind of openness goes a long way toward mitigating the potential negative effects of agency rules being based on data that not even the scientists at the agency have seen. The public, including scientists, should have the opportunity to evaluate the agency’s data and independently determine whether the data supports the EPA’s conclusions. Now, they will rightfully have this opportunity.”
—Rep. Lamar Smith (R-Texas) chair of the House Committee on Science, Space, and Technology

“We’ve got at least two years left of our president’s term, and Andrew [Wheeler, EPA administrator,] certainly shares these feelings. He will pick the mantle up and maybe even have a stronger position on it. What we would like to see is this spread — to make things a more open process.”

Rep. Lamar Smith (R-Texas), chair of the House Committee on Science, Space, and Technology, said the open data rule would represent a shift from secret science to open science at the EPA.

“Pruitt’s recently announced open data rule advances the principle that our government should be honest with the American people, and it recognizes that our citizens have a right to see the data that the EPA says justifies its regulations,” he said in a statement to The NEWS. “This kind of openness goes a long way toward mitigating the potential negative effects of agency rules being based on data that not even the scientists at the agency have seen. The public, including scientists, should have the opportunity to evaluate the agency’s data and independently determine whether the data supports the EPA’s conclusions. Now, they will rightfully have this opportunity.”

James said he believes environmental groups are in support of secret science.

“Their misguided beliefs are doing a disservice for consumers year after year, and I think we can finally push back on them,” he said. “If they’re not using science, they’re using emotion and the leanings of people working in these positions to leverage their desired outcome. We could see that change. We could actually see consumers have their own choice and understand what they’re buying in terms of products. It will make true science — the facts — start to matter more.”

Critics of the proposed rule argue it would lead to greater reliance on industry-produced studies that appear to show certain chemicals or emissions as having little harmful side effects to human health or the environment — the way the tobacco industry did in days gone by.  Last June, 103 lawmakers opposed to the rule signed a letter to Pruitt.

The letter stated that “contrary to its name, the proposed rule would implement an opaque process, allowing EPA to selectively suppress scientific evidence without accountability and, in the process, undermine bedrock environmental laws.”

The rule is currently in the official review process, and a date or deadline for finalization has not been set.

Of course, if a system isn’t properly installed, it’s not going to deliver the efficiencies it promises, regardless of what any type of science, secret or otherwise, claims it will do.

For his part, Todd Washam, director of industry relations, ACCA, wants the DOE to step up its accountability measures. He’d like to see more funding for the Energy Star verified installing program, not only to encourage contractors to join, but to make consumers more aware of that idea so they can push contractors from their end.

“Part of what needs to be done is DOE needs to use their base energy program funding — grant programs — to require states to talk about this issue to consumers and to make sure that any rebates, any government-funded home energy programs, be required to have a quality installation done on their HVAC system,” Washam said. “Consumers have a right to know if their Energy Star systems are going to be installed correctly. Failure to do so does disservice to the Energy Star brand.”

Washam said Congress needs to include accountability for proper installation in discussions about reforming the Energy Policy and Conservation Act.

“If they’re going to be talking about reforming energy efficiency standards, then they need to put in a recognition that HVAC systems need to be installed correctly,” he said. “Before we know it, we’re going to have flammable refrigerants in homes and businesses. So the fact that we know 50 percent of the installations are not up to manufacturers’ standards ... we’re all accountable for that. It’s not acceptable.”

Washam said the problem is “complete lack of awareness.”

“Other than the work that we’re doing here [at ACCA], no one’s talked about this,” he said. “We need ... that spotlight to happen. What’s the point in regulating a consumer to pay the price for a 14-SEER unit if we know they’re only getting 10 SEER?”