It seems that everyone wants to know more about what’s going on with the state of refrigerants in the U.S. Nowhere was that more evident than at the recent AHR Expo held in Atlanta, where various HVACR industry groups and manufacturers hosted information sessions regarding refrigerant alternatives and regulations.

In most of these sessions — as well as on the show floor — the same questions arose: Will the federal government regulate the use of HFCs this year, either through ratifying the Kigali Amendment or by creating separate legislation? Or, will that be left to individual states such as California and New York? What refrigerant(s) will take the place of HFCs in refrigeration and air conditioning equipment?

Unfortunately, there were no easy answers to these questions.

“The phaseout of R-123 and R-22 is almost completed in developed countries, and per the Kigali Amendment, low-GWP alternatives to R-134a and R-410A are desired,” said de Larminat. “That’s why we need to find alternatives to all of the fluids traditionally used in air conditioning. As we know, it’s not an easy task, because there are tradeoffs between flammability, GWP, energy efficiency, and cost.” 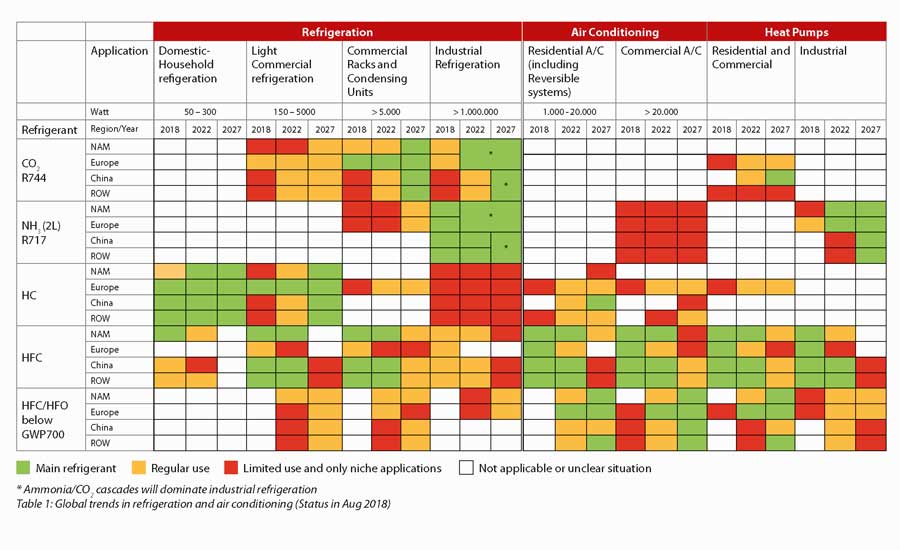 REFRIGERANT PROJECTIONS: In this chart, Danfoss outlines what it believes the global refrigerant market will look like over the next decade.

That leaves blends, which, for R-22, could mean using a combination of:

So how do you compare the performance of blends with pure compounds such as R-22 and R-410A? That can be challenging, noted de Larminat, because with pure compounds, their operating characteristics, such as subcooling, superheat, condensing temperature, etc., are well-known and easily measured.

“With a blend, due to its variable composition, it can become very highly sensitive to some design features of the system,” he said.

For example, where and when should measurements be taken (e.g., high side, low side)? Is the same unit being tested under the same conditions (e.g., airflow, temperature, heat transfer), particularly in retrofit situations?

With no definitive test available to compare the performance of blends to R-22 and R-410A, de Larminat devised his own. His methodology included using data from various organizations, including Air-Conditioning, Heating and Refrigeration Institute (AHRI), whose test data showed that except for R-32, all the alternatives to R-410A have slightly lower capacity, but in the optimum configuration, they all have better efficiency than R-410A.

“With R-22, it’s the opposite, so some fluids have higher capacity, but nearly all of them do not match the efficiency of R-22,” said de Larminat. “Some might be amazed to see that R-290 has a lower calculated COP than R-22.”

By using this data as a starting point, de Larminat was able to analyze the cycle efficiency of blends to account for variations in system configurations, provide comparisons between R-22 and R-410A, and show how to measure and correct COP from test data when needed.

“The tests showed that blends are highly sensitive to system configuration and that, unfortunately, nothing easily matches the COP of R-22,” he said. “Of course, caution should be used, as there is no such thing as an actual test, which is why making apple-to-apple comparisons from testing is not an easy task.”

At Danfoss’ 24th annual press conference at the AHR Expo, John Galyen, president of North America, Danfoss, noted that it’s an interesting and dynamic time, because refrigerants for various applications are moving at different paces around the world. He predicts that there will be a lot more refrigerants to come, many of which will be mildly flammable or flammable. 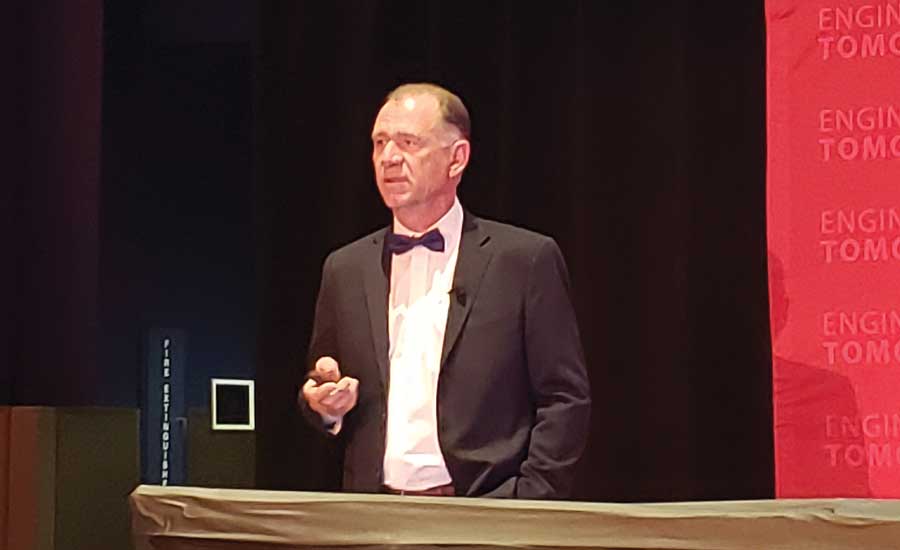 DYNAMIC TIMES: At Danfoss’ annual press conference, the company’s president of North America, John Galyen, noted that it’s an interesting and dynamic time as far as refrigerants are concerned.

“That will be a substantial challenge for us, for our industry, and for our OEM customers,” he said. “Contractors especially may find it to be a real nightmare. Not only are they burdened with requirements to service legacy equipment, they will need to learn about all the new refrigerants that are coming into the marketplace.”

The industry will also have to contend with the patchwork of refrigerant regulations that is occurring as cities and states pass their own laws regarding the phaseout of HFCs.

“We know that in 2018, the EPA [Environmental Protection Agency] and the DOE [Department of Energy] stood back a little from regulating our industry,” said Galyen. “Now we’re starting to see states like California, New York, and Maryland begin to regulate to meet the needs of their individual constituencies. Major cities are also working together to share their best practices and make significant commitments for change within their own cities. This patchwork of refrigerant regulations will pose an additional challenge and burden for our industry.”

Indeed, the U.S. Climate Alliance, a group of like-minded state governors who banded together after the president announced the U.S. pullout from the Paris Agreement, is also expected to make additional program announcements this year, added Mark Menzer, director of public affairs, Danfoss. Together, these states represent more than 40 percent of the U.S. population and GDP.

“In lieu of federal movement on an orderly phasedown of HFC refrigerants, action has moved to the states,” he said. “California has adopted EPA SNAP [Significant New Alternatives Policy] Rules 20 and 21, which are in force right now there for new equipment. This mostly affects refrigeration equipment.”

However, California went well beyond the federal program and also banned certain service refrigerants, Menzer said. For example, refrigerants with GWPs in excess of 1,500, such as R-404A, will not be able to be sold in California after 2022. R-410A is exempt from the ban, but there will be a ban on new R-410A equipment starting in 2023.

“California is moving pretty far pretty fast, but it is promising financial incentives for early adopters,” Menzer said. “Considering that much of the technology is new to California, contractors, and end users, it will likely help jumpstart the market.”

So, how do we avoid the cost and complexity involved with varying regulations? The answer, Menzer said, is a federal solution.

“Last year, a few senators took the initiative to introduce legislation that would give EPA the authority that the courts said they didn’t have,” he said. “It came too late in the session, but similar legislation is needed in this Congress. We think it’s important for our country and for our industry. The lack of a U.S. commitment in phasing out HFCs on the federal level also emboldens other countries like China.”

Another challenge facing the industry is the lack of code coverage for some of the new refrigerants, particularly those that are mildly flammable, said Menzer. Danfoss has been part of a $5 million research effort in the U.S. to understand the risks and safe handling of these new refrigerants, and this research informed the ASHRAE safety standard; however, the standard was not adopted into the most recent model code revision.

“One of our industry’s failings is that we have not been speaking with a unified voice, and the message has been confusing to the code community,” Menzer said. “We get another chance later this year with another model code, and we need to be aligned within our industry on our message about the future of these refrigerants. The industry needs to be one voice throughout the sectors.” 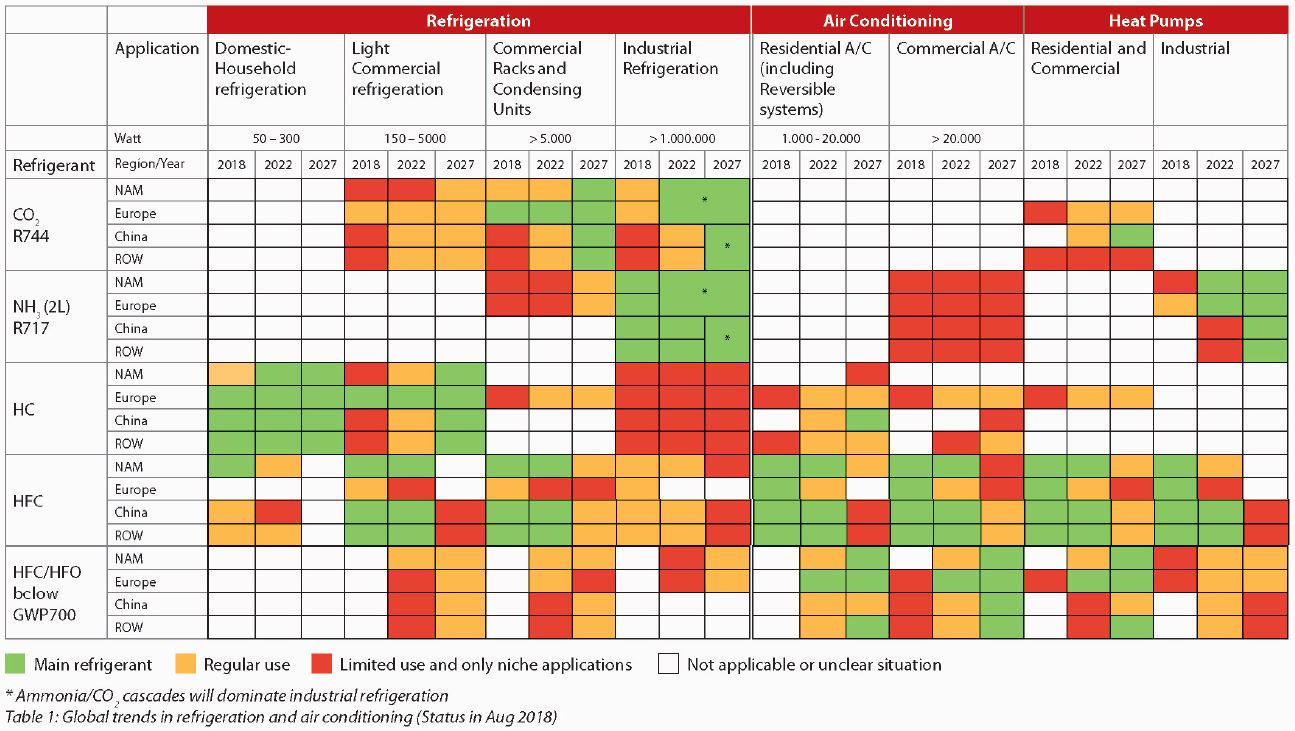 REFRIGERANT PROJECTIONS: In this chart, Danfoss outlines what it believes the global refrigerant market will look like over the next decade.