Wireless connectivity takes one step forward, so technicians can take two steps back

Location isn’t everything, but it helps. Just ask homeowners selling their property, or restaurant owners. In the HVAC world, it also rings true for some motors and drives and the professionals who work with them. That includes contractors, even if maybe not in the way that one would expect.

But back to the perks of the perch that drives enjoy.

“We not only have the ability to look at the thing the drive is controlling, but we also have a view of the power grid,” he said. “We see both sides of it coming together at the junction of the VFD, so it’s a unique location for sensing information.”

To that end, Hansen sees the next generation of drives offering the best opportunity yet to get data about both the grid performance and drive status. The resulting data is great, but these days, the challenge in buildings and life in general isn’t the ability to get data as much as it is the ability to manage, filter, and interpret the data to make an impact.

Hansen said his company understands that many customers’ reactions may be, “Great, but what am I going to do with all that data?”

“Variable-frequency drive (VFD) technology has a unique spot within system architecture. We not only have the ability to look at the thing the drive is controlling, but we also have a view of the power grid. We see both sides of it coming together at the junction of the VFD, so it’s a unique location for sensing information.”
—Mark Hansen
vice president of sales for HVACR - USA Danfoss

Danfoss is pursuing ways to help owners to make the most of it — including the ability to deal with incoming power issues like current spikes, unbalanced lines, and abnormal harmonic activity. The data management side of this involves finding ways to ease the pivot to the customer’s cloud or Danfoss’ cloud.

The contractor isn’t left out of this upside. Hansen pointed out that contractors can enjoy equal access for repair or outsourced operations and maintenance duties.

“[The contractor] may have a lot of history with the building and may manage the system,” Hansen said. “They can download information right off the drive to set parameters.”

They can also work with the owner to manage any warranty-related activities.

Hansen sees predictive maintenance as a big area where recent improvements can make a difference — how it’s running, types of stresses it’s seeing, and whether to repair or replace.

“Advanced troubleshooting will become a hot item as the control becomes more connected,” he predicted.

He sees the expanded ability for the manufacturer to see the system and its performance as opening a door for quicker and better factory support.

O’Brien pointed to another key for how some current and next-gen drives will make location matter in a new way: Contractors can spend more time further away from the equipment itself.

DON’T STAND SO CLOSE TO ME

The benefits of increased remote capability extend to remotely configuring a system, setting a schedule, or simply turning on/off a system. Learning about an occasional failure remotely and thus speeding up the necessary reaction is another plus, Hansen said. This trend applies to drives and also to the HVAC market in general, in O’Brien’s opinion.

While some of these abilities may be new for HVAC applications, the technologies supporting them may not be. Some of the industry has explored near-field communication, a wireless technology compatible with encryption that is used in other sectors. Bluetooth, another wireless option that connects devices without the need for internet availability, is more familiar to the average consumer, who now can even buy a Bluetooth-enabled toothbrush. 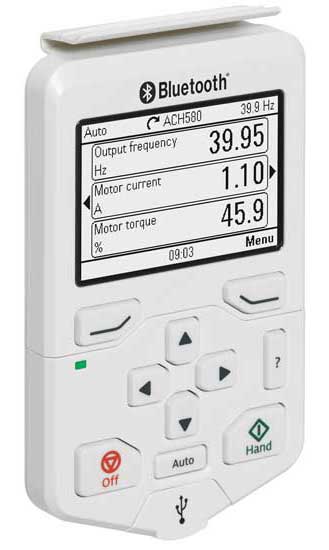 KEEP YOUR DISTANCE: Customers who use this optional Bluetooth panel for ACH580 drives and ABB’s Drivetune app can connect wirelessly to VFDs to execute any task an operator could accomplish by directly accessing the drive keypad with the help of descriptive names/passwords.

“It’s now possible to connect wirelessly to VFDs to execute any task an operator could accomplish by directly accessing the drive keypad,” he said.

In ABB’s case, its solution is a free app called Drivetune. With it, an operator pairs up a smartphone to the equipment through a set of initiation instructions. The drive must have a Bluetooth-enabled keypad, and that is an option for the ACH580 drives.

The convenience here can spill into improved safety when considering the equipment, power, and environments involved. And it’s not just for contractors anymore.

Once installed, Bluetooth provides the means to fully commission a VFD as well as to maintain it, Nyback said. In either scenario, this cuts down on the need to deal with work areas that are hazardous or hard to reach or both.

As an example, Nyback described how a commercial building might commonly have a full array of drives in a cabinet some distance away from the motors they control.

“With each VFD charged with 480 V of power, the potential for an arc flash is high when an operator opens the door to access the drive keypads,” he explained.

That’s where Bluetooth connectivity can eliminate a risk, and it also helps when drives are mounted in places like a loud room or high on a wall. Nyback said this method is far safer and easier than climbing a ladder, entering a high-decibel area, or walking to a far-flung location only to have forgotten the keys to the door.

Bluetooth isn’t the only method in this arena. Danfoss has incorporated Wi-Fi into its VLT® Wireless Communication Panel LCP 103. The unit is designed to let personnel access the VFD from up to 450 feet through open air and up to 100 feet through walls, via Danfoss’ MyDrive® Connect app.

Yaskawa America’s Shane King said that after years of occasional minor improvements in efficiency and energy savings, things are heating up considerably in this area. King is a building automation application engineer for the company, and he described the benefits of one area of progress: a true AC-to-AC drive. 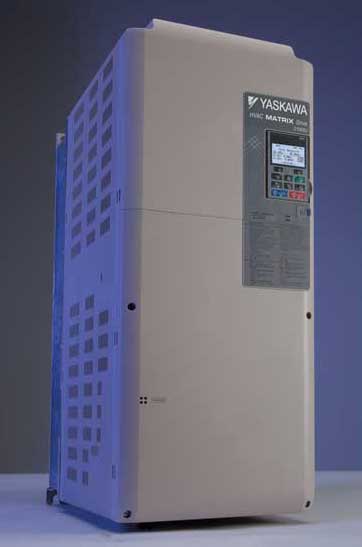 SKIPPING DC: How to make drives smaller and less expensive? Shane King of Yaskawa America Inc. points to products like the company’s Z1000U, which is “a true AC-to-AC drive,” circumventing the conversion to DC in an effort to nearly eliminate related harmonic line distortion.

“It does not convert the incoming line to a DC bus, making it almost invisible in terms of harmonic line distortion,” he said, adding that it also translates to smaller size and less cost.

As for contractor experience, King sees increased VFD interface options as resulting in a smoother and simpler experience for startup technicians and end users alike.

“We already have VFDs that can be programmed while still ‘in the box,’” King said.

The manufacturer is also among the ranks of those with VFDs that can be configured and programmed via Bluetooth.

Speaking of wireless connectivity, O’Brien observed that in his estimation, a lot of questions still exist around the data privacy and security of these connected systems.

That is true for components elsewhere in many HVAC systems, too. To use the series that Nyback discussed as an example, descriptive names and passcodes dedicated to each drive are used to ensure that parameters and loggers for each VFD are kept separate and are secure from unwanted access.

Danfoss’ LCP 103 panel uses WPA2 encryption and a selectable password to provide secure communications. So there are precautions and strategies; these concerns come with the territory when any industry shifts toward wireless access.

Customers are used to accepting the associated caveats for wireless personal use, but many have not yet been exposed to a workaround for certain up-close and potentially dangerous tasks associated with their job environments. The trade-off might seem more than acceptable for facilities and contractors as the opportunity arises to step back and sync up.