This website requires certain cookies to work and uses other cookies to help you have the best experience. By visiting this website, certain cookies have already been set, which you may delete and block. By closing this message or continuing to use our site, you agree to the use of cookies. Visit our updated privacy and cookie policy to learn more.
Home » From Its Business Structure to Its Refrigerants, Honeywell Makes Big Changes
HVAC Residential MarketRefrigerationResidential ControlsRefrigerantsThermostats

From Its Business Structure to Its Refrigerants, Honeywell Makes Big Changes

Resideo, the spinoff company, was just a few booths over

ATLANTA — From spin-offs to new refrigerants, Honeywell has made several changes to its business — some that were reflected at this year’s expo. One of the changes began in August of 2018, as the company announced the spinoff of Honeywell’s Homes and ADI Global Distribution business into Resideo Technologies Inc. The spinoff was completed three months later at the end of October, and Resideo shares became readily available on the New York Stock Exchange. Resideo is now authorized under a long-term, exclusive license to use the Honeywell Home brand.

Resideo Technologies was at the AHR Expo, in its own booth just a few aisles over from Honeywell. There, the company highlighted multiple products, including its new Honeywell Home T10 Pro Smart Thermostat. The device incorporates wireless sensors to provide temperature and humidity control in any room, at any time. The sensors offer up to a 200-foot range and communicate via Resideo’s RedLINK communication technology, which provides a robust wireless connection and reduces installation time for the contractor. 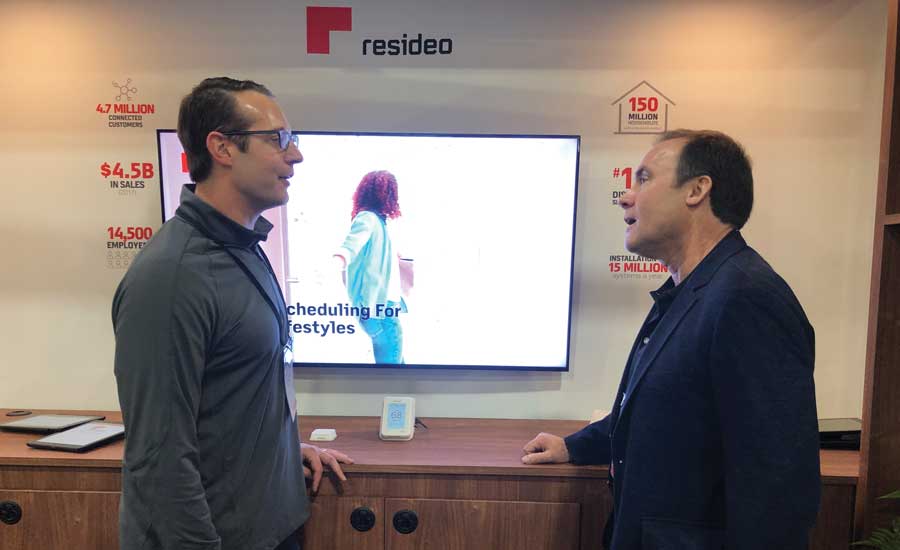 SPINOFF COMPLETE: Showing independently for the first time, Resideo Technologies Inc. is now authorized under a long-term, exclusive license to use the Honeywell Home brand.

The manufacturer announced in November 2018 that it is relocating its global headquarters from Morris Plains, New Jersey, to Charlotte, North Carolina. It will also relocate the headquarters of its Safety and Productivity Solutions (SPS) business group from Fort Mill, South Carolina, to Charlotte. As part of the move, about 150 to 200 New Jersey-based senior management positions and about 100 South Carolina-based positions will relocate to Charlotte between now and September. The company envisions gradually adding about 500 Honeywell corporate and SPS positions to the Charlotte location over the next five years, bringing total employment there to about 750 by the end of 2024. Approximately 1,000 Honeywell employees will remain in New Jersey across the company’s six locations in the state, including about 800 employees at Honeywell’s offices in Morris Plains.

In discussing refrigerants at the Honeywell booth, the company announced that Toshiba Carrier identified the potential of its new Solstice® N41 (R-466A) as an alternative to R-410A in residential and light commercial applications. George Koutsaftes, president, Honeywell Advanced Materials, said the company was excited about the announcement, noting that R-466A is a near drop-in refrigerant that emulates R-410A in capacity and efficiency.

“Solstice N41 is a nontoxic, nonflammable, A1 refrigerant that provides the best turnkey solution to meet the growing needs of the industry,” he said. “Solstice N41 offers better safety than A2L solutions; lower life cycle costs than R-32 or R-454B; and a low GWP of 733, which is 65 percent lower than R-410A. In addition, Solstice N41 implementation does not require changes to existing building codes, allowing for a quick and seamless adoption.”

Koutsaftes added that OEMs will be able to field test R-466A by the end of 2019.