This website requires certain cookies to work and uses other cookies to help you have the best experience. By visiting this website, certain cookies have already been set, which you may delete and block. By closing this message or continuing to use our site, you agree to the use of cookies. Visit our updated privacy and cookie policy to learn more.
Home » Finding HVAC Techs to Properly Diagnose TXVs Is Necessary but Problematic
Components & AccessoriesValves & Pumps

HVACR professionals discuss the importance of understanding how the system works

The basic components and function of a thermostatic expansion valve (TXV) continues to play a role in HVAC service.

“Long, long ago in a faraway place, TXVs had very little impact on service technicians because they seldom gave any problems,” said Carter Stanfield, who currently serves as lab assistant at Athens Technical College in Athens, Georgia, after retiring from full-time teaching. “The contaminated compressor issue, the switch to POE oils, and lack of nitrogen brazing have all combined to make TXV problems fairly common.”

Not only does Stanfield have over 40 years of experience in the industry, but as co-author of “Fundamentals of HVACR,” from Pearson, he literally wrote one of the books on the components and functions of modern HVAC systems. In one of its sections on TXVs, the book points out that “this component is widely used for nearly all types of air conditioning and refrigeration systems. The advantage of the TXV is its ability to automatically adjust to match the load, as it is designed to sense changes in the refrigeration load and respond to them.”

A member of the metering valve family — which includes the likes of capillary tubes, automatic expansion valves, and more — the TXV meters the refrigerant to the evaporator by using a thermal sensing element to monitor the superheat.

“The most important thing a technician needs to learn is how the system they are troubleshooting is supposed to operate,” said Stanfield. “Most troubleshooting is not really based on matching symptoms to causes but is based on understanding how everything is supposed to work and using a logical process to determine what is not working correctly. Technicians definitely need to recognize failed TXVs today.”

According to “Refrigeration and Air Conditioning Technology,” the Delmar Cengage Learning textbook written by Bill Whitman, Bill Johnson, John Tomczyk, and Eugene Silberstein, the TXV opens or closes in response to a thermal element and maintains a constant superheat in the evaporator. This is accomplished through the following structural elements of the TXV as described in the book. 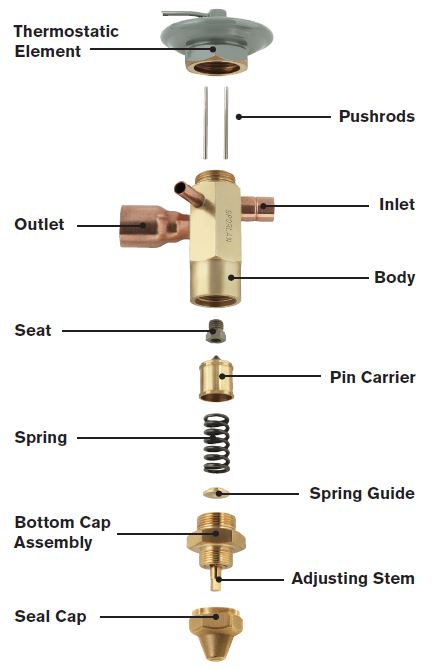 THEY’RE EVERYWHERE: The TXV is widely used for nearly all types of air conditioning and refrigeration sytems. PHOTO COURTESY OF PARKER/SPORLAN

Even with an understanding of the TXV’s primary function and components, the troubleshooting and maintenance of these devices remains a challenge to many technicians. Despite believing that TXVs should be used in most applications and that they are the most efficient metering devices, Randy Petit Sr., vice president of program development, HVAC Excellence, acknowledged that TXVs can be a challenge in the field.

“The largest problem is a lot of technicians do not understand the operation and, therefore, do not know how to properly adjust or troubleshoot the valves,” he explained. “To truly know if a TXV is operating properly, the suction pressure at the outlet of the evaporator coil must be known. With long or improperly sized suction lines, the technician must install a pressure test port on the outlet of the evaporator.”

According to Pettit, most technicians will not take the time to pump down a system to adjust the valve for required evaporator superheat. Another issue Petit has seen is that many technicians do not know where or how the thermostatic bulb should be installed.

“I feel most instructors do not have the time in their HVACR programs to teach or allow the students to retain the details of refrigeration and the electrical theory required to advance on their own,” he said.

As contractors look to hire new technicians and further train their current employees, properly diagnosing TXVs is becoming an in-demand and mandatory skill — one that contractors are finding to be problematic, according to Chuck Westenbarger, general manager, Wojo’s Heating & Air Conditioning Inc., Northwood, Ohio.

“Every HVAC student, installer, and technician should understand proper installation, evacuation, charging, and how doing it improperly causes damage to TXVs,” he said. “They should also know how it affects the overall operation of the system.”

Mike Hendrix, owner of HendrixAir LLC, Nahunta, Georgia, explained that diagnosing TXVs as the problem without properly checking airflow and other system diagnostics is an issue he sees with technicians.

“A TXV can be bad, and the system will appear to be operating properly,” he said. “Proper diagnostics is imperative.”

Brazing, in regard to TXVs, is another topic that contractors are addressing with their technicians.

“The valves are sensitive, and many don’t understand how to use a low purge of nitrogen in the brazing process to eliminate carbons that build up inside the pipe, causing potential restriction within the TXV,” said Ben Young, CEO of Hybrid Air Inc., Virginia Beach, Virginia. “Also, they are heat sensitive. You must keep them cool.”

His suggestion for every technician, whether student or veteran, was to use nitrogen while brazing and to use wet rags.

Facing multiple variables on a system, the TXV metering device provides a great service to air conditioning equipment along with some great challenges to the HVACR technician.

“The most common issue that technicians will come across with TXVs is that they are restricted or stuck because of the contamination,” said Stanfield. “The best solution is to replace the TXV and clean the system.”