For its second annual Refrigerant Week in September, Danfoss offered a number of refrigerant-oriented events, including live webinars on subjects ranging from global trends on refrigerants and regulations to how to minimize the refrigerant charge in an HVACR system. The week was capped off with an EnVisioneering Symposium, which focused on the changes taking place in the commercial refrigeration industry.

At the symposium, industry experts from Danfoss, refrigeration OEMs, end users, regulators, advocacy groups, and refrigerant producers came together to discuss some of the challenges facing the industry, as well as new technologies and megatrends that will impact every aspect of the commercial refrigeration market.

There have been a lot of changes recently in terms of the types of refrigerants that can be used in commercial refrigeration equipment. With the manufacture and import of new HCFCs being phased out at the end of next year and several states calling for a phasedown of HFCs in the near future, manufacturers and end users are expressing interest in so-called natural refrigerants such as CO2, propane, and ammonia. However, some contend that lagging codes and standards are posing a significant barrier to the adoption of these types of refrigerants.

“They will vote on allowing A3 refrigerants to have a charge of about 500 grams; A2 charge would be at about 2.2 or 2.4 kilograms, and A2Ls will be about 2.4 kilograms, depending on their molecular weight,” said Hon. “That would open up some new areas where it would be possible to install these pieces of equipment.”

If the revised standard is passed by the IEC this fall, the Europeans have indicated that they could adopt it as soon as January, noted Hon. In North America, it will take much longer to be adopted because the standard must go through a series of organizations that can each offer revisions. The first group on the list is the Regional Centre for North America (ReCNA), which would consider how the standard should be applied in North America. It takes about one to one-and-a-half years for ReCNA to confer and offer revisions, and if it adopts the new standard, it would become UL Standard 60335-2-89 and then be voted on in the U.S., Canada, and possibly Mexico.

After that, the new safety standard would be evaluated by the Environmental Protection Agency’s (EPA) Significant New Alternatives Policy (SNAP) program, which could take about six months in order to reach a decision on whether or not to increase the charge sizes in commercial equipment to meet the new UL standard. Only then can the changes be considered in national standards, which are created every three years.

“The best-case scenario for a new safety standard to be adopted is in the 2024 cycle,” said Hon.

Besides the slow standards process, there are several megatrends that will impact the commercial refrigeration industry — and particularly supermarkets — over the next few years. These include electrification, digitalization, and urbanization, said Peter Dee, sales and service director - North America, Danfoss. 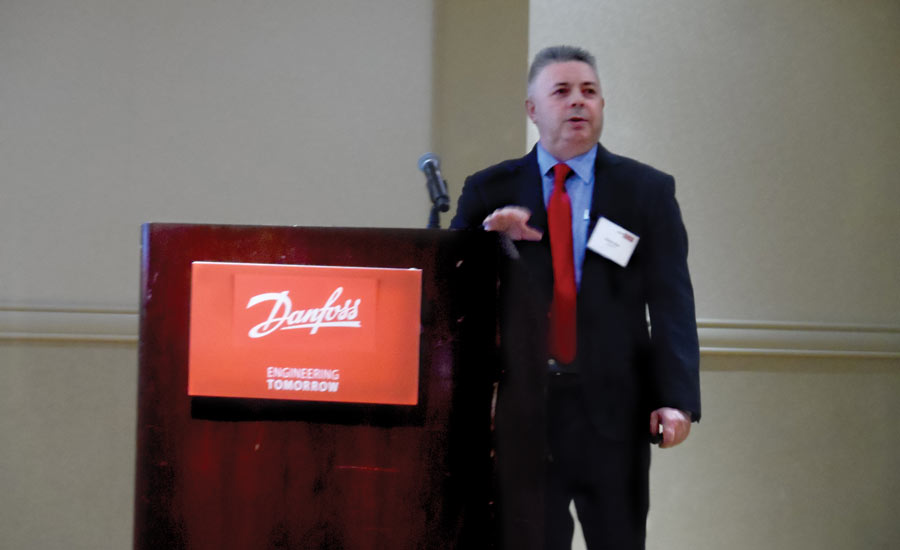 MEGATRENDS: Peter Dee from Danfoss talked about three megatrends that will impact the commercial refrigeration industry — electrification, digitalization, and urbanization.

As far as electrification is concerned, global demand for energy is rising as population grows and living standards increase. In the U.S. alone, electricity demand is expected to grow 29 percent by the year 2040, which is quite a strain on the grid, he said. Dee expects that newer, energy efficient technologies will help offset this greater demand for electricity in the future.

Digitalization is another megatrend, as the digital transformation of our society is continuing unabated. Dee shared the surprising statistics that 90 percent of all the data in the world today was created in just the past two years, and by 2020, approximately 26 billion objects will be linked together in the IoT.

The last megatrend is urbanization. Dee noted that by 2050, 70 percent of the population will be living in cities, which will increase the overall demand for energy. In fact, demand for space cooling in buildings is expected to grow 10 times by 2050.

“For food retailers, this means the store format likely will change,” said Dee. “How do you look at the store of the future? How do you see it going forward? There’s going to be a shift in the design of stores.”

Dee contends that to respond effectively to these megatrends will require the design of smart stores, which integrate all the controls and applications in the supermarket, including refrigeration, HVAC, and lighting in order to enhance food safety, reduce food loss, bring down energy costs, and optimize the store.

“It all comes down to data,” he said. “It’s connecting that data, so everything can work together to help the industry move forward.”

“We used to use distributed systems, but our standard design is now one low-temp direct expansion (DX) and one medium-temp glycol secondary central system,” said Burd. “I can’t speak highly enough of this design. The service is much simpler because you don’t have expansion valves in the cases, and it’s much easier to maintain. In addition, the adiabatic condensers have allowed us to lower our design condensing temperature and operate lower discharge and liquid temperatures. This has allowed smaller or fewer compressors, and consequently, lower energy consumption.”

Burd noted that 12 Weis stores currently use the glycol design, and those locations have proven to be less costly to service. In addition, they have lower kW usage than comparable stores, and their refrigerant charges have been reduced by about 65 percent.

Looking ahead, Burd sees opportunities with other technologies, too, noting that Weis Markets installed its first CO2 transcritical system earlier this year.

“The system has been operating since March, and it’s been performing better than we anticipated,” he said. “We have not had any hiccups, breakdowns, or anything. During one of the hottest days this summer, we found the kW usage was about 20 percent less for our CO2 store than the other stores. We feel that was significant.”

Indeed, Danfoss considers CO2 to be among the most well-suited refrigerants for food retail applications because it is one of the few non-toxic, nonflammable, environmentally benign refrigerants available, said Hans Ole Matthiesen, global segment director - food retail, Danfoss. He explained how CO2 systems have evolved from booster systems in 2007 to parallel compression systems in 2011 to gas ejector systems in 2017 to liquid ejector systems, which will be available later this year.

“We believe we have a system that is efficient,” said Matthiesen. “We need to make it simple. And we also need to think about training. We need to do a lot more on that front as an industry.”

Many of the end users at the symposium agreed that a larger trained technician base is necessary for the industry. However, that is not slowing their acceptance of new technologies, as many stores are already testing CO2 systems, and based on their comments, they seem to be pleased with the results so far.