This website requires certain cookies to work and uses other cookies to help you have the best experience. By visiting this website, certain cookies have already been set, which you may delete and block. By closing this message or continuing to use our site, you agree to the use of cookies. Visit our updated privacy and cookie policy to learn more.
Home » HVACR Contractors Not Spared From Opioid Crisis
HVAC Residential MarketHVAC Light Commercial MarketHVAC Commercial Market

Opiate addiction is spreading. Its barriers have moved past the streets as it invades the everyday life of average America. No longer focused on a strung-out junkie, the evolving face of opiate addiction now looks like a suburban soccer mom, a professional businessman, or even a highly-skilled HVACR technician. In an effort to push back against the rising drug epidemic, the President, Congress, and associations like ACCA are striking up a new conversation. Along with them are contractors ready to shed some light on what they face with the growing issue of opiate addiction.

Lanny Huffman is the president of Hickory Sheet Metal Co. Inc. in Hickory, North Carolina. The full-service mechanical contractor serving residential, commercial, and industrial customers in the Carolinas has been around since 1928. During his time as president, Huffman has seen many things, but what he experienced this summer took him by surprise.

It all started with a standard, random drug test requested by the safety manager: Six employees were randomly selected from all departments, and three of them tested positive for non-prescription opioids. SET MY JAW: According to Rep. Markwayne Mullin, R-Okla., patients are often prescribed 30 days or more of pain medication, and they can become addicted after just seven to 10 days.

“I was totally caught off guard,” said Huffman. “I was in shock of these results — frightened by the ‘what ifs?,’ disappointed by the decision of one employee not to get help, and angered by the fact that I was so naive to the drug abuse problem.”

The company does have a written drug policy in place. It outlines that any employee testing positive for any illegal or nonprescription drugs receives an automatic, five-day, unpaid suspension.

“If they choose not to attend the drug counseling program, the employee is terminated, and unfortunately, one employee chose not to attend the program,” Huffman said. “There is a bright spot in this: One of the employees that tested positive thanked me and is fully enrolled into a drug abuse counseling program. He knew he was addicted but didn’t know how to break free. I hope he will stay with it.”

This story is not isolated to one contractor. Across the nation, many HVACR contractors are experiencing the same problem, and it is affecting their ability to add to or maintain an already shrinking workforce. To protect their workforce, contractors are being warned to pay specific attention to the way they handle workplace injuries: Providing a way back to full duty after a workplace injury is proving to be one of the crucial components of a drug-free workplace.

“Painkillers are quite different than most drugs that are out there, and the individual that gets addicted to painkillers did so accidentally ... When someone is prescribed 30 days of prescription pain medicine that can be addictive after seven to 10 days ... their body becomes dependent on it. They go back to the doctor and he asks about their pain level, but many are not actually experiencing pain from the injury that took place, but as a result of withdrawal symptoms.”
— Rep. Markwayne Mullin, R-Okla.

During testimony in the congressional briefing — Opioids and Men in the Work Place: How are Drugs Affecting Men and Employment? What Is Different About Opioids? — Rep. Markwayne Mullin, R-Okla., explained that four out of five heroin users started using because of their prescriptions to opiates after an injury.

“Painkillers are quite different than most drugs that are out there, and the individual that gets addicted to painkillers did so accidentally,” Mullin said. “Someone that is taking heroin or meth, they’re taking a drug, and they know what they are taking. They know they are a drug addict. When someone is prescribed 30 days of prescription pain medicine that can be addictive after seven to 10 days, however, their body becomes dependent on it. They go back to the doctor and he asks about their pain level, but many are not actually experiencing pain from the injury that took place, but as a result of withdrawal symptoms. And now the individual accidentally becomes addicted to painkillers.”

Mullin went on to share some of his personal experiences with the effects of opioid choices that have been made by his friends and family. He and his wife raised his niece, who had an opiate issue in her family. His brother-in-law is serving a 15-year sentence in prison because he became addicted to painkillers that were left in a medicine cabinet when he was a teenager. A good friend’s father, who never drank or took drugs, went in for elective surgery, was prescribed painkillers, became addicted, and decide to end his life. As for Mullin himself, he chooses not to take opioid painkillers despite the fact that he has had four surgeries just this year.

“Most of you in here probably have similar experiences,” he said. “So what are we going to do about it? We’re going to bring experts in. We’re going to talk about it. We’re going to continue to fight it. But ultimately, the responsibility starts here [points to himself] — starts with me. Most of you in here have been prescribed pain medicine at some point. See the difference is I choose not to take it because I’ve seen what it does. I know that I can set my jaw and make it through those three days. My wife says that I’m not normal; I explain to her that’s true, never claimed to be, but I’m not willing to take the risk.”

Todd Washam, director of industry and external relations for ACCA, also attended the congressional briefing that was sponsored by the Men’s Health Network in collaboration with the Congressional Men’s Health Caucus. During his testimony, Washam explained to the panel that HVACR technicians face a physically demanding job, and although safety measures are taken, injuries happen. 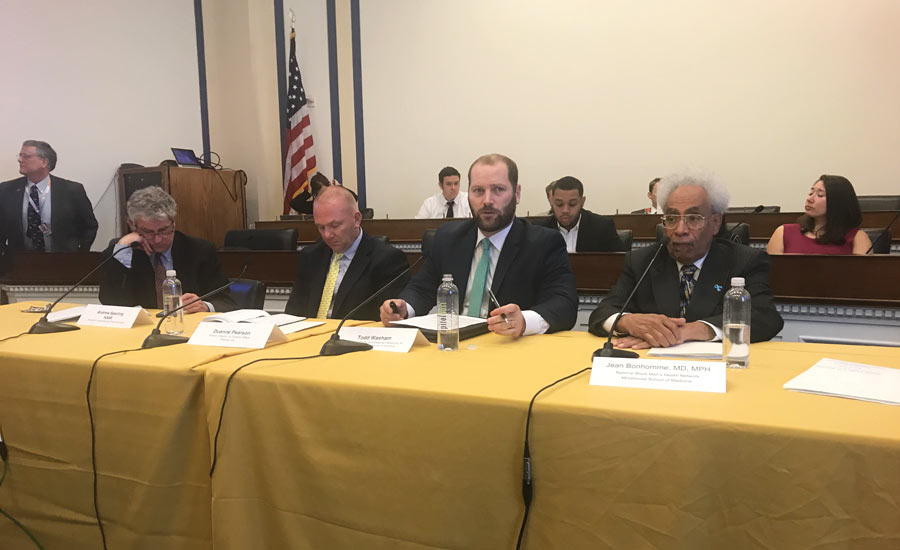 TAKING STEPS: Todd Washam, director of industry and external relations for ACCA, explains the Federated Insurance six-step approach to address drugs in the workplace to a congressional panel.

“One of our members told a story about how he had an employee who was being rushed, and that person subsequently became injured and [was]prescribed painkillers,” he said. “The injured HVACR technician became addicted, and the contractor lost his otherwise good employee. After finding that story was not an isolated incident, ACCA went about figuring out how to address this problem in the workplace. We knew we had to step up and start talking to our contractor members.”

Originally, the association began talking to the Men’s Health Network to discuss how to get ACCA members thinking about healthy minds and bodies. When the opportunity to participate in this panel presented itself with its connections to the shrinking workforce and addiction, opioid usage pushed further up the ACCA agenda.

Besides discussing awareness and addiction education, ACCA has partnered with Federated Insurance to craft a six-step approach, created specifically to help address drugs in the workplace (see sidebar).

IT’S NOT A MORAL FAILING

It’s an all hands on deck call as industries across the nation address the opioids that have earned the title of national epidemic. Each of those who testified to the congressional panel shared what was happening to them personally or in their sector of business. Jon Bonhomme’s, M.D., Masters of Public Health, testimony was different. Certified by the American Board of Addiction and an assistant professor at Morehouse School of Medicine, Bonhomme testified about the effects of addiction on the brain and took the time to define what true addiction meant.

“My presentation title, Addiction as a Brain Disorder, is a very important title, because people have thought of drug use as being primarily a moral failing or something of that nature or a character disorder,” he said. “But actually, there are documentable changes in the brain that take place with drug use, and I think that understanding that will lead to development of better treatments and a better understanding of how to deal with this problem. Addiction is defined as compulsion. It is continued substance use in the face of adverse consequences. The key to understanding addiction is that the person’s function deteriorates but their substance use continues.”

Bonhomme went on to clarify that taking pain medication does not qualify as an addiction. In fact, he pointed out that many will take pain medication, their performance will improve, and they will never become addicted. He stressed that it is the continued use of medication in the face of adverse consequences and deteriorating performance that defines addiction.

“You also have to understand substance tolerance,” he said. “The brain becomes resistant to substances that are taken. Generally speaking, a lot of medications, especially opioid pain medications, require an increasing dose with time. Some people mistake that for addiction.”

As his testimony continued, he discussed withdrawal, pseudo-addiction, and his concerns about the legalization of marijuana for recreational purposes. Near the end, he reminded the congressional panel and attendees that addiction needs to be regarded as a brain disease, not as a moral failing.

ACCA has partnered with Federated Insurance to craft a six-step approach, created specifically to address drugs in the workplace.

Contractors should have a clear, enforceable, written drug-free workplace policy that includes the purpose of the program (laws, regulations, organization goals); expectations for compliance (who, what, when, where); options offered for assistance (employee assistance programs, community resources); and consequences for violating the policy (discipline, referral for assistance, termination).

Contractors should provide employees with training that surrounds the policies being implemented. Training programs should highlight the benefits of a drug-free workplace. Employees should also be trained to spot potential signs of abuse by their co-workers.

Supervisors should receive additional training that takes unique characteristics of where their company is located into account to maximize the effectiveness of the programs offered. Some parts of the country are prone to higher rates of addiction, so supervisors in those locations should be highly trained on suspicious activities and how to confront drug-users.

Contractors must document which employees have completed the drug training program and reinforce, through routine communications, the benefits of working in a drug-free workplace.

In coordination with a good risk management plan, ACCA also recommends for contractors to create modified work duties for employees who have been injured. Allowing an injured employee to return to work is an important step in preventing addictions to pain-killing drugs because it allows the employee to maintain their regular schedule, which is important to their mental well-being.