This website requires certain cookies to work and uses other cookies to help you have the best experience. By visiting this website, certain cookies have already been set, which you may delete and block. By closing this message or continuing to use our site, you agree to the use of cookies. Visit our updated privacy and cookie policy to learn more.
Home » It Is Never a Good Idea for HVACR Techs to Mix Refrigerants
HVAC Residential MarketHVAC Commercial MarketRefrigerationAir ConditionersChillers & TowersRefrigerants

The last 30 years have been a bit of a rollercoaster as far as synthetic refrigerants are concerned. First, CFCs were phased out and replaced by HCFCs, which are now in the process of being phased out themselves. HFCs were created to take the place of HCFCs, but they, too, are being targeted for a phasedown and are likely to be replaced by HFO blends. While most a/c and refrigeration systems containing CFCs are no longer in use, contractors regularly work on equipment that utilizes HCFCs, HFCs, and HFO blends, which means they have to stock a plethora of different refrigerants in order to serve the various needs of their customers.

Unfortunately, this growing number of refrigerants has significantly increased the chances of a system being charged with multiple refrigerants. Mixing refrigerants can have an adverse effect on air conditioning and refrigeration systems, resulting in reduced efficiency, performance, and longevity. And it can create a safety hazard for the technician who may not know exactly what type of refrigerant a system may contain.

MIXING ON THE RISE

“Mixing of refrigerants has become more prevalent as the number of refrigerants in use has increased significantly,” said Adam Dykstra, chief growth officer, A-Gas, a refrigerant recovery and reclamation provider. “Over the last several years, we’ve certainly seen a rise in mixed refrigerants, both directly from systems, but more significantly, from recovery cylinders filled by technicians who have already recovered systems themselves.” 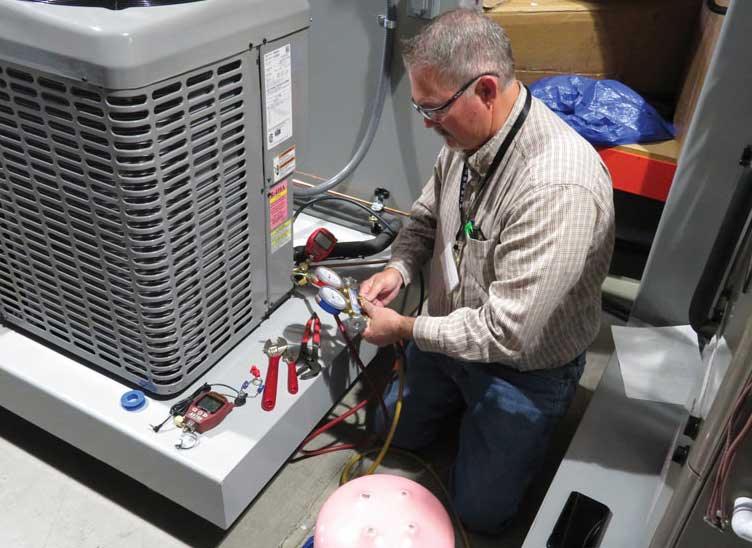 HARD TO MEASURE: Obtaining accurate measurements from a system, as shown here by Paul Delaware, a UA instructor from Local 469 in Phoenix, can be difficult if it contains mixed refrigerants.

“Most often, we find that local technicians compound the system mixture issues during recovery through a lack of quality refrigerant tracking and cylinder labeling,” said Dykstra. “The result is even higher levels of mixed refrigerant found in recovery cylinders.”

Another reason why refrigerant mixing is on the rise may be due to the belief that R-22 will no longer be available after 2020. But as John Maiorana, product support manager of Forane® Refrigerants, Arkema Inc., said, new R-22 is still available and will continue to be available until the last pound of inventory is sold. And of course, reclaimed R-22 will be available to service existing air conditioning and refrigeration systems long after 2020.

Some refrigerant blenders are also causing confusion by vaguely advertising that mixing R-22 with their refrigerant gas will not cause a problem, said Maiorana.

“Some of this advertising has been placed on social media and is described as ‘gas and go,’” he said. “This usually occurs during peak cooling months, when a contractor takes a shortcut and elects not to evacuate the system properly, leak check, fix, and then recharge the equipment.” 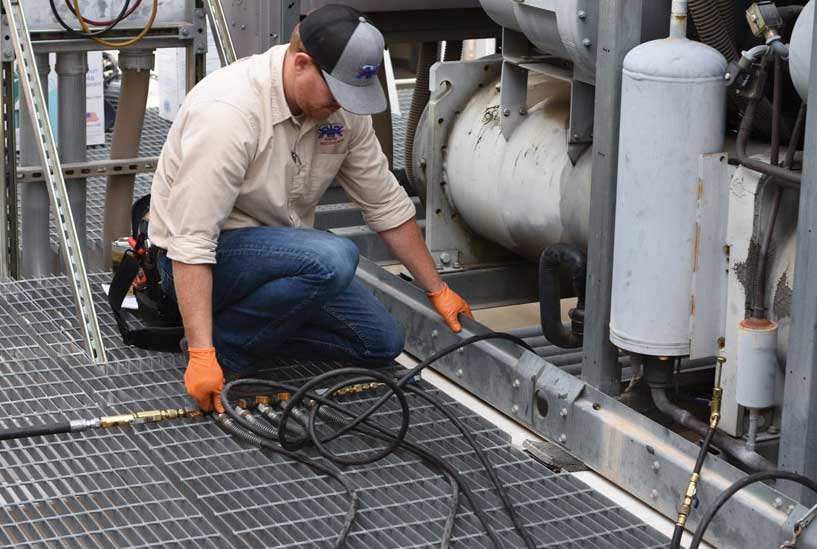 INCREASED MIXING: Over the last several years, refrigerant reclaimer A-Gas has seen a rise in mixed refrigerants, which its technicians — like the one shown here — work to restore to AHRI Standard 700 requirements.

“While mixing R-22 with any refrigerant designed to mimic R-22’s operating characteristics generally will not cause an immediate operational issue, it is against OEM guidelines and EPA [Environmental Protection Agency] requirements,” he said. “In addition, the consequences of field mixing refrigerants are difficult to predict and can vary from system to system.”

“In many cases, these tests are not done, and the most common measurement is the end-user’s comfort level,” he said. “Is the system blowing cold air? If it is, the end user is happy because it appears the system is working. But how long the unit will work, whether it is operating efficiently and properly, and how much additional energy the unit is using are another story.”

“Unfortunately, with the large number of substitute refrigerant options [for R-22] available, it is becoming more and more likely that the refrigerant contained in a system differs from the information on the nameplate,” Silberstein said.

And that is not a good situation; refrigerant mixtures of any kind will negatively impact the system, said Dykstra.

Mixed refrigerants can also affect technicians, as properly servicing a system under these circumstances can be difficult — and dangerous — to do.

“In order to obtain accurate saturation temperature information from the system for troubleshooting purposes, it is important for the technician to accurately identify the refrigerant that is contained in the system,” said Silberstein. “In addition, mixed refrigerants can result in excessively high system operating pressures, which may expose technicians to an increased risk of becoming injured if the refrigerant is unexpectedly released from the system.”

The growing use of flammable refrigerants creates an additional risk for technicians, noted Dykstra, as introducing these gases into any system not designed and approved specifically for their use can create a serious safety hazard.

“Some unapproved and deceptively labeled flammable refrigerants have also found their way into the market, which create a significant safety concern,” he added.

That is why it is important for technicians to verify the type of refrigerant in a system before working on it. Most of the time, technicians can trust the label on the system, but if there is any question, they should try to figure out whether mixed refrigerants could be a possibility. Unfortunately, this can be difficult to do because mixed refrigerants can create the same symptoms as other issues, including the presence of non-condensable gases and moisture, explained Dykstra.

For that reason, technicians may want to consider investing in a portable refrigerant identifier, which can be quite accurate. However, these tools can be expensive to purchase and maintain, said Dykstra, which is why if a refrigerant concern arises, whether it is caused by mixture, moisture, oil, non-condensable, or something else, the refrigerant should be recovered and replaced.

If a system is found to have mixed refrigerants, technicians — and end users — should be aware that compressor or system damage resulting from operating in that condition may void the equipment warranty, but this will vary from manufacturer to manufacturer, said Silberstein.

Once the refrigerant is recovered, it needs to be taken to a refrigerant reclamation facility, which will attempt to return the mixture to Air-Conditiong, Heating and Refrigeration Institute (AHRI) Standard 700, which specifies the purity requirements for refrigerants. In many instances, gases can be “unmixed,” but this requires time and energy, said Maiorana, and the reclaimer will have to make the decision as to whether or not it is cost effective to return the refrigerant to its virgin state. 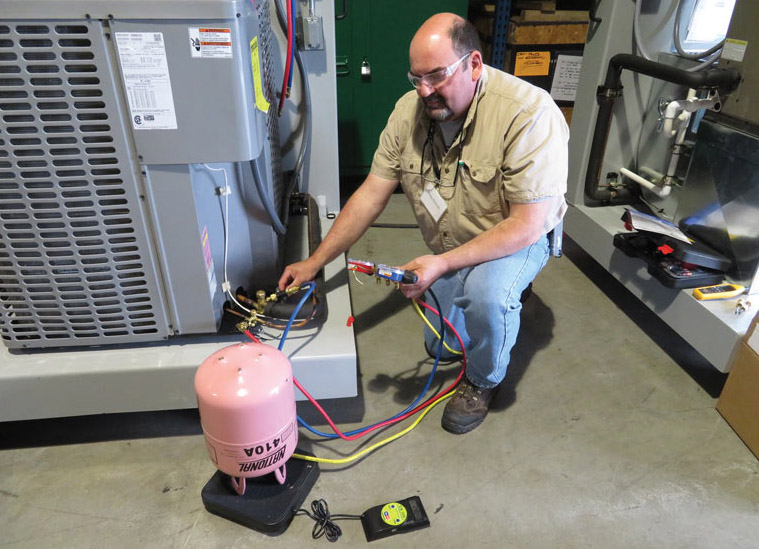 SAFETY FIRST: UA instructor Philip Roknich, from Local 130 in Chicago, demonstrates how to properly charge a system. To ensure system performance and technician safety, refrigerants should never be mixed.

Most reclaimers will attempt to separate incoming mixed refrigerants — even though it can be a complex and expensive process — because these gases are needed to bolster supplies of refrigerants that have either been phased out or are in the process of being phased out.

“Unfortunately, the ongoing phaseout does not seem to have had much impact on the yearly volume reporting from the reclaimers compared to the volumes needed to maintain a future supply,” said Dykstra.

That is why it is so important for technicians to responsibly recover refrigerant from systems before adding any type of replacement refrigerant. And Silberstein cautioned that if a system is retrofitted with a new refrigerant, it is imperative that the service technician properly label the equipment, notifying future service personnel that the refrigerant contained in a particular system differs from the refrigerant identified on the unit’s nameplate.

Taking a shortcut and mixing refrigerants in the field is never a good idea because not only can it damage equipment, it can create a safety hazard for technicians and imperil the supply of refrigerant that will be needed by the HVACR industry for years to come.