As regulations concerning the future use of HFCs continue to evolve, many users of commercial refrigeration have started exploring how other refrigerants with lower GWP could potentially meet their needs. Their choices are many, as manufacturers now offer equipment that utilizes natural refrigerants like CO2 or ammonia or hydrocarbons such as propane. For those not looking to invest in entirely new equipment, retrofitting with an HFO blend or converting to a lower-GWP HFC may be the right choice.

Determining which refrigerant may work best for an application can be challenging. While larger supermarket and restaurant chains usually have in-house personnel who help make this decision, they often turn to their local contractors for their advice as well. For smaller regional stores, bars, and restaurants, which typically lack in-house expertise, contractors play a larger role in making these types of recommendations.

Supermarket and store owners often ask Pat Welty, owner of SCR in St. Cloud, Minnesota, for his opinion regarding which refrigerant will work best for their applications. And his answer varies, as it depends on the owners’ goals as well as the application. 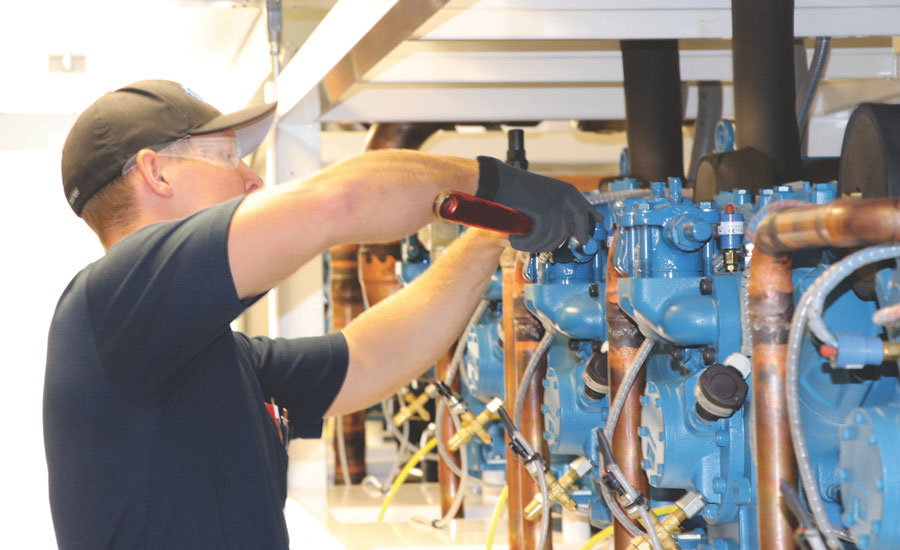 MAKING THE MOVE: CoolSys is working with many stores that are making the move to low-GWP refrigerants. Here, one of the company’s service technicians works on a refrigeration system.

“There are a lot of factors to consider when helping a customer make that decision,” said Welty. “Some are looking for the best possible solution for the environment, while others are more concerned with equipment longevity. I also get questions about how much service and parts will cost, as well as whether the refrigerant is readily available.”

Some customers are worried about making any changes, particularly since the court ruling that stated the Environmental Protection Agency (EPA) does not have the authority to delist HFC refrigerants.

“I think everybody’s taking a step back and waiting to see what will happen,” said Welty. “A year or so ago, the refrigerant issue was a larger discussion than it is today. End users are now wanting to go a little bit slower because of all the uncertainty going on with refrigerants.”

That is probably why many of Welty’s customers are taking a more incremental approach and converting their R-22 systems to R-407A. Some are choosing to gradually convert to HFO blends, while fewer still are considering CO2 transcritical systems — although Welty has been involved with installing CO2 systems in two supermarkets, one industrial specialty project, and an ice rink.

“There are some economic challenges we need to overcome before we’ll be able to get more CO2 systems installed,” said Welty. “For a new store, a CO2 system costs about 25 percent more than one using an HFO blend, and that’s too expensive for many end users.”

Joe Kokinda, president and CEO of Professional HVAC/R Services Inc., Avon Lake, Ohio, agrees that cost is a big factor as far as CO2 systems are concerned. He was involved with a store that was initially going to install a CO2 transcritical system, but then the equipment manufacturer suddenly raised the price, and the store owner decided on a different option.

“If you want CO2 to gain momentum, you’re not going to raise the prices,” he said. “That’s why nobody’s going with CO2 right now.”

That may change if utilities get involved and start offering incentives, but until then, Kokinda does not believe most store owners in the U.S. will embrace refrigeration equipment that utilizes natural refrigerants like CO2. 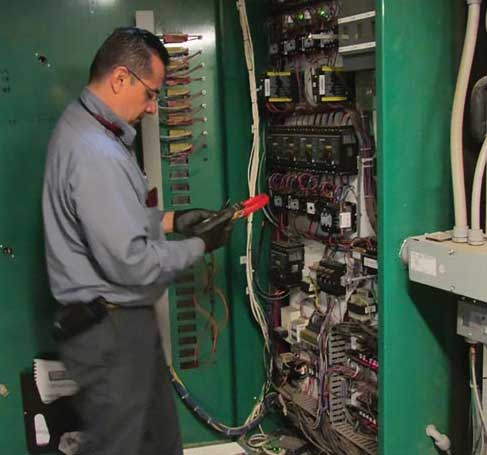 CUSTOMER CARE: Henry Garcia, a level 8 service technician with CoolSys, troubleshoots a refrigeration system. The company regularly works with customers to determine the proper alternative refrigerant to meet their goals.

“We all know that R-22 is going to disappear, and when that happens, most store owners are going to retrofit to an HFO blend,” he said. “Nobody’s going to jump on board with CO2 equipment because it is just too expensive.”

Indeed, most of Kokinda’s customers are choosing to move from R-22 or R-404A to an HFO blend, such as R-448A. He cites the European supermarket chain, Aldi, as being the way of the future in terms of refrigeration.

“Right now, Aldi is using HFO blends in their wall cases and walk-ins, while everything else on the sales floor utilizes propane.”

In fact, Kokinda bets that self-contained propane units will have the biggest impact on the U.S. refrigeration market in the future, particularly if industry groups are successful in getting the charge size for propane refrigeration equipment raised from 150 to 500 grams.

“Once that charge limit comes up, you better believe we’re going to be shifting to propane,” said Kokinda. “There’s no doubt about it. These units are so much simpler to install than a big rack system, and you don’t have to worry about redundancy. With these modular plug-and-play units, you bolt them together, and you can’t tell the difference. They look just like your local supermarket.”

Not only that, but self-contained propane units often cost less and require no piping or evacuation, added Kokinda. But most importantly, they do not require highly skilled refrigeration technicians to install them.

“We can put together a three-case lineup [of self-contained propane units] in four hours, so we can finish a remodel overnight,” he said. “Basically, the store closes, we yank out the old equipment, put in the new fixtures, and by morning, they’re down to temperature. That’s where we’re going as an industry — it’s going to be a plug-and-play world because the young kids are not interested in refrigeration.”

Things are a little different in California, which is looking to severely limit the use of HFC refrigerants in order to meet its climate goals. 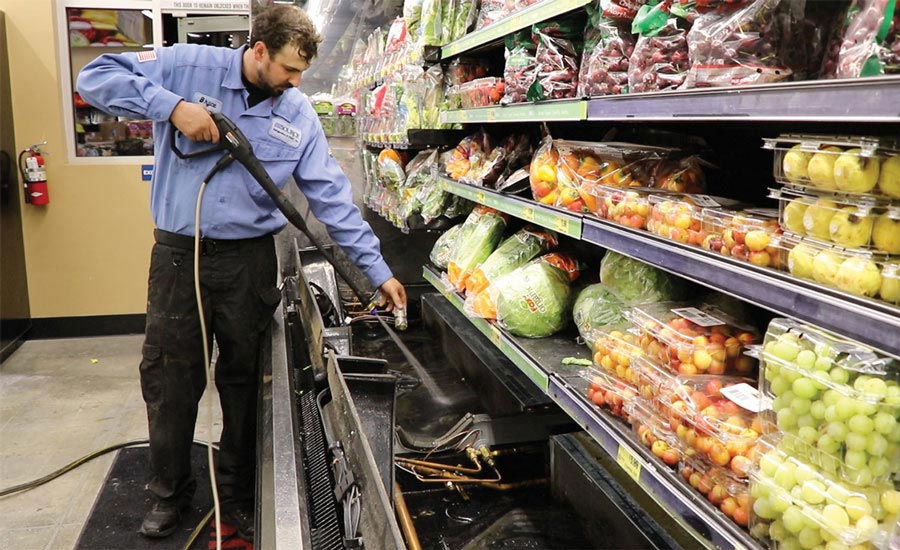 AU NATUREL: Cleaning out a refrigerated display case is Bryce Bean, a level 5 service technician with CoolSys. Many of the company’s largest customers have transitioned to refrigeration systems that utilize natural refrigerants.

Because of this, more store owners are making the move to low-GWP refrigerants.

In new construction projects, CoolSys operating companies have installed well over 50 refrigeration systems that utilize CO2 as the refrigerant in some form, including one commercial supermarket system that utilized ammonia as the cascade side of a CO2 system.

“Currently, one of our operating businesses, RSI in Sacramento, California, is installing the largest CO2 system in the world at a cold storage facility in Stockton, California,” said Beitler. “It has over 2,400 hp, 1,400 tons of refrigeration capacity, and multiple parallel refrigeration rack systems.”

As can be imagined, there is a learning curve involved in designing systems that utilize CO2. That’s because CO2 systems have different operating pressures and require pressure relief systems that are somewhat different than those used in traditional synthetic refrigerant systems, said Beitler.

In addition, there are different grades of CO2, and it is necessary to understand the proper grade to use in a system. There are also slightly different pressure testing protocols for CO2 systems than with traditional synthetic refrigerants, said Beitler.

“The manufacturers of CO2 systems have taken the lead in providing installation instructions, service and maintenance training, and field support that allows contractors to gain needed knowledge in support of these systems,” he said. “Thoroughly understanding the codes and parameters required by the equipment manufacturers has allowed installation to become more routine.”

Regardless of geographic location, changing refrigerant regulations will have an impact on both refrigeration contractors and their customers. Learning about — and receiving training on — all the different options available will be the best way for contractors to help end users make the most informed decision.

Making the Move to Alternative Refrigerants

There are many factors to consider when helping customers choose an alternative refrigerant. Here are a few points that Bryan Beitler, vice president and chief engineer for CoolSys in Brea, California, suggests considering before coming up with a recommendation.

It is necessary to take into account many different parameters when addressing a plan to either convert to natural refrigerants, which requires an upgrade of the entire mechanical system, or simply converting refrigerants, stressed Beitler. If the end user does not have the budget for a complete system replacement, then HFO blends may be a suitable option.

“Purchasing the lowest GWP refrigerant on the market is an alternative to going to a natural if that is all that an end user’s budget permits, but it is not a solution that is future proof, as we don’t know what future regulations will come into play,” said Beitler. “But given the choice to use a high-GWP synthetic refrigerant like R-404A, an HFO blend with a lower GWP — such as R-449A or R448A — is a better solution.”