LOUISVILLE — SkillsUSA came to the Derby City on June 25-29 for its 54th annual National Leadership and Skills Conference, the world’s largest showcase of skilled trades. Quality career and technical education and contests were the centerpiece of the conference. More than 18,000 students, teachers, education leaders, and representatives from 600 national corporations, trade associations, businesses, and labor unions participated. The highlight, as always, was the annual SkillsUSA Championships with 102 hands-on skills and leadership competitions. Championships were open to the public 9 a.m. to 5 p.m. on Wednesday, June 27, and Thursday, June 28, and were held at the Kentucky Exposition Center, the Crowne Plaza Louisville Airport, and the Kentucky Regional Fire Training Academy.

The HVAC competition showcased nine test events in which 31 secondary and 22 post-secondary contestants vied for top honors. Contestants represented first-place winners from previous state competitions. For example, Minnesota post-secondary was represented by Steve Austin, a 22-year-old who had just graduated his two-year program at Hennepin Technical College – Eden Prairie, Minnesota. Austin bested approximately 16 students from four Minnesota schools with a unique approach to HVAC diagnostics — though his hearing is excellent, Austin has no voice and, therefore, must communicate to co-workers and customers via a voice app on his phone. (Visit https://bit.ly/2A40HDQ for the full story on Steve Austin.)

Because of the extra communication challenge, Austin actually had two judges with him at all times. The common procedure is for one judge to be paired with one contestant at all times to answer any questions, judge performance on all nine test events, and ensure strict adherence to testing protocol as established by the technical committee.

Warren Lupson is a near 20-year veteran of SkillsUSA, tracing its beginnings to the Vocational Industrial Clubs of America (VICA) program. He has served as a technical committee advisor, judge, and liaison between SkillsUSA and the HVACR industry through his association with both ACCA and Air-Conditiong, Heating and Refrigeration Institute (AHRI).

“The industry needs to step up even more for SkillsUSA,” said Lupson. “The amount of commitment required is tremendous, but the rewards are great, and the consequences if we don’t train these young people are dire for our industry.” 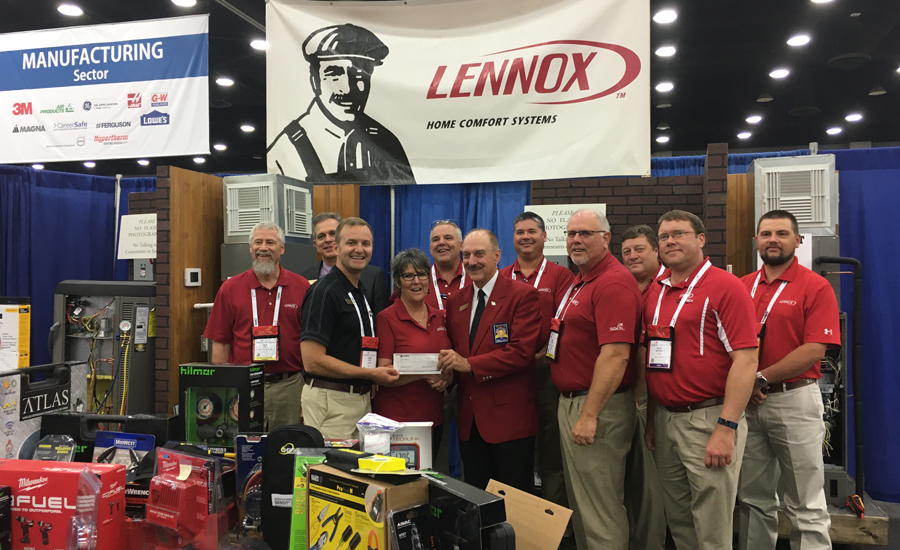 Red Shirts: A number of red-shirted Lennox Industries field service consultants who served as judges are pictured with Michele Niekirk, also of Lennox. The company presented a check for $10,000 to the SkillsUSA organization at the National Championships on June 28. Left of Niekirk is Chris Arvin, Caterpillar, who is current SkillsUSA president of the board, shaking hands with Tim Lawrence, executive director SkillsUSA. Also pictured, in the gray suit, is Chuck Wallace, Maryland Department of Education, secretary, SkillsUSA.

The Harris division of Lincoln Electric provided all supplies for the brazing contest, and manufacturing representatives from Lennox, Carrier Corp., Haier, and Emerson Climate served as judges at the various stations and were also helping with administrative duties.

Michele Niekirk is a Lennox administrative assistant for technical support in Richardson, Texas.

For the past five years, she has managed much of the contestant area and has served on the HVAC technical committee for SkillsUSA.

“It takes the efforts of many people to put this together every year and countless hours of preparation,” said Niekirk. “It’s all worthwhile, as these are the people who will lead our industry someday.”

Niekirk also confirmed that the first-, second-, and third-place winners in both categories won industry tools and supplies worth thousands of dollars (approximately a $5,000 value for the first place prize). All items were donated by a variety of HVAC manufacturing companies.

Over the years, Lupson said he has noticed that there is always a large variation between students’ skills, and he attributes that to the inconsistency of HVAC programs curriculums. Students learn what the instructors teach, and not all instructors are conveying the same information.

“He was told how to do that on Tuesday, but by the time he gets to the event station, he falls back into the way he learned it in school. Or perhaps the instructor taught the correct method, but the student never picked up on it. Still, you’d think that if he was No. 1 in the state, he would know how to purge a line. That’s what we are dealing with in our industry. That’s why we so need manufacturers to become more interested in career training. We have to teach the right skills.”

One of the event test stations involves a refrigerant line purge, where Lupson said he observed the most extreme variance in skills. All students are verbally instructed during a mandatory classroom session that a nitrogen purge is a requirement for proper evacuation procedures. However, Lupson witnessed one student completely ignore the nitrogen purge requirement, even though the brightly colored nitrogen line lay in his work space, and another student submersed the line set section, thus adding even more moisture problems to an improperly evacuated system.

“He was told how to do that on Tuesday, but by the time he gets to the event station, he falls back into the way he learned it in school,” he said. “Or perhaps the instructor taught the correct method, but the student never picked up on it. Still, you’d think that if he was No. 1 in the state, he would know how to purge a line. That’s what we are dealing with in our industry. That’s why we so need manufacturers to become more interested in career training. We have to teach the right skills.”

ACCA is a SkillsUSA supporter; this year, the organization paid for two days of student lunches, lunch for the advisor and instructor meeting, and lunch for the technical committee meeting.

“We need more industry associations and manufacturing companies to become a part of this event,” said Lupson. “This is where we can find out what our future employees are learning and what they are not learning. We can shape this industry by being a part of SkillsUSA.”

The SkillsUSA Championships is a workforce development event for middle-school, high school, and college/post-secondary students enrolled in public career and technical education programs. It is considered the largest skills competition in the world and the single greatest day of industry volunteerism in America, at an estimated cost of more than $36 million. SkillsUSA adds contests to the championships each year to meet the demands of new or expanding technical careers — the instructional programs represented 130 different occupational areas this year.

Started in 1967, the SkillsUSA Championships now features more than 6,500 competitors in 102 hands-on skills and leadership contests. The championships require an immense amount of equipment and materials, more than 12,000 lunches to be served to competitors and judges, and nearly 60,000 volunteer hours.

More than 360,000 students and advisors join SkillsUSA each year, organized into more than 19,000 local chapters and 52 state and territorial associations. In 2016, 20,365 teachers served as professional members and advisors. Combining alumni membership, the total number impacted is more than 420,000 people annually; SkillsUSA has served more than 12.5 million members since its founding in 1965.

SkillsUSA empowers its members to become world-class workers, leaders, and responsible American citizens. SkillsUSA improves the quality of America’s skilled workforce through a structured program of citizenship, leadership, employability, and technical and professional skills training. SkillsUSA enhances the lives and careers of students, instructors, and industry representatives as they strive to be champions at work. More than 600 business, industry, and labor organizations actively support SkillsUSA at the national level through financial aid, in-kind contributions, and involvement of their people in SkillsUSA activities.