Section 179: A Commercial HVAC Contractor’s Diamond in the Rough

While the reduction of the corporate tax rate from 35 percent to 21 percent and the simplification of individual tax brackets garnered most of the headlines following the passage of the 2017 Tax Cuts and Jobs Act, there’s a hidden jewel tucked within the tax reform package that commercial HVACR contractors need to be aware of: the expansion of Section 179.

The expansion of Section 179 grants commercial businesses the ability to immediately deduct up to $2.5 million in qualifying nonresidential HVACR equipment purchases with a $1 million cap, effective Jan. 1.

Many HVACR industry associations, including representatives from ACCA; Heating, Air-conditioning & Refrigeration Distributors International (HARDI); and Sheet Metal and Air Conditioning Contractors National Association (SMACNA), have been working on this initiative for more than a decade. Now that it’s been enacted, many believe this incentive could provide the financial motivation necessary for commercial clients to replace their old HVAC systems with newer, more efficient equipment.

HOW DOES IT WORK? 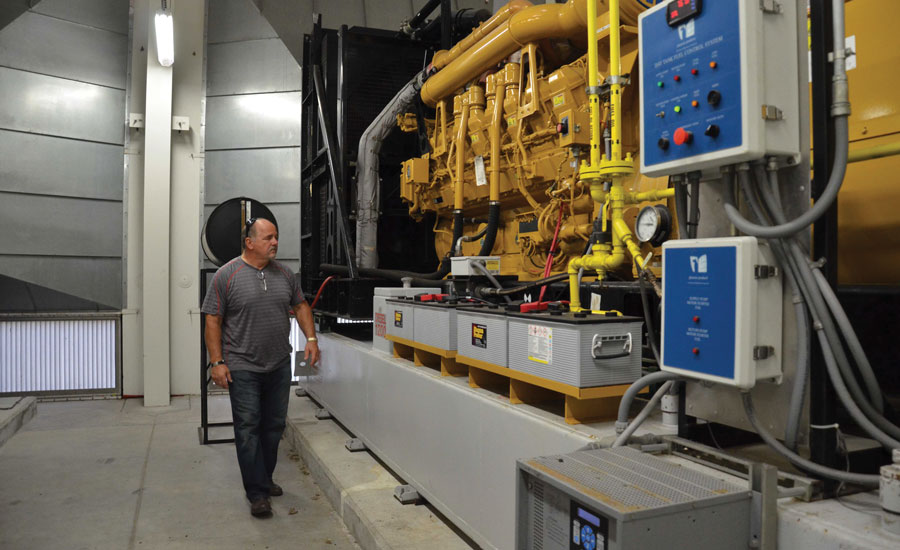 SAVVY SALESMEN: The tax savings may make savvy contractors more competitive, as contractors who utilize the newfound tax savings when bidding jobs may offer a lower bid than those who do not.

All machinery and equipment have different useful life spans under the Internal Revenue Code. If a building owner purchased a $39,000 piece of equipment, and it had an estimated life cost of 39 years, the equipment could be depreciated at $1,000 a year for each of those 39 years.

Section 179 of the IRS Code was created in 1958 to assist small business owners by allowing them to take depreciation deductions for certain assets in one year rather than depreciating those items over a longer period of time. The 2017 tax reform bill incorporated HVACR equipment for the first time and increased the maximum deduction from $500,000 to $1 million.

Before receiving the Section 179 deduction, HVACR improvements made to nonresidential properties were depreciated over a 39-year period. The change to immediate expensing provides an exceptional opportunity for contractors and business owners.

For example, assume a business owner installs a new heating and air conditioning rooftop unit that carries equipment and labor installation costs of $200,000. Under previous depreciation rules, the owner could only deduct around $5,130 per year. At a 35 percent tax rate, that owner would only save around $1,795. Under the new law, that owner may now save $70,000 in taxes immediately on that same $200,000 purchase.

Don Langston, president and CEO, Aire Rite Airconditioning & Refrigeration Inc., Huntington Beach, California, and immediate past chairman for ACCA, said including HVACR costs into the Section 179 expansion is a huge opportunity for his company. 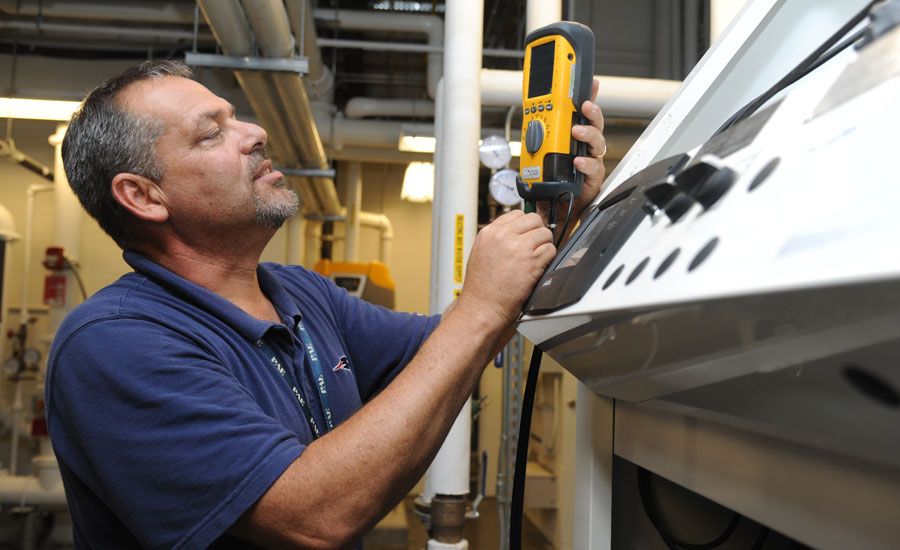 IMMEDIATE EXPENSING: For the first time, the expansion of Section 179 of the IRS Code allows small business owners to take depreciation deductions for all nonresidential HVACR equipment purchases immediately.

“We’re a commercial air conditioning and refrigeration company that does a lot of $10,000, $15,000, and $20,000 refrigeration jobs,” he said. “Those types of jobs qualify for this — it’s not just the large chillers and rooftop units. This is a very lucrative opportunity that benefits the entire HVAC channel.”

While the opportunity exists, Langston said it often takes a great deal of communication to connect with the decision-makers in commercial HVACR settings.

“In the corporate world, decision-makers often don’t take tax implications into their thought processes,” he said. “Too often, decisions are made based on budgets. So, it’s a challenge to educate the right people at the right time regarding this opportunity.”

Langston and his team have started carrying around one-page informational pieces that demonstrate the potential savings available through this incentive.

“If you can lower a customer’s hesitation by clearly demonstrating that this will save them a ton of money, that’s where benefits like these are absorbed,” Langston said. “Oftentimes, you have to extend a bit of financial literacy regarding HVAC equipment, because the only time they want to deal with HVAC expenditures is when they have to. The better job of demonstrating the short- and long-term savings in an executive summary, the better chance you have of getting somewhere with this.”

The recently passed Tax Cuts and Jobs Act included a provision to allow HVAC products to be immediately expensed. Under Section 179 (26 U .S. Code § 179) Small Business Expensing, all componen ts of a “heating, ventilation, and air-conditioning” system can be expensed in the first year instead of being depreciated over 39 years. 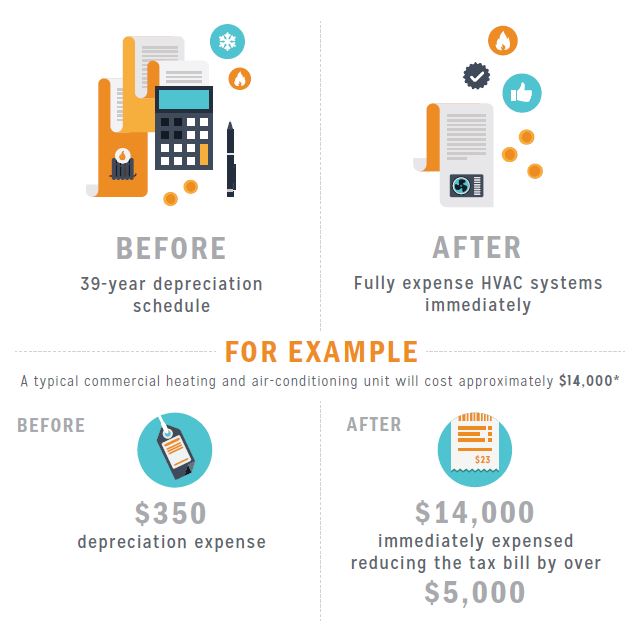 SEE THE DIFFERENCE: Heating, Air-conditioning & Refrigeration Distributors International (HARDI) created this infographic as an informational piece designed to inform contractors of the benefits afforded through the expansion of Section 179.

While the law has been on the books for four months, many contractors are unaware that the incentive even exists.

“I’ve spoken with very large contractors who have $2 million monthly sales goals that are unaware of this incentive,” said Barton James, senior vice president of government relations, ACCA. “If you’re a technician or someone selling commercial HVAC equipment, and you’re talking with a customer who has a piece of equipment that’s past its lifespan, you can say, ‘Stop putting Band-Aids on this, Johnny; it’s time to replace it. Toss out that energy hog, and replace it today while the government’s offering this significant cost savings.’”

Todd Washam, director of industry relations, ACCA, said the organization has shared the benefits of this incentive with all its corporate partner OEMs and encouraged them to forward the information to their dealer networks. ACCA has also connected with other trade associations representing food service, fitness organizations, facility managers, and more. 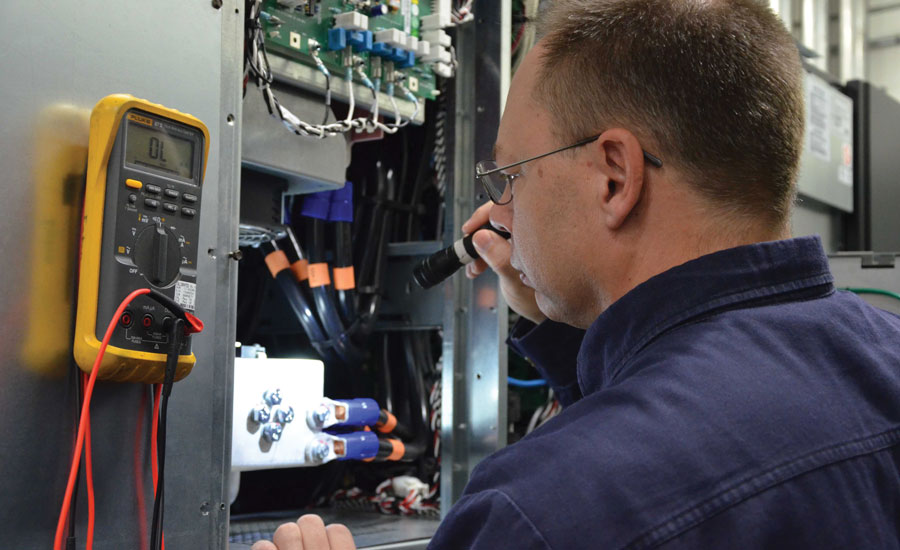 LACK OF AWARENESS: While nonresidential HVACR equipment has been permitted immediate expensing since Jan. 1, many are concerned that too many contractors remain unaware of the incentive.

“Contractors need to look at their commercial customers who they have service agreements with and say, ‘Hey, new tax laws are here, and you can fully expense investments in new HVAC systems,’” Washam said. “Contractors should run this like a grass-roots campaign. Emails and letters should be shared with everyone in their operations.”

Stan Kolbe, director of legislative and political affairs, SMACNA, said contractors not only need to be fully informed themselves, but they’re the ones who are largely carrying the responsibility for informing clients, business owners, and building management decision-makers.

“Our contractors are quickly becoming more aware of this, as we made this a key part of the tax bill for over a year, and they’re presenting and featuring the new HVAC expensing incentive more and more before clients who own buildings, but the response they’ve gotten is, ‘Are you sure this is a legitimate item for expensing?’” Kolbe said. “And members of Congress often don’t really understand how these transactions work or are implemented. To them, it’s a simple business decision by an informed building owner. One member of Congress told me that it should be automatic implementation for this incentive. But what’s really happening is the contractors are most often the first to inform facility managers of this attractive incentive, and then they’re responsible to fully explain exactly how it works. The building owner is often an investor, investment group, lawyer, etc., who may live in different cities or out of state. There are varied levels of management that contractors have to get through before they’re able to share this with the proper decision-maker in larger, commercial enterprises.”

While marketing and arranging these transactions may take some energy, Kolbe believes the reward is well worth the effort and the resulting boost to the efficiency, IAQ, and carbon footprint of these commercial and public building spaces.

“Honestly, the timing couldn’t be better,” he said. “The real estate market is fairly tight, and building values are spiking in most major metropolitan areas. Buildings are not staying on the market very long. The stars have lined up regarding the economy, profitability, and marketability. Interest rates are still low, and people are eager to spend on often-delayed-but-necessary building upgrades. With all these factors in mind, contractors are quickly learning how to market the 179 expensing for HVAC upgrades and explaining to owners that this is a great way to invest their money.”

HARDI has been working on including HVACR equipment into Section 179 for several years. Now that it’s come to fruition, the association has created an infographic that plainly describes the benefits of the Section 179 expansion and has communicated its benefits directly with its members.

“This is a huge win for distributors and the industry as a whole,” said Alex Ayers, director of government affairs, HARDI. “The language in the bill allows an owner to deduct all HVAC equipment, including installation, immediately. This is a big opportunity that our members have never had before.

“I’ve spoken with a few contractors who are offering salesmen $25 or $50 gift cards if they’re able to get their foot in the door regarding expensing,” he said. “If you’re a salesman, and you’re able to gain the attention of 10 companies, that bonus adds up quickly.”

Schoening said the organization is eager to capitalize on this legislative victory.

“We’re very happy to see Washington approve this incentive and excited at the opportunities it offers our members and the entire industry,” he said.

WHAT DOES THE CPA SAY?

“When contractors are bidding on a job, if they know this benefit exists, and they bring it to the owner’s attention, that may make them the lower bidder rather than the higher bidder,” he said “This incentive will likely increase the HVACR business in general.”

Knowing that the pending tax reform was likely going to lower the tax brackets, many savvy business people likely deferred as much income as they could from 2017 to 2018, which furthers the potential benefit this Section 179 change could have on the HVACR industry.

“Business people who deferred income from 2017 to 2018 will likely have a lot of excess income rolling in in 2018,” Eager said. “Section 179 allows them a great way to offset all that extra income. If you had the option of deferring $1 million to 2018, you can completely cover that income up by using Section 179 deductions. You could have spent $400,000 in taxes in 2017 on that $1 million, but, instead, you pushed that money into 2018 at a lower tax bracket. Now, you can put that $400,000 that you saved in tax expenses and put it toward new HVACR equipment purchases, which will help cover up that deferred income you pushed into 2018.”

Eager said it’s important for contractors to act on this provision because its future is unclear.