Congressman Questions the EPA about HFCs 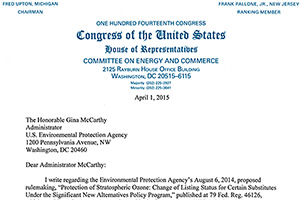 In April, U.S. Rep. Ed Whitfield, R-Kentucky, chairman of the Subcommittee on Energy and Power of the House of Representatives’ Committee on Energy and Commerce, sent a nine-page letter to Gina McCarthy, administrator of the U.S. Environmental Protection Agency (EPA), mapping out a number of significant concerns he had with the EPA’s rulemaking, “Protection of Stratospheric Ozone: Change of Listing Status for Certain Substitutes Under the Significant New Alternatives Policy Program,” which allows the agency to restrict the use of hydrofluorocarbons (HFCs) and delist their uses in certain applications.

“There are significant concerns about the consequences of the proposed rule, and I write specifically to request additional information related to this rulemaking,” wrote Whitfield in the letter.

He acknowledges the proposed compliance requirements are not feasible and would cause considerable harm, result in economic job losses, and may increase — not decrease — risks to the American public. Whitfield said this opinion was the consensus of the most affected industries, including the air conditioning and refrigeration sectors.

“I believe the proposed rule is an unlawful attempt by the EPA to set global-warming policy using Clean Air Act authority not intended for that purpose.”

• Compliance challenges: These include unrealistic deadlines, potential conflicts with other regulations, and concerns with alternatives. Whitfield specifically cited the Jan. 1, 2016, deadline for commercial refrigeration equipment as one of the most problematic aspects of the proposed rule.

• Costs: Whitfield noted the EPA’s preliminary analysis of the proposed rule projects costs no higher than $30.5 million; meanwhile, Air-Conditioning, Heating, and Refrigeration Institute (AHRI) representatives said its member companies will commit to spending up to $5 billion over the next 10 years on research and development and capital expenditures related to low-GWP (global warming potential) technologies.

• Environmental consequences: According to Whitfield, the proposed rule projects modest reductions in greenhouse gas emissions that may be at least partially offset by increases in other emissions, such as those caused by the use of what is likely to be less-efficient equipment.

• Legal questions: “By now, the process of replacing ozone-depleting substances is virtually complete,” Whitfield wrote. “At this point, the Significant New Alternatives Policy Program [SNAP] should not be expanded an additional step to replace previously approved alternatives to ozone-depleting substances. For this reason, as a general matter, the proposed rule seeking to delist HFCs based on their global warming potential does not appear to be authorized under the Clean Air Act.”

When contacted by The NEWS, an EPA spokeswoman said, “We will review Rep. Whitfield’s letter and respond accordingly. We proposed the SNAP Change of Listing Status in July 2014 and we’re working to finalize it. Through this action, the EPA is proposing to prohibit the use of certain chemicals that significantly contribute to climate change where safer, more climate-friendly alternatives exist. This is the agency’s second action aimed at reducing emissions of HFCs, a class of potent greenhouse gases, under President Barack Obama’s Climate Action Plan. This proposed action is estimated to reduce greenhouse gases by up to 42 million metric tons of carbon dioxide equivalent by 2020, equal to the carbon dioxide emissions from the annual electricity use of more than 5 million homes. We are carefully considering all comments as we develop the final rule.”

“We’re pleased Congress has taken an interest in this very important issue,” said Stephen Yurek, president and CEO, AHRI. “Our industry has been proactive in researching and developing alternative refrigerants to the current HFCs, and we will continue to do that, but it is a mystery to us why, if it took 25 years to transition from HCFCs [hydrochlorofluorocarbons] to the current HFCs, the EPA thinks we can transition some equipment from HFCs to alternatives in less than 18 months.

“Our commercial refrigeration manufacturers frankly deserve a lot better than this proposed rule,” Yurek added. “They have moved from CFCs [chlorofluorocarbons] to HCFCs to HFCs in an orderly and honorable manner, and they are continuing to research and develop products that use alternatives that have lower global warming potential and are efficient. These changes do not happen overnight, as the EPA and U.S. Department of Energy [DOE] well know. We are asking for a reasonable amount of time to make these labor-, time-, and cost-intensive changes. Many of our commercial refrigeration manufacturers are small businesses for whom research and development dollars are limited. They deserve time to get this right.”

“It highlights the fact that one federal agency is pushing more rigorous energy-use standards on air conditioning and refrigeration appliances without regard for another agency’s actions to restrict the use of efficient refrigerants. It also poses important questions about how the EPA conducted the rulemaking and whether there was a proper assessment of the impact on small businesses. The rulemaking process is complex, but it’s important that agencies meet their obligations under the Administrative Procedures Act and the Regulatory Flexibility Act.”

Rob McArver, vice president of government relations, Association of Home Appliance Manufacturers (AHAM), said his organization’s members are affected by the EPA SNAP proposal mainly in their use of HFCs as a foam-blowing agent, for the insulating foam used in the walls and doors of refrigerators and freezers.

“Whitfield’s letter hits a number of points on which we share concerns, from the basic question of whether the EPA has the legal authority to do what it’s doing with HFCs under the proposal to the more standard issues of determining the true environmental benefit that would be derived from the change, the critical question of timing, and some issues with technical feasibility and availability of the alternatives that would be required if the proposal were to go into effect by the date suggested,” McArver said.

He added, AHAM’s largest concern with the EPA’s proposal is the transition date. The proposed deadline to transition away from HFCs as a foam-blowing agent in domestic refrigeration is Jan. 1, 2017. However, the DOE’s next efficiency standard for refrigerators is anticipated to be in 2020, and it’s critical that these interrelated regulatory dates be coordinated.

According to McArver, certainty is important to any manufacturing industry, and the EPA’s “overly expedited and not clearly justified” 2017 deadline has the potential to significantly impact his members’ manufacturing plants and operations.

“In addition to the costs and technical challenges of accelerating our current transition, we have real concerns about the proposed timeline effectively eliminating options and leaving us no choice but to use a single, more expensive alternative,” noted McArver.

“All of the research and development work and planning our members are doing to transition from HFCs to different foam-blowing agents revolves around that anticipated 2020 date for a new refrigerator efficiency standard by DOE,” McArver said.

“We were able to show the agency our members have made significant transitions away from HFCs in this application. It validates our suggestion that our members are well underway to making the transition, but it also underscores that we do not anticipate being 100 percent out of HFCs in foam until 2020.”

Ultimately, McArver is optimistic the letter will have an effect.

“I think the chairman’s letter has raised a number of very interesting and important questions,” he said. “The EPA may have already given them some due consideration, but it will be helpful to the overall process to see what their response is to chairman Whitfield.”

A-Gas Teams Up with Contractors in Refrigerant Reclamation Efforts