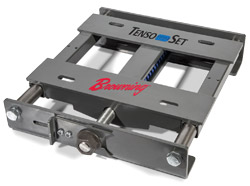 Browning introduced an expanded range of sizes for its self-tensioning Tenso-set motor base. The expanded product range includes up to National Electrical Manufacturers Association (NEMA) 447 and equivalent International Electrotechnical Commission (IEC) motor frame sizes. The Tenso-set base is designed as a drop-in replacement for most standard motor bases and utilizes the same jackscrew design to adjust and hold tension on the belt. The Tenso-set base also includes a coil spring inside the screw housing that pushes against the carriage to maintain tension as the belt naturally breaks-in and seats itself further into the sheave groove due to loss of mass. The Tenso-set design helps eliminate the need for frequent belt re-tensioning during the first 24 hours of run time and beyond. Enhancements to the Tenso-set base include features that improve the speed and safety of belt changes.