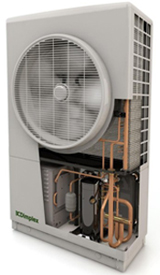 Frigesco has been awarded new UK Department of Energy & Climate Change (DECC) funding of £102,000 to develop a flash defrost system for use in air-source heat pumps (ASHPs).

David Walter, managing director of Frigesco, explained, ”Coils on ASHPs operating in cool conditions (below 7°C) in humid climates quickly ice up, and need to be regularly defrosted to maintain performance and reduce energy use. Existing approaches consume extra power, which can account for a significant component total energy use, reducing their efficiency.

“Frigesco’s system saves all the electrical power normally used for defrost, so applying it to ASHPs should deliver a significant increase in energy efficiency and an associated reduction in grid carbon dioxide emissions. It is a very exciting further application for flash defrost, and we believe it has great potential.”

The project involves designing and building a flash defrost system which can be built into new ASHP units. It will be trialed with a production version of a Glen Dimplex A16M ASHP, whose performance and energy characteristics have been documented across the climate spectrum.

The tests will be repeated and recorded after the unit has been fitted with the Frigesco defrost system, and the effect on annual energy consumption and carbon dioxide emissions established to EN14511:2013 standards.

Frigesco received DECC funding of £145,000 in 2012/13 to support its development of a flash defrost for use in refrigerated display cabinets. Field trials have been taking place in supermarkets in the UK, mainland Europe, the U.S., and South Africa, with results expected to be complete by the end of the first quarter of 2015.

Its latest project on ASHPs will begin in 2015, and last for 12 months.