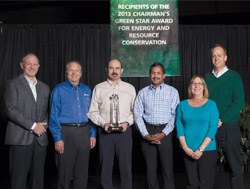 The 1,100 Ashland City employees were recognized by chairman and CEO, Ajita G. Rajendra, in a special ceremony recently.

“Ashland City is one of the largest water heater plants in the world, and the work you have done to conserve resources is truly impressive,” Rajendra said in announcing the award. “Equally as important, you have made a point of involving the entire team in the effort, and this has multiplied the impact throughout the facility.”

A.O. Smith created the Chairman’s Green Star Award in 2009 to encourage natural resource conservation efforts throughout the company. The award is earned by the plant that achieves the most year-over-year reductions in natural gas consumption, electricity usage, and water consumption. A total of 15 facilities worldwide competed for this year’s award.

Individual initiatives throughout the 1.5 million-square-foot facility focused on saving electricity, conserving water, and increasing the amount of material the residential water heater plant recycles, and these initiatives have had a major impact, according to Kevin Harrell, environmental safety and health engineer in Ashland City.

“There have been a number of projects aimed at resource consumption and energy consumption,” Harrell observed. “Over the last few years, we have made an effort to coordinate those activities.”

As a global water technology company, A.O. Smith has emphasized making the most efficient use of its water resources and finding ways to save water. In Ashland City, this translated into modifying the process the plant uses to wash residential water heater tanks. The team introduced a reverse cascading approach to the four-stage tank washer so that rinse water used in the later stages is pumped to earlier stages of the process. This reduces the need to refill tanks, not only saving water, but also the amount of detergent needed in the cleaning process.

As a result of this process change, Ashland City reduced its water usage by approximately 36 percent with annual consumption down nearly 21 million gallons.

To reduce electricity consumption in the plant, the team installed high-efficiency electric motors on equipment and conveyors, as well as high-efficiency, low-watt lighting in the plant and distribution center. As an added conservation effort, the team installed motion sensors so that lighting shuts down during inactive times. Electricity usage has declined nearly 20 percent in the Ashland City plant.

The Ashland City leadership team, encouraged by plant manager Keith Auville, enlisted the support of employees in its energy conservation efforts. During department meetings throughout the facility, employees were asked to shut down equipment, fans, and heaters at the end of their shifts to reduce energy usage and cost.

“In a facility this size, if you leave the equipment running, you can waste a lot of energy,” Harrell observed. “It was not difficult to get our employees to participate in this initiative, and now it’s a part of their standard operating procedures.”

In addition to electricity and water, the Ashland City team has reduced its annual natural gas consumption nearly 12 percent.