Energy 2030 On the Road Campaign Stops in New York City 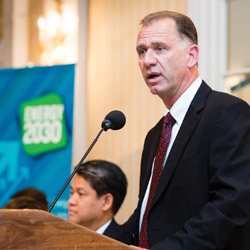 John Galyen, president, Danfoss North America, addressed energy productivity at the Alliance to Save Energy’s (ASE’s) Energy 2030 On the Road campaign, Sept. 29, in New York City. According to the ASE, achieving the campaign’s goal would save $327 billion annually in avoided energy costs, create 1.3 million jobs, reduce imports to a mere 7 percent of overall energy consumption, and lower greenhouse gas emissions by as much as one-third of the level emitted in 2005.

“Both short- and long-term approaches are needed to double energy productivity by 2030,” Galyen said. “Progress is being made with regulations and standards, but we are approaching technological efficiency limits. The short-term approach will take advantage of available and proven, yet under-deployed, technologies, such as variable-speed technology, energy recovery, and renewables.”